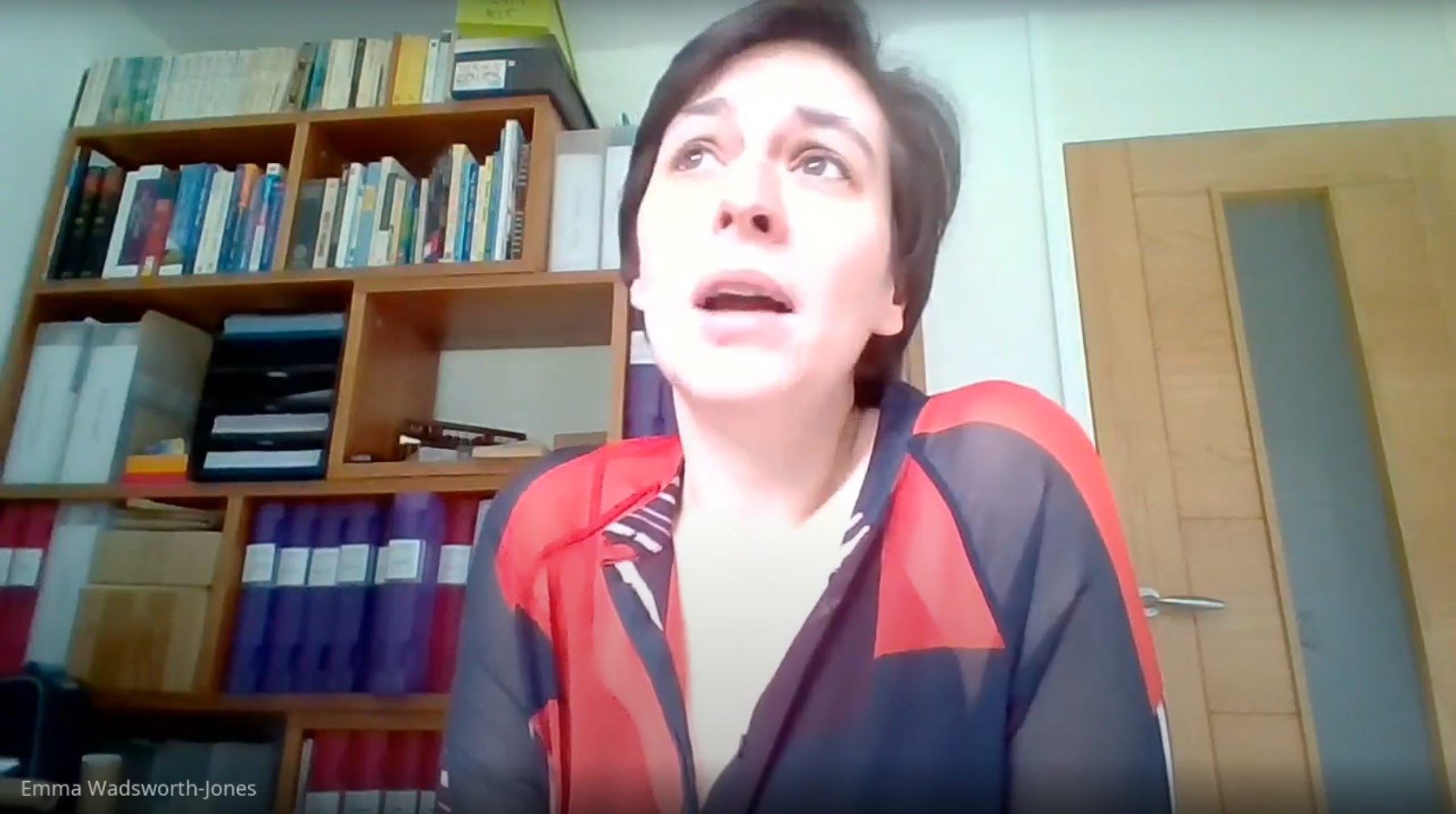 Emma Wadsworth-Jones: “The situation for humanists is worsening, we need help now”

Humanists International has always been at the frontline in the defence of humanists at risk all around the world. Since April 2020, the team can count on the support of a new member: Emma Wadsworth-Jones, the new Humanists At Risk Coordinator. In this interview, Emma shed light on what happens behind the scenes of her job, what threats humanists at risk are facing, and how the global community can help.

This interview was originally published in German by the Humanist Union, which we thank for their support to our campaign.

Marco Schrage: The 2020 #ProtectHumanistsAtRisk campaign is not the first of its kind. What can you tell us about the history of this campaign? 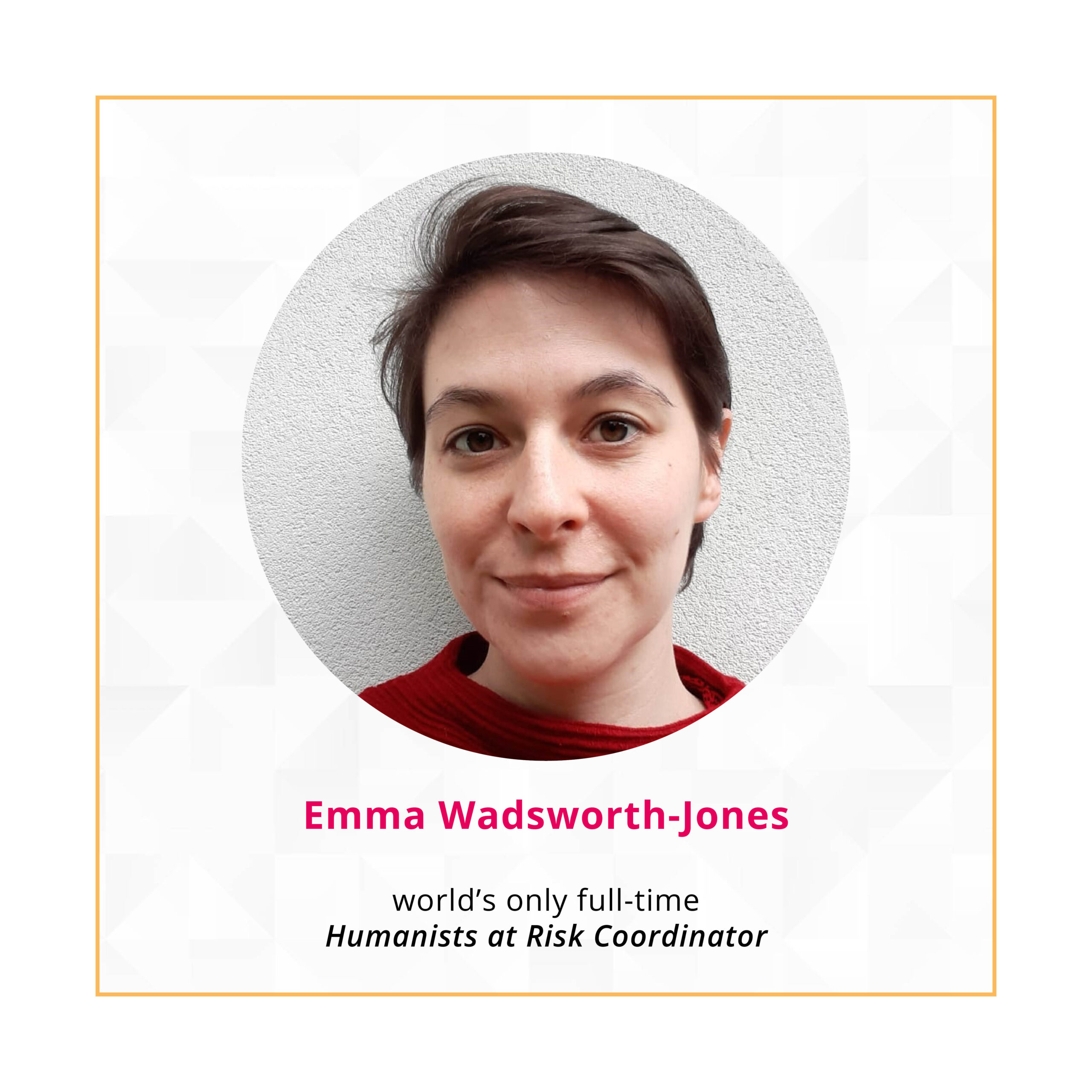 Emma Wadsworth-Jones: Well, the campaign began in 2017 and we have been running it annually since then. It began largely in response to the increasing numbers of requests we were receiving for assistance and Humanists International’s desire to be able to respond to them. The campaign is our answer to the increasing demand and we have carried it out every year since then.

What kind of help do people ask for?

That differs from case to case. They are often people who are living in very repressive societies where they do not feel that they can publicly identify themselves as humanists, atheists, or express their non-religious belief. In some cases, they fear persecution or blasphemy charges. Some individuals are being threatened or discriminated against.

Individuals write to us with a range of requests. Very often we are asked for advice or help regarding relocating, either internally within their country or abroad. Sometimes we receive requests for financial assistance because some individuals are in hiding and they cannot earn a living to support themselves, or they might need help to cover medical or legal expenses. Other times, individuals want publicity for what they are facing, like news pieces or interviews. We are also in touch with individuals that just want to know if there is a community of people that share their ideas and values out there.

How has the number of such requests for help developed in the past three years? Has it increased?

The number is subject to some fluctuations, but if we look at the development over a longer period, it has certainly been increasing, yes. We receive requests on a weekly basis and by the end of June alone, we have received 70 requests for help. 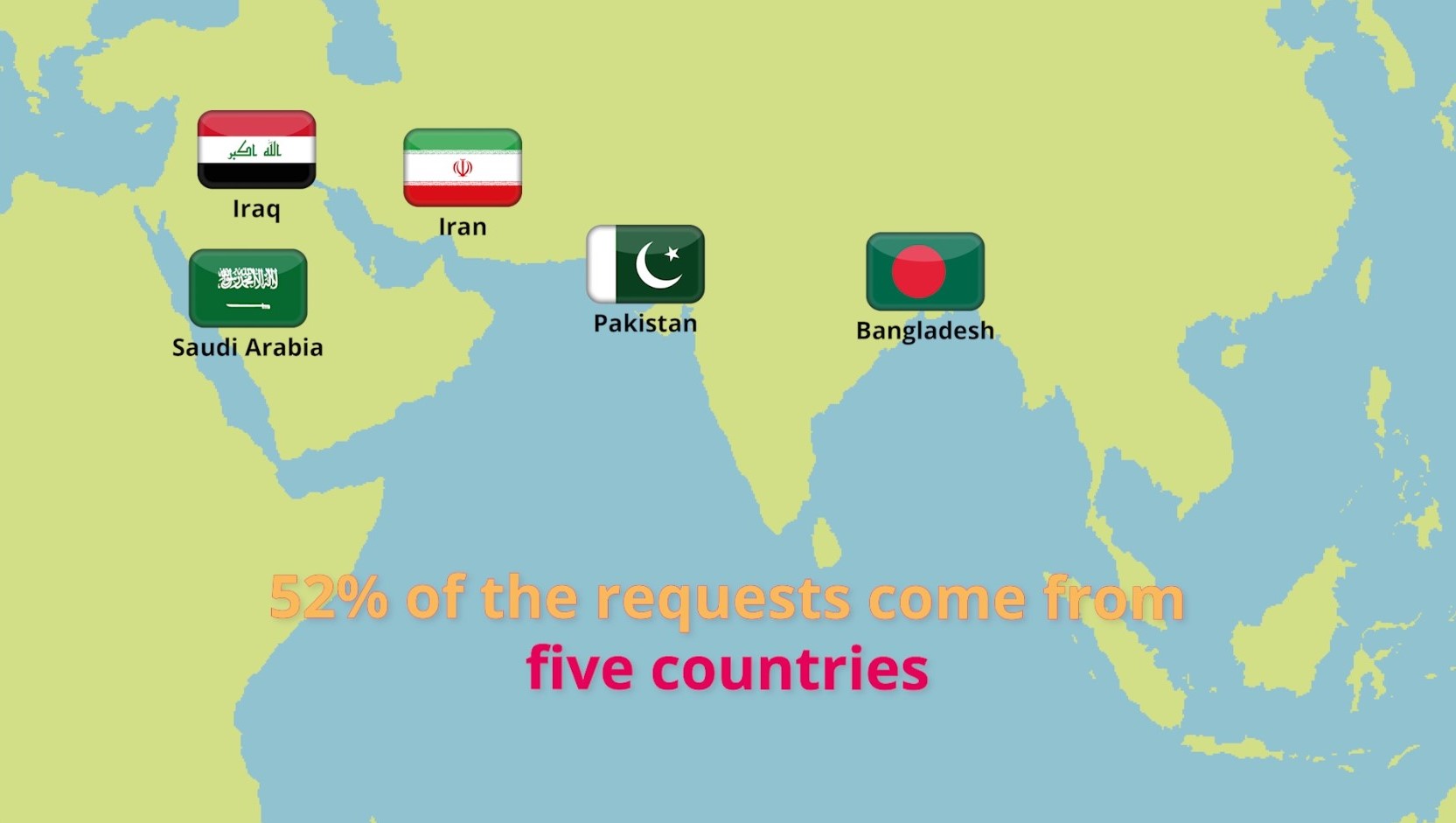 So far, why and to what extent humanists have been persecuted has hardly been researched, but it seems to me that this persecution is bound up with political suppression.

Individuals asking us for help generally come from countries that have poor human rights records. These countries persecute individuals that think differently or ask critical questions. Another reason can be religious ideology. Obviously, the reasons differ from government to government.

So, the overall trend is that there is an increasing demand for assistance from Humanists International. We have published a report on 25 June 2020, called the Humanists at Risk Action Report, that looks at the treatment of humanists in eight different countries, with the hope that it will catalyze more conversation and research, and raise awareness of the discrimination and threats humanists face. 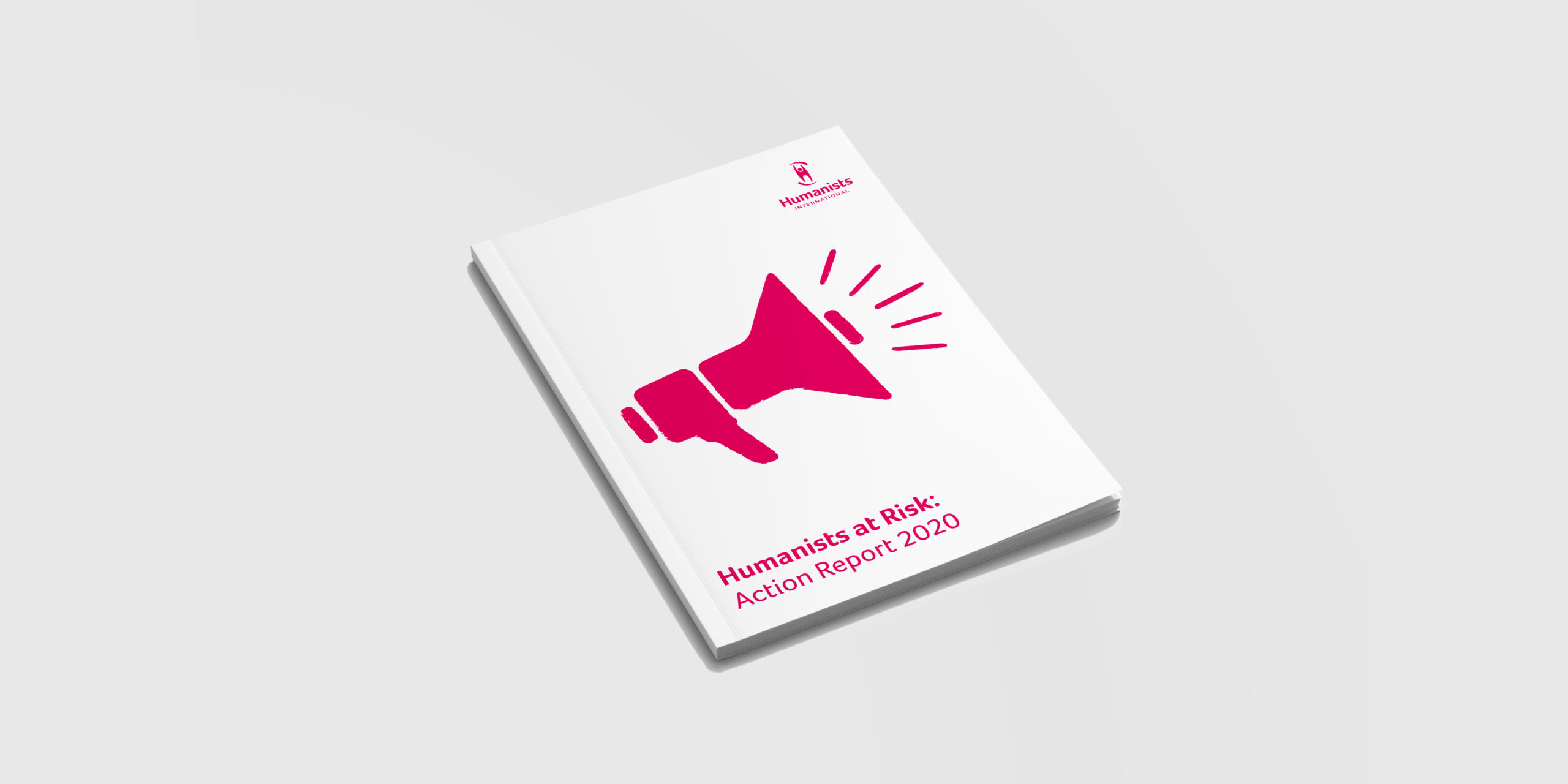 The Humanist At Risk Action Report 2020, published by Humanists International on 25 June 2020

So what does the increased number of inquiries tell us? Has the world become more dangerous for humanists in recent years or can it mean that only more people are aware of Humanists International and the help you offer?

That is very hard to say. The more an organization grows, the more inquiries you will get, of course. Simply because people know that they can come to you. My experience is that people spread the word. Whoever has received help is happy to recommend us to others.

But we are also seeing increasing intolerance around the world, and freedom of expression is being suppressed to a larger extent. And, obviously, it will be much more difficult to be open about who you are if free speech is suppressed. Overall, I do think the situation has deteriorated.

Who are these humanists at risk who come to you? Can you describe them?

In general, it is people who cannot be themselves. We receive more inquiries from men, most of them are between the ages of 20 and 50. They are usually very active on social media, or closeted and afraid. Many of the women that turn to us are being forced into marriages or forced to behave in a certain way. Largely, the trend is that these individuals are unable to be who they are freely.

The most extreme cases are, for example, the case of Mubarak Bala, the president of the Humanist Association of Nigeria. This is a case we are working on very actively at the moment. Bala is currently in detention, but we do not know where. He has no contact with the outside world, nor has he had access to his legal team. There have been a series of procedural delays and he has not even been formally charged, even though he was arrested on 28 April.

Another extreme case is from Pakistan in 2017. Mashal Khan was a student who publicly declared himself a humanist and one of his fellow students accused him of blasphemy on social media, which led to him being murdered by a mob.

We are also monitoring the situation in Iran with concern, where we have several cases who have been given long-term sentences, including blogger Soheil Arabi and author Golrokh Iraee. The same can be said for our cases in Saudi Arabia, incidentally, where several humanists and/or human rights activists are currently imprisoned, held as prisoners of conscience. They are under extreme danger because of the current Covid-19 crisis. The conditions in which they are being held will likely make them more vulnerable to infection. It is extremely dangerous to be confined with other people in overcrowded conditions, especially since there is limited access to medical assistance. We are very worried for their wellbeing.

How can you help them?

It depends very much on the individual case. In the case of Mubarak Bala, for example, we are encouraging our members to advocate on his behalf and reach out to their embassies, foreign offices, and politicians and ask them to intervene with Nigerian authorities. Because some countries give in to such international pressure. And even if international solidarity does not necessarily lead to the release of the individual concerned, it will often ensure that they are treated better in detention or prison because the government will know that the world is watching.

This is one type of campaigning, but a lot of the work we do happens behind the scenes. We can also provide small grants to individuals to cover medical or legal expenses. For instance, we did a fundraising campaign for Mubarak Bala to cover his legal expenses. We can advise on relocation and also do referrals to other organizations with which we work closely who can help individuals relocate. Humanists International also conducts advocacy at the United Nations where we raise cases and issues of concern. In short, there is a whole range of things we can do, it just depends on the individual and their wants, and what we deem to be helpful.

Would you say that your work has been successful in recent years?

Yes, definitely! My work in particular as the Humanists at Risk Coordinator is only a fragment of the wider work we do on protection. Our advocacy work involves protection, and so is the work we do with Members and Associates related to building up a solidarity network. Our Members and Associates are also doing their part by creating a community for individuals at risk. All these efforts have a massive influence on individuals around the world. We provide tangible support and we listen. Unfortunately, we cannot always do what the individuals are hoping for, but we are a point of contact in a world where they can feel alienated. We are certainly making a difference in someone’s life.

How can humanists at risk get in touch with you?

The easiest way is certainly via email. We have set up an email address, which is the best channel for initial contact. The email address is casework@humanists.international. We know that some people don’t feel comfortable communicating via email. This is perfectly fine, and there are enough other secure channels, but it is usually good to start the initial contact through email and then we can easily move on to use other secure channels like Signal, Telegram, Whatsapp and so on.

Now that the campaign officially starts: What goals have you set for yourself? Or is there something you personally want to achieve?

I joined the organization in April 2020, so first of all, I would like to get to grips with older cases, reach out to them and see if they still need support. If they do need help, I want to try to get an idea of how we can help them. Also, I would like to get to know the membership more and what they do and want to do in terms of this kind of work. Dreaming big, I wish that Mubarak Bala is freed, safe, and well and that our Iranian and Saudi Arabians detainees are freed. I doubt that we will achieve all of this immediately. But we will continue to work on it.

How can the humanist community support your efforts?

There are several ways! You can become an Individual Supporter, or you can promote and share information about our campaigns. In the coming weeks, we will share videos, infographics and interviews that will detail what humanists are facing, and it would be great if members could share those and write about it in blogs or newspaper articles. It would be wonderful if members can use the Humanists at Risk Action Report as a vehicle of conducting local advocacy. People can always reach out to us if they have any questions about how they can help. I must say that we are an approachable bunch, and that’s maybe why a lot of people decide to support our campaign every year.

Thank you Emma for your time, and good luck with your campaign!