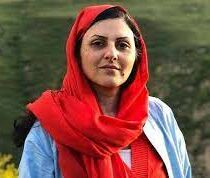 Golrokh Ebrahimi Iraee is an Iranian writer, accountant and human rights defender. In October 2016, she was sentenced to six years in prison for “insulting the sacred” and “propaganda against the state,” for an unpublished story she wrote in her private notebook, which critiqued the practice of stoning women accused of “adultery”, sanctioned under Iran’s Penal Code. She was briefly released in 2019 before being re-arrested and detained on politically motivated charges later in the year.

Branch 26 of the Tehran Revolutionary Court sentences Iraee in absentia to an additional year in prison, a ban on membership in political organizations, and a two-year travel ban on charges of “propaganda against the state.” Iraee is denied legal representation during the trial.

She remains unable to make phone calls or contact her family and has also been denied visitation with her husband, who was diagnosed with a rare form of bone cancer in 2018.

Iraee is forcibly transferred again, this time to Amol prison, which is located in north Iran. Amol is a city with one of the highest COVID-19 death rates in Iran. Her transfer followed 43 days of interrogation by the Revolutionary Guard.

Iraee is violently transferred to Ward 2A of Evin Prison, which is run by the Islamic Revolutionary Guard Corps Intelligence unit, to enable another ‘investigation’ against her to be carried out. During the transfer she is physically assaulted by prison guards, who used stun guns and dragged her by her hair from her cell.

Iraee’s family report being concerned for her health, and that all requests to visit her or talk with her on the phone have been rejected. An official supervising political prisoners reportedly told them: “The riot in Qarchak had been organized by Golrokh Iraee and whatever happens to her, she deserves it.” Intelligence agents have threatened the family and warned them against speaking to the media.

Iraee is taken back to prison. This time, she is sent to Qarchak prison, where she is denied contact with her family.

Iraee is convicted of the new charges and sentenced to an additional three years and seven months by Tehran’s Appeal Court.

The UN Working Group on Arbitrary Detention issues an opinion on Iraee’s case. It determines that her detention is arbitrary in nature, also finding that her prosecution on the basis of a private, unpublished story is a violation of her right to freedom of thought and expression. The Working Group also ruled that several aspects of the legal proceedings against her violated her right to fair trial.

New charges are brought against Iraee for “insulting the supreme leader” and “promoting propaganda against the state”. These charges are reportedly brought by the director of Evin prison, and relate to her alleged involvement in a protest against the execution of three Kurdish activists.

Iraee is released on bail for three months.

Iraee is transferred to hospital in a critical condition after experiencing severe nausea, vomiting and gallbladder issues

Iraee and Daeimi are beaten by riot guards following a disturbance in Qarchak prison.

Iraee is illegally transferred to Qarchak prison. Iraee goes on hunger strike for 81 days to protest the illegal transfer, and the conditions in which she is being held.

In an open letter, Iraee and fellow detainee Atena Daemi described the conditions in Evin prison following a private tour of the prison that was given to 40 foreign ambassadors. They wrote: “Have they told you that, owing to excuses based in religious law, male doctors don’t perform medical exams, injections, or electrocardiograms on women prisoners? Did they say that there’s not a single woman nurse in the whole prison to do these things for us? Do you know that hundreds, perhaps thousands of prisoners here suffer from kidney disease from drinking the prison’s unhealthy water? […]”

Iraee is charged with “insulting the sacred” and “propaganda against the state,” Both her story and Facebook posts, in which she spoke about political prisoners from the 1980s and in which she was critical of the Islamic Republic’s founder, are used as evidence in her conviction. Iraee is tried in two brief sessions by the Revolutionary Court in Tehran – a secretive court set up to try critics of the regime with vague ideological offences. The trial is marred by procedural violations.

She has no legal representation at the trial. The first lawyer she appointed was put under pressure to withdraw from the case, and the second was barred from representing her. She is convicted in absentia and sentenced to one year of imprisonment for the charge of spreading propaganda (Islamic Penal Code, art. 500), based on the social media posts. She was sentenced to an additional five years’ imprisonment for the charge of insulting the sanctity of Islam (art. 513), based on the unpublished short story.

Iraee’s husband is sentenced to 15 years in prison, for “insulting the Founder of the Islamic Republic Ayatollah Khomeini” in his social media posts. Because of a previously suspended 4 year sentence, his total sentence amounts to 19 years.

Iraee and her husband, Arash Sadeghi, are arrested by Iran’s Revolutionary Guard. Their house is searched without a warrant. During this raid, the authorities confiscated Iraee’s notebook, which contained a handwritten, fictional story where a female character watches The Stoning of Soraya M, a Persian film depicting the true story of a woman stoned to death for adultery, and in reaction burns the Koran. The authorities detained and interrogated Iraee, pressuring her to confess by blindfolding her and threatening her with execution.

Golrokh Ebrahimi Iraee is the wife of the Iranian political activist Arash Sadeghi. Sadeghi has been arrested and jailed on numerous occasions in the past, and the government has a history of threatening and harassing Sadeghi’s family and friends. Iraee is an accountant by profession.

Humanists International calls on the Iranian government to release Golrokh Ebrahimi Iraee, and to end its campaign of judicial harassment against her.

While she remains in detention, Humanists International calls on the Iranian government to respect Iraee’s basic human rights and dignity, by guaranteeing her safety and well-being, access to medical treatment, and her right to receive visits and communicate with her family members.

Humanists International has worked on Iraee’s case since 2018.

In addition to behind-the-scenes advocacy with diplomats and officials, Humanists International raised Iraee’s case at the UN Human Rights Council in 2021, during an interactive dialogue with the with the Special Rapporteur on the situation of human rights in the Islamic Republic of Iran, Mr. Javaid Rehman.