One Law for All – anti-racist march and rally report

Maryam Namazie writes: Nearly 600 people joined the One Law for All anti-racist rally against Sharia and religious-based laws in Britain and elsewhere and in defence of citizenship and universal rights in Trafalgar Square and marched towards Red Lion Square in London. Hundreds then joined our public meeting to discuss and debate Sharia, Sexual Apartheid and Women’s Rights. Our protest was met with widespread support and left many feeling inspired and invigorated. It was also covered by the mainstream media, including BBC Radio 4, BBC 5Live, BBC Wales, and the Times. 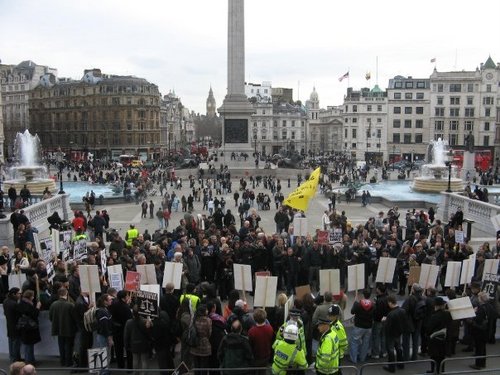 The rally of several hundred heard a number of speakers denouncing the policy of accommodation and appeasement of the political Islamic movement. A C Grayling in his speech said: ‘Once you start fragmenting society, once you start allowing different groups in society to apply different standards, you get very profound injustices and it is almost always women who suffer these injustices. We have to fight hard to keep one law for everybody.’

Parisa who was refused a divorce from a violent husband said: ‘Ten years of my life is gone because of Sharia law. I want to stop it. Please help to stop it. It is not fair. I had a good uncle who helped me to escape but what about others who don’t have a chance to run away. I saw that many, many times.’

Terry Sanderson, the president of the National Secular Society, said: ‘We do not need another legal system running in parallel… Sharia is creeping into our legal system and society and we must stop it in its tracks and now!’

Fariborz Pooya, head of the Iranian Secular Society, said ‘the introduction of Sharia is a betrayal of thousands of women and children and leaves them at the mercy of Islamist groups.’

March 7 was One Law for All’s first warning to the British government and the political Islamic movement. As Maryam Namazie said on the day: “We won’t stand idly by whilst the British government relegates a huge segment of our society to sham courts and regressive rules and appeases the Islamists here or elsewhere. And we will bring the political Islamic movement to its knees in Britain in much the same way that people are doing in Iran and elsewhere.” She added: “We will keep growing in numbers and strength until we get rid of Sharia councils and religious tribunal’s altogether.”

To see footage and photos of the rally, march and public meeting, click here:
http://www.onelawforall.org.uk/eventPages/March7-2009.html