The humanist approach to life can be worked out by human beings anywhere and at any time. It does not rely on any sacred text or special teachers. So it’s no surprise that we find humanists across our planet and throughout history as far back as we have the written records of the thoughts of human beings. 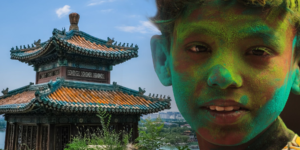 China and India are home to the earliest written humanist ideas.

The earliest written humanist ideas come from China and India.

In India the philosophers of the Charvaka or Lokayata school were first heard of just over 2,600 years ago. Just like modern scientists, they saw the universe as a natural phenomenon and they saw human beings as part of nature:

There is no heaven, no final liberation, no soul, no other world… How can this body, once dust or ashes, return?

Their original texts did not survive but we know they were enormously influential – some scholars of Indian philosophy believe their ideas may even have been the very general ‘common sense’ of Indians of the day. The twentieth-century Indian humanist M N Roy summed up the Charvaka philosophy in his own work:

Morality is natural, it is a social convention and convenience, not a divine command. There is no need to control instincts and emotions; they are commands of nature. The purpose of life is to live; and the only wisdom is happiness.

In China, human life and human morality have rarely been seen as tied to any supernatural or divine principle, but the most humanist tradition of thought is probably the Confucian tradition, which began with Confucius himself 2,500 years ago. One of his successors, Mencius (372-289 BCE), was born about 2,400 years ago and is particularly striking for expressing the humanist idea not just that morality was a purely human matter in practice but that it had a basis in our biology. He thought that human beings had it in them naturally to be good, and just needed the right environment to draw that out of us:

All human beings have a constitution which suffers when it sees the suffering of others… If people catch sight suddenly of a child about to fall into a well, they will all experience a feeling of alarm and distress… Because we all have these feelings in ourselves, let us develop them, and the result will be like the blaze that is kindled from a small flame, or the spring in full spate that starts with a trickle. Let these feelings have a free rein, and they will be enough to give shelter and love to us all. 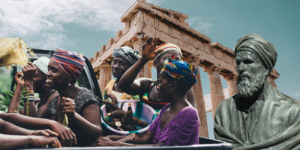 In other parts of the world, they also have their fair share of introducing humanism.

In Europe, the people of the Mediterranean world 2,600 years ago in Greece and the Middle East developed a very widespread humanist culture that, alongside polytheistic religion, Judaism, and Zoroastrianism, dominated Mediterranean life for almost a thousand years until the coming of Christianity.

In the Arab world around 800 years ago, scientists and thinkers promoted a great many humanist ideas.

In Africa, there are fewer written sources of humanist thinking but the concept of Ubuntu has provided an entirely secular framework for compassion, reciprocity, dignity, harmony, and humanity for the purpose of building and sustaining community with justice and mutual concern. Nelson Mandela expressed it perfectly: ‘I am who I am because you are who you are’.

All of these different sources of humanist ideas have come together in our modern and interconnected world to shape our contemporary understanding of the humanist approach. We see that a reliance on reason and evidence to explain the universe, a commitment to actively giving meaning and significance to this one human life, and a deep belief in the equal dignity of every human being are all ideas with a long and global heritage.

Today, there are humanist organizations across the world promoting these humanist ideas. They don’t belong to any tribe, nation, or race but are a true human tradition.