IHEU’s 2009 General Assembly of Member Organisations was held in London on 5th and 6th of June as part of a week of events, including a Conference to mark Darwin’s anniversary year and a Global conference on Untouchability. [reports will follow soon]

The important news of the GA was that the proposed new IHEU Bylaws and Internal Rules were passed unanimously. This is a landmark for IHEU as one of the goals of making these changes is to give national Member Organisations from developing countries more influence at the General Assembly. Under the new Rules, established national, democratic, membership organisations will be able to be Full Members of IHEU with voting rights at the GA, along with national and international umbrella organisations for such membership organisations. 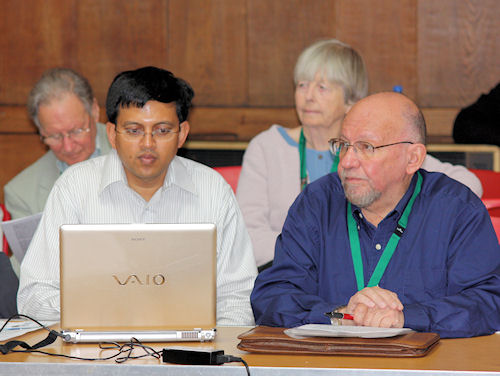 New definitions of all membership categories are laid out in the new Rules, together with membership benefits and obligations, their dues calculation and representation at the GA. The EC’s responsibitities, powers and duty of care are made clearer and in future years, the GA will elect 6 members of the EC who will then appoint the officer positions, of President, First Vice-President and Treasurer from among the members of the Committee.

Over the next months, IHEU will be contacting all Member Organisations to seek information from them so that their membership category can be established as well as the level of their dues. Under the transitional arrangements, also agreed at the GA, the new Bylaws and Internal Rules came into effect immediately and the new membership categories and dues will take effect from 1 January 2010. 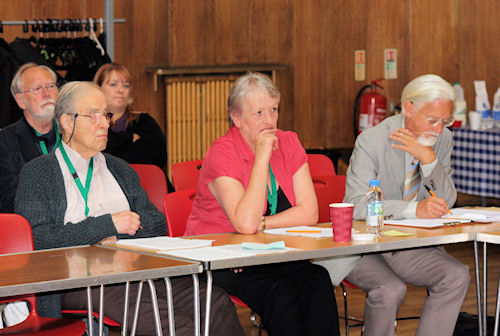 In addition, the GA received the annual address of the President, Sonja Eggerickx [see below], and IHEU’s activity reports. The GA welcomed the news that IHEU had recently received a legacy of $2.5 million. Under the terms of the donor’s will, this money must be kept in an Endowment Fund, but the income from this money, will help make IHEU more effective.

Present at the GA were all the Heads of IHEU’s International Delegations to the UN, UNESCO, Human Rights Council, Council of Europe and the Africa Commission on Human and Peoples’ Rights and the GA were able to question them on their important work for International Humanism. The strategic plan for 2009-2013 was approved, as was the annual report and financial statements for 2008. There were long and detailed discussions on 3 policy resolutions that had been submitted on: Religion in Schools; Values of Freedom and Democracy; and Astrology and paranormal in media. Following discussions, further work will be done on all these resolutions.

A session on communications and fundraising was led by Matt Cherry, and the newly formed Membership Growth and Development Network told the GA of their plans. Sonja Eggerickx was re-elected as President and Roar Johnsen as Vice President.

In closing the meeting, President Sonja expressed IHEU’s thanks to South Place Ethical Society for the use of Conway Hall for the week’s events and to the British Humanist Association for hosting the events so well.

Imagine you are President of an international organisation asking for funds all the time, and not always very successful in getting them. Imagine there is a world wide economic crisis and you are still President of that international organisation. Then imagine that something very unusual happens: there is a legacy of 2,5 million US $. Well that is exactly what happened, and I quote from last year’s address:

“A few month ago, you all got the message that IHEU got a legacy of a lot of $, and we were congratulated for it. Well, I must say that although something is on its way, we haven’t yet got a single dollar, not even a single cent, out of that legacy. I do promise solemnly that as soon as we got through all the legal processes, as soon as it is on our account, you will be the first to know. It must be clear that we want to share good news with you.”

And so, when we eventually received the money a couple of weeks ago we mailed you. This doesn’t mean that all our problems are over. The money has to go into an endowment fund, and we can only use the income from it. But at least this legacy has the potential to make IHEU more effective.

This year is of course Darwin’s anniversary year. And all over the world our M.O.’s took the lead in commemorating it and promoting science. It is a vital moment in our struggle against superstition, in our never ending efforts to make the scientific approach the natural way of thinking about our world and our universe. We witnessed yesterday at the Darwin conference, organised by the British Humanist Association, how we can explain evolution even to small children.

Our ideal of separation of religion and state is not at all fullfilled! Just because President Obama mentioned non-believers in his inauguration speech, it does not mean that atheists are fully accepted in the US or that god has disappeared in public life. Just because France has that very good law of 1905, does not mean that secularism is a fact in France. Last Wednesday there was a memorial service for the victims of the missing Air France plane, in the presence of the President and his wife. It was in the cathedral although I guess not all the victims were catholics.

And ask our delegates in international bodies: human rights are not evident; the Human Rights Council in Geneva is still in hands of nations not known for their great sense of democracy nor respect for human rights. But our delegates don’t give up and I want to thank them for it as I did last year and the year before. We decided to attend the Durban II conference in order not to give a free run to those whose actions are exactly the opposite of our ideals in human rights. And it is good that at least someone keeps their finger in the pie and continues to make clear what those ideals should be.

Our campaigns in India and Africa continue. Of course we welcome the Conference on Untouchability later this week. And we hope that our project “Adopt a Dalit village” will be successful, with many of our MO’s supporting a Dalit village in India. Africa is a difficult part of the world for humanism but both Leo Igwe and Deo Ssekitooleko are working hard in their respective areas. The schools project in Uganda is doing well, thanks also to regional humanist groups in the UK, but there is more work to be done in building their organisation and infrstructure. The challenge for us is to help them.

In many parts of the world we don’t have member organisations. The Membership Growth and Development Committee wants to change that and will need to discuss development possibilities and how it is best to help set up new organisations. We want to accentuate the growing part of our international movement, and thus try to make humanism known worldwide.

Communication is vital and we worked hard on it last year. But this brings me to another difficulty: the relationship between IHEU and you – our M.Os. There is internet, there is e-mail, but it seems impossible to appoint an international contact person for each of our M.O.s who would be responsible for a 2 way contact with IHEU. I wrote to all M.O.s asking you all to appoint one, but few have done so. If we had such a person in each organisation, we could give you more news about actions, statements etc from humanist all over the world – and the members in all the MOs would also get more information about international Humanist issues.

Of course language can be a difficulty but it must be possible to find solutions in your organisations for that problem. And of course it would be great if our website could be in more than one language, so if you know volunteers to translate, send them to our webmaster! We have the International Humanist News, 4 issues in English are published yearly and one in French. It would be good if more M.O.s would cooperate on it. And very recently there was a webinar, organised by Matt. I heard that it was a success and participants were enthusiast. This could be a future way of building a network. So there is hope of course.

There are some items where we face a real challenge. I think that the situation of girls and women should be much more of a priority for us. Where human rights are violated, the situation for women is always worse. At last there could be some improvement if the new “super-agency for women” will be accepted by the UN General Assembly. That would give us, it would give all women, more legal power to fight for their rights. It is a huge responsibility for humanists to implement into everyday life what we say about the equality of all human beings.

While finishing this address I hear on the radio that for the first time India will have a woman, -Ms Meira Kumar-, as chair of the parliament. She is member of a lower cast. That is good news in a way and I do fiercely hope that the situation of women and lower cast Indians will finally improve, although I am well aware that her presence alone is not enough to change the way of life in India.

Dear friends, we might have been persuaded that the Age of Enlightment reached its aims but more and more the ideals of that period are being attacked. In name of tolerance we accept lots of violations of human rights. It is important to realise that not only freedom of speech is under attack, but also the right on education, the right to live a decent life, the right to access good healthcare, the right to housing, the right to be able work. It is important not to forget these rights, it is not this or that but this and that. Freedom to die from starvation is not freedom of course. When freedom of education is seen as just learning the content of an old book, presented as holy, it cannot be considered as freedom.

Tolerance and respect are vital. But this doesn’t mean that we have to accept everything. Of course we live in a world where different religions, cultures, come together. We have to look for a way to live together. But this may not lead to a society where particular rules are prevalent on laws. And again: it is time to be proud of being humanist, atheist.

And I am glad to say that humanist youngsters do what they can. But we have to help IHEYO as much as we can – for they are the future. It is simply a must to work together with them without patronising them. To find a way to offer them our experience without telling them how they have to do what, is a difficult exercise – but necessary.

I would like to end this speech with the very simple words of the BHA bus: “there is probably no god. Now stop worrying and enjoy your life”. For this audience we can drop the probably of course.