The UN Human Rights Council has published IHEU’s written statement on witchcraft in Africa. The statement documents the abuse of children and others through accusations of witchcraft and supposed witch “cures”. IHEU calls for improved education and policing to eliminate these twin scourges. 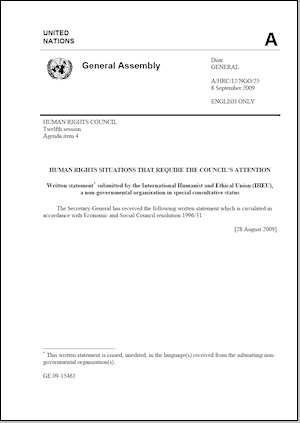 The Secretary-General has received the following written statement which is circulated in accordance with Economic and Social Council resolution 1996/31.

Witchcraft and witch-hunting in Africa

1. The age-old belief in the power of witchcraft is still widely held throughout Africa. Witchcraft is still practiced by witchdoctors whose actions are causing great suffering to innocent people, often killed for their body parts that are believed to hold magical powers for use in spells.

2. Many Christian groups have campaigned against witchcraft as being morally abhorrent, whilst themselves believing that the power of witches is real.

3. Unfortunately, some unscrupulous pastors motivated by personal gain and often involved in Pentecostal Churches, have harnessed the fear of witchcraft for their own ends, initiating a reign of terror against some of the most vulnerable members of society whom they falsely accuse of being witches. The victims suffer appalling abuse, reminiscent of the European witch hunts of the sixteenth and seventeenth centuries, many being burned alive.

Two problems with a single cause

4. Belief in the power of witchcraft is thus leading to human rights abuse in two distinct ways. First, the abuse of those targeted for their body parts for use by witch-doctors, and secondly the hounding of those accused of being witches. Recent reports of witch hunting and kidnappings by militias in the Gambia under the orders of President Yahya Jammeh have highlighted the extent of this latter problem.

5. It is not uncommon for gangs of uneducated young men to be employed by witch- doctors to carry out the attacks on people to gather their body parts. An estimated 300 people are killed each year in South Africa alone as a result of having their body parts removed. Childrens’ body parts are the most prized as they are believed to be more effective in the preparation of spells and potions. The victims are often tortured prior to being killed as it is believed that this adds to the power of the subsequent spell. The body parts are then removed whilst the victim is still alive.

6. In Tanzania, Albinos are targeted for their body parts used in expensive potions believed to be particularly effective in bringing good luck. A similar situation exists in the Democratic Republic of Congo, Zimbabwe, Mozambique, Burundi, Kenya, Uganda, Zambia and other countries in sub-Saharan Africa.

7. It has been a tradition in Ghana, Zambia and Kenya to accuse old women, especially those who are childless, of witchcraft. In recent times up to one-third of those accused have been elderly men. It is suspected that one of the main reasons for this is economic. If a person is driven from their village, then the family no longer has to financially support them.

Profiteering from belief in witchcraft

8. The response of some of the Pentecostal Churches in Africa to these atrocities has resulted in an equal abuse of human rights. Preaching to people living in rural communities who have often only received a basic education, unscrupulous pastors are making fortunes. Helen Ukpabio, the leader of Liberty Foundation Gospel Ministries in Nigeria is one such. Her film entitled ‘End of the Wicked’ brands children as witches, and in her book ‘Unveiling the Mysteries of Witchcraft’ she states that a child under the age of two that cries at night and has poor health is ‘an agent of Satan’. As most parents have children who at times cry at night and sometimes are ill, this would include most, if not all, children. She therefore has an endless supply of parents who can easily be convinced that their children are witches. These parents are then forced to pay to have their children ‘cured’.

9. Films portraying witchcraft that reinforce this message are readily available for purchase at Nigerian markets. Young children have been driven from their homes and left to fend for themselves on the streets. There they quickly fall prey to people traffickers, criminal gangs or into forced labour. Some children have been beaten, poisoned, buried alive, attacked with acid and even tortured in churches in order to extract ‘confessions’.

10. Leaders of many Pentecostal churches are charging parents money to have their children
‘exorcised’. Often, when desperate parents have paid the pastors they are told that the Devil may return and they have to pay again. A certain “Bishop” Sunday Ulup-Aya, based in the Akwa Ibom region of Nigeria has made a fortune from this practice. His methods included pouring a mixture of alcohol and his own blood into the eyes of children that he accuses of being witches, whilst charging their parents £170, this in a country where millions of people have to live on less than £1 a day. He would then hold the child captive until the parents paid his bill. These abuses were highlighted in the documentary ‘Saving Africa’s Witch Children’ which won both the BAFTA and Amnesty Film Awards. After the film was shown on British TV, Sunday Ulup-Aya was arrested and charged with murder.

11. Special villages have been set up, for example in South Africa, where those accused of witchcraft may shelter, although often those who go there to escape persecution are in fact imprisoning themselves to save their lives. When they arrive at these camps, the suspected witches are subject to ‘exorcisms’ before they are allowed to stay. There are a number of these
‘witch camps’ in various African countries including six in Ghana where more than 400 women have found refuge.

12. In Akwa Ibom state in Nigeria, Mr. Samuel Itauma and his wife Elizabeth run a shelter for children who have been accused of witchcraft. The Child Rights and Rehabilitation Network (CRARN) cares for over 200 children who have been rejected by their families, having been accused of witchcraft. These children, some as young as three months old, bear the physical and mental scars of abuse. However, on 3 July 2009 that refuge was attacked by people believed to be police officers from Lagos. Under the pretext of claiming to be donors wishing to bring gifts to the children, they entered the shelter and attacked the inmates. The children were beaten and wounded and Elizabeth Itauma and an assistant were held overnight in police custody. Gary Foxcroft of the UK charity Stepping Stones Nigeria has said that this attack was part of a wider campaign of intimidation against CRARN and their supporters. Following this attack and an international outcry, on 9 July, 2009, Governor Godswill Akpabio made a surprise visit to CRARN and promised the children protection. He also announced the setting up of an educational scholarship scheme for the children.

13. Just 20 days after Governor Godswill Akpabio’s visit to CRARN, on 29 July 2009, Leo Igwe, Executive Secretary of the Nigerian Humanist Movement and IHEU representative for West Africa, was attacked and beaten when an angry mob of Helen Ukpabio’s supporters disrupted a Conference in Calabar organised together with Stepping Stones Nigeria. The conference was, as Leo Igwe stated, ”a peaceful meeting for people to openly debate what could be done to prevent the abuse of child rights linked to the belief in witchcraft … This attack by Helen Ukpabio’s supporters once again highlights the depravity of this so-called ‘woman of God’. Such false prophets should be immediately arrested and prosecuted under the Child Rights Act.”

14. The arrest of ‘Bishop’ Sunday Ulup-Aya and the visit of Governor Godswill Akpabio to CRARN came after the international community had made its feelings clear regarding the abuse of children accused of witchcraft. Such pressure has been shown to be effective. There is still much work to be done to protect those who suffer as a result of the belief in witchcraft.

15. The Child Rights Act in Nigeria was enacted in 2008 and did indeed criminalise the practice of accusing children of witchcraft, imposing stiff penalties for offenders. Some have been prosecuted and imprisoned, but the abuse of children continues despite Nigeria having ratified the UN Convention on the Rights of the Child.

17. Persons such as Helen Ukpabio, who have such a strong and perverse influence over their congregations, and who are responsible for so much misery, must be dealt with effectively under the law. The right to freedom of religion and belief doers not include the right to abuse the human rights of others. The international community owes it to the victims of body-part snatchers, the vulnerable elderly and the grossly abused children of Nigeria to ensure that this is understood and acted upon.

18. We call upon the Human Rights Council, the African Union and the African Commission for Human and Peoples’ Rights, to urge governments to do more through improved education and policing to eliminate the twin scourges of those practising witchcraft and those claiming to find and “cure” witches.