The Vatican has announced that Pope Benedict XVI is resigning with effect from 28th February.

During his papacy, Joseph Ratzinger has presided over – and been implicated in – a worldwide sexual abuse scandal, involving the clerical abuse of children over many decades, and various attempts to deter legal process and protect church figures which have widely been described as elements of a Vatican-led "cover up". His handling of the crisis has generally not been well-received and professed adherence has plummeted in some predominantly Catholic countries, notably Ireland.

A new Pope will be elected in due course in a secretive "Conclave".

Sonja Eggerickx, president of the International Humanist and Ethical Union (IHEU) commented, "This Pope has been widely regarded as a conservative leader. His comments on atheism and secularism have frustrated many humanists, seeming as they do to contain a willful misunderstanding of individuals who find meaning and value outside of religion. He further entrenched the Vatican on issues such as illiberal restrictions on contraception and abortion, the secondary status of women's rights, and homosexuality, which he described as 'intrinsically disordered'. He described same-sex marriage equality as a threat to peace and justice on multiple occasions. 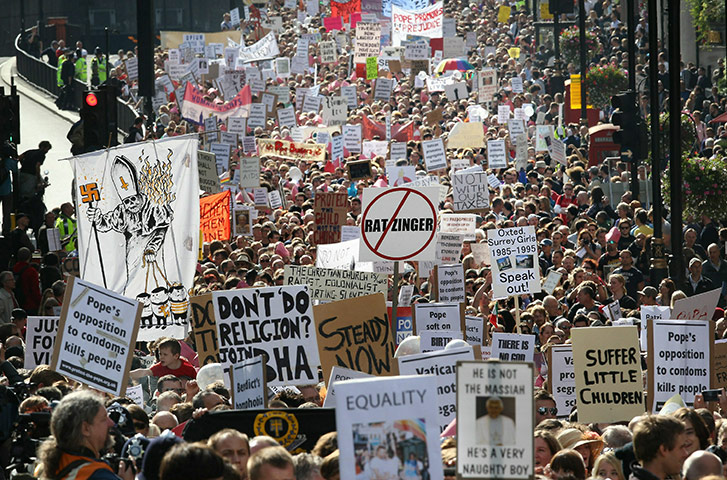 In September 2010, the "Protest the Pope" campaign in the UK, organised by various groups including IHEU member organisations, was the largest ever street demonstration against a state visit by the Pope

"The Vatican wields great influence especially on predominantly Catholic countries. By lending credence to states which outlaw homosexuality, and causing untold harm by agitating against the use of condoms (one of the primary methods for preventing HIV transmission), for example, this influence is often destructive. To me the Vatican appears too often to place ideology above human lives and freedoms.

"We note that a great many people around the world who define themselves as Catholic nevertheless reject much of the authoritarian 'moral' dogma from the Vatican. As a humanist I have no part in the church, and the internal workings of the church are no business of mine. However, the influence and behaviour of the Vatican impacts on millions of lives. And even as a humanist I can hope – though it may be a vain hope – that the next Pope might better reflect the diversity of opinion within the Catholic laity, let alone the wider world in the twenty-first century."