IHEU urges calm and safeguarding of Alber Saber while on bail

Young Egyptian Facebook user, Alber Saber, has today been sentenced to three years for "offending" religion. He should be out on bail by tomorrow, pending an appeal of his case.

Saber features on the cover image of Freedom of Thought 2012, a report by International Humanist and Ethical Union (IHEU) on global discrimination against nonreligious people, published Monday. 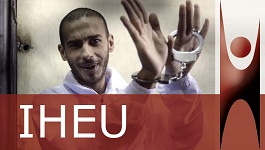 He was accused by neighbours earlier this year, of administrating an atheist Facebook page and for linking the "Innocence of Muslims" Youtube video. After a mob surrounded his house, his mother called police. Instead of dispersing the crowd the police arrested Saber himself. He was eventually charged over videos in which he himself discussed his religious skepticism.
During his initial detention police were accused of leaving Saber in a crowded cell, telling fellow inmates he was charged with apostasy, resulting in physical attacks on Saber.
"Of course, we are appalled that merely for expressing disbelief in Islam, a young man should face not only the ludicrous ordeal of court proceedings, but that he may be incarcerated for three years," said Sonja Eggerickx, president of IHEU. "We hope that the state authorities are better able to understand their duty of protection to Saber while he is out on bail and, if the sentence cannot be overturned, during any time that is served. We urge calm and understanding from religious clerics and the public, and remind the Egyptian authorities of their duty to safeguard vulnerable citizens."
Eggericks continued, "We cannot stress enough that this prosecution and sentencing stands against international human rights treaties. Egyptian law has found Saber guilty, not of hate speech of inciting hatred, not of malicious comment against any individual, but simply because his beliefs do not conform to the majority religion. Article 98 of Egypt's penal code does not target malicious or harmful acts, it criminalises someone like Alber Saber merely for causing supposed offence to abstract concepts."