Taking advantage of a legal loophole, the marriage papers of Nidal Darwish and Kholoud Succariyeh were approved by the Lebanese Ministry of Justice last month. They became the first, and so far only, couple to receive a secular, civil marriage in the Middle East. Lebanon's Sunni grand mufti responded by decalring all who support civil marriage are "apostates" — Frida Skatvik writes 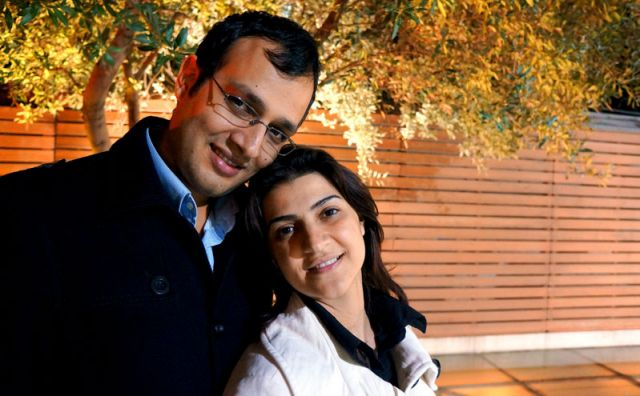 "I, and many others beside me, want to live in a secular state, in a country with secular civil rights," said Kholoud Darwish. Her husband Nidal Darwish agrees. (Photo: Frida Skatvik)

Kholoud empties her purse on the living room floor, find the phone and dials her partner, who is at the gym.

"They have approved it! We're married!"

Finally, Holoud and Nidal can breathe a sigh of relief. Marriage Papers, which were signed in secrecy last November, are formally approved by the Ministry of Justice. For several months have been waiting for confirmation of what they have been convinced of for some time: there are no Lebanese laws that prohibit couples to marry outside of religious institutions, on Lebanese soil.

In Dahi, a Shiite neighborhood in the outskirts of Beirut, the rumors have been swirling for a long time. Has your daughter lost faith? Why will not she marry a Muslim?

"For us it is not a matter of faith," explained Kholoud when we meet in the backyard of a training center in Hamra, where Nidal works as a receptionist.

"I'm still Muslim, but my faith is not related to my status as a citizen. I, and many with me, want to live in a secular state, in a country with a secular civil rights," says Kholoud. "Our marriage is not just about us anymore. It has become a social responsibility for us."

Nidal, who unlike his wife has not studied English, is content to nod affirmatively to all Kholoud says, but elsewhere the groom is quoted as saying, "It is really a different feeling when you feel like a human being getting married to another human being based on human rights and not on sectarian rights". 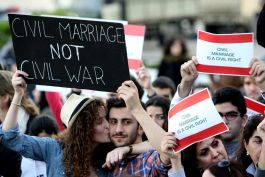 Nidal and Kholoud is not alone in wanting a secular state. Since their marriage became known, it has been established support groups on Facebook, demonstrators have gathered around Martyr's Square in Beirut to show their support for the issue, and even Lebanon's president, Michel Suleiman, announced via Facebook and Twitter that he supports the movement for civil marriage.

"We should as soon as possible prepare a law on civil marriage," wrote Suleiman on Facebook, where he posted a picture of a father with his daughter on his shoulders in a demonstration. In one hand the girl holds a teddy bear in the other she holds a placard that read, "civil marriage – not civil war."

"Such a law would undercut religious divides and strengthen national unity. What do you think?" the president asked his 174,000 followers.

Already 700 Lebanese couples travel to Cyprus every year to sign the marriage papers outside Lebanon's religious institutions. Some make their way across the sea for economic reasons, some for secular marriage, others just for religious reasons.

How to use the civil marriage loophole in Lebanon

Marriage outside of Lebanon's 18 recognized religions, unless the bride first converts to the groom's religion, is prohibited. Kholoud, who is from a Sunni background, would have had to convert to Shia Islam – Nidal’s religion – if they were to be married the traditional way.

"First we planned to travel to Cyprus," said Kholoud, who was not interested in undergoing a religious conversion. "Although we would prefer to do it at home with the family present. It was by chance that we got to talk to a lawyer who believed that civil marriage was lawful in Lebanon."

There was only one problem: no one had done it before. Also, the Lebanese family law, which has not been changed since 1936, when Lebanon was under French mandate, relied on a reinterpretation.

"We spent ten months to hold secret meetings, study law and get legal assistance before the marriage contract was signed."

To use the legal loophole, before the papers could be signed the couple had to "free themselves" from their religious sects in part by replacing their old ID cards with new, where religious affiliation was not listed. (Before 2009, citizens were required to include religion in official  identity papers, which most still have.) Nidal and Kholoud then kept the ceremony secret, with only their close family, notary and two witnesses present. They then applied to have the marriage recognized. Two months passed without either confirmation or denial from the Department of Justice. Then the couple decided to go to the press. First, a no, then a final yes: Nidal and Kholoud were the first couple who had married civilly in Lebanon.

The precedent would mean that Lebanon is now the only country in the Middle East that accepts civil marriages.

Nevertheless, there are many and different opinions about whether Nidal and Kholouds marriage is actually is valid or not. An updated family law does not seem to be within reach. Even though the President has given his wholehearted support to the couple's claim, his executive power, after the peace agreement of 1989, is limited. Instead, the power of decision lies largely by the prime minister – a Sunni businessman and an outspoken opponent of secularism. In addition, all religious authorities, Christians as Muslims, unanimously oppose the proposal to secede family law from religious customs. Perhaps not surprisingly, since marriage is very profitable among the clergy: Just hire of a local church will cost a couple of at least £1200 – in addition to other expenses.

The strongest critic of civil marriage is Lebanon's Sunni grand mufti, the influential Sheikh Mohammed Rashid Qabbani, who has declared "war" against the secularization movement. On the official website of the fatwa, Dar al-Fatwa, Qabbani has condemned all Muslim politicians who approve the bill, which he describes as a "bacteria" in Lebanese society.

"Any Muslim with legal or executive authority in Lebanon who support legalizing civil marriage is an apostate and outside the religion of Islam," declares Qabbani and cautioned that, "such officials will not be washed or shrouded, will get no last prayer and will not be buried in a Muslim cemetery."

At the fitness center in Hamra Kholoud sits and waits for Nidal to finish the job. Although her own workday is long over, she feels it's safer that way: to head home together.

"There is a reason that there are more Lebanese living abroad than the Lebanese in Lebanon," sighs Kholoud.

"But here we are and we try to make a difference."

Now it only remains to be seen if others have the courage to do the same.

Translated from an article by Frida Skatvik originally published in Norwegian at Fritanke.no.