Iran admits torture following pressure from IHEU at the UN

Horrific details of torture committed by state authorities against Iranian citizens have prompted renewed calls for Iran to implement "urgent and fundamental" measures to abolish the practice.

Following pressure from our delegation, Iran was forced to back down from its statement yesterday that torture didn't happen in Iran "because it was forbidden in Islam". Our representative was able to refer to a report, published yesterday by Freedom from Torture who have documented more than 5,000 cases of torture in the Islamic republic since the 1979 Revolution.

Replying, the Iranian representative retreated from his earlier position and stated that Iran did not deny that torture took place in the country but that it was not authorised and was carried out by non-state actors — a response that was greeted with general incredulity by the hundreds of delegates present.

In our joint statement made this morning by the International Humanist and Ethical Union, the British Humanist Association, and Center for Inquiry, our representative Raheel Raza told the UN Human Rights Council: "We would like to draw the attention of the Council to a report published yesterday by the UK organisation: "Freedom from Torture" which details thousands of cases of torture in Iran since the revolution. This systematic torture is not confined to a single prison or institution but is spread across the country, showing clearly that this is State policy." 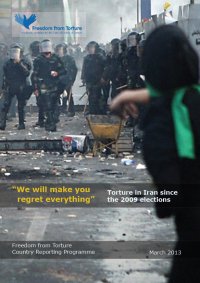 The report (download summary as PDF) by Freedom from Torture, the Medical Foundation for the Care of Victims of Torture, focuses on cases of victims which "all involve torture perpetrated in the lead up to and in the weeks, months and years following Iran’s presidential elections held on 12 June 2009. Together they provide an alarming insight into the brutal methods used by the Iranian authorities to terrorise those individuals – and their family members – engaged in grassroots organising prior to the elections and in the protests relating to the disputed outcome and the human rights abuses that followed."

Of the 50 case studies presented in the report, 26 include victims who had no history of activism or dissent prior to political dissent in the 2009 elections. All the cases involved some form of blunt force trauma (such as whipping or beating). 60% of cases involved sexual torture such as rape, molestation or violence to genitals. Other forms of documented torture included stress positions (64%), use of water (32%), sharp force trauma (such as blades, needles and/or fingernails) (18%); burns (12%); electric shock (10%); asphyxiation (10%) and pharmacological or chemical torture (8%).

Raheel Raza told the Human Rights Council, "His Excellency, the distinguished representative of Iran has clearly been misinformed if he really believes that torture does not take place in the Islamic Republic."

"Torture is always a devastating assault against the dignity and well-being of victims, leaving a life-long boot print on the psyche. In these cases, where it is used as a weapon of political suppression, torture is also a fundamental assault on democratic freedoms.

"The Iranian representative this morning admitted that torture took place, but claimed that non-state actors were responsible for the outrageous treatment of political activists in Iran. In fact the Freedom from Torture report shows clearly that state institutions and officials are involved. Even if it were the case that central government does not commission torture, no regime which is dependent on torture to suppress criticism or political opposition can be legitimate, and government should not stand idle, passing the blame to lower officials. We call on Iran to implement its prior commitment to comply with Article 7 of the International Covenant on Civil and Political Rights prohibiting torture. Iran must implement urgent and fundamental measures to ensure that torture is not sanctioned or performed in its detention centres or anywhere else in the approach to forthcoming elections this June.

"We call on the United Nations to ensure that special procedures of the Human Rights Council are supported, including renewal of the mandate for the Special Rapporteur on the situation of human rights in the Islamic Republic of Iran, to whom Iran should grant unimpeded access to conduct investigations. We urge Member States to ensure that resolutions of the UN Human Rights Council and General Assembly highlight Iran's systematic torture and other human rights abuses. UN Member States must take active steps to ensure that torture is detected and prevented ahead of this year's presidential election."