French Freethinkers call for abolition of the Alsace-Moselle Concordat

The Concordat, signed in 1801, is an agreement with the Holy See which runs counter to the prevailing secularism of France. Under the Concordat, agreed prior to the 1905 law on separation of church and state and still in force, the Alsace-Moselle region gives huge privileges to religion and public subsidies to religious groups.

More than 200 secularists gathered on Place de Broglie earlier this month to demand that in the name of unity of the Republic, secularism should now be implemented in the 3 departments of the Alsace-Moselle region, and the Concordat finally abolished. 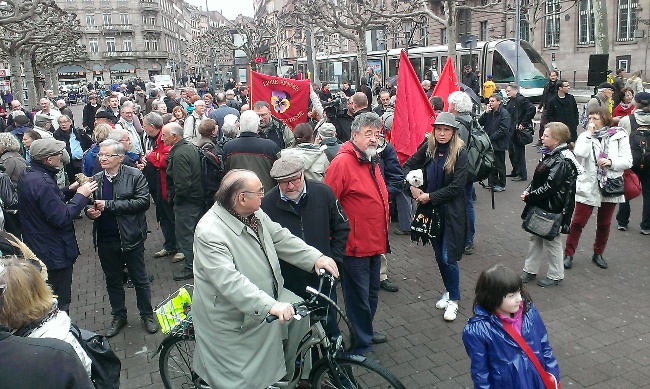 The landmark rally had been prepared by an awareness-raising campaign in Alsace and Moselle, with local press work and secular groups issuing thousands of flyers. The French Freethinkers have partially broken the silence that has surrounded concordat for far too long.

Under the chairmanship of Marc Blondel, President of the FNLP, speakers at the rally included:

The rally condemned the concordats and also the “crime of blasphemy” wherever it exists in its various forms in Europe. There are 14 concordats on the continent, representing a threat to secularism and freedom of conscience everywhere.

The Free Thinkers of Alsace-Moselle and of France demand an end to this clerical anomaly and the extension of secularism in education and the state, in every part of the French Republic.

They welcomed the resounding failure of the referendum in Alsace that foreshadowed the implementation of Act III of decentralisation. Alsace is republican; it should become secularist if 'equality' is not to become an empty term.

Blondel concluded the rally by thanking all participants, from France and abroad. He congratulated the Freethinkers of Alsace-Moselle for their  impressive efforts which ensured the success of this landmark initiative.

Alsace-Moselle has made a date with history.

This article is based on a transalation of the report by FNLP [French].