The collapse of a textiles building in Dhaka killing hundreds of workers in poor working conditions has been reported globally, and drew an estimated 20,000 protesters to the main rally in Dhaka today. This cause is serious and the hurt keenly felt and reflected around the world. The national day of mourning declared last Thursday prompted a number of protests in support of persecuted atheist bloggers to be postponed until tomorrow.

And yet the figure of 20,000 protesting in connection with the building collapse, is at least five times lower than the "hundreds of thousands" who marched earlier in April demanding a blasphemy law with a sentence of capital punishment aimed at atheist bloggers and secular activists.

The International Humanist and Ethical Union (IHEU) warned previously that demands such as a new blasphemy law and the arrest of atheist bloggers for "hurting religious sentiments" should be given no leeway, lest the demands inflate. However, authorities arrested at least four bloggers in April and the government initially said they would consider the 13-point charter of Islamist demands, then changed their minds. 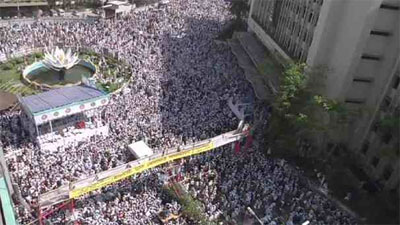 As a result the Islamist parties have indeed expanded their demands. The umbrella platform of Islamic organisations have demanded that a 13-point demand "charter" be met by May 5th under threat of "sieging" the capital city, Dhaka.

The platform’s secretary, Junayed Babu nagari, said, "Our demands are clear. We cannot go home without success. Capital punishment for atheist bloggers is no longer our main demand. Instead we call for re-establishment of full faith and believe on [sic] Almighty Allah in the constitution."

The 13-point charter demands that the secular government's women and education policy be cancelled, that Qawmi Madrassa certification be officially recognised, and for a blasphemy law with a sentence of capital punishment to be implemented.

Hefazat leader Mowlana Jafrullah Khan said, "We are not sure those arrested  were really anti-Islamic bloggers. We want to see the government arresting all of the bloggers who write or post against Islam." (IHEU has received confirmation that the arrested bloggers are all atheists.)

President of IHEU Sonja Eggerickx responds, "We encourage the government of Bangladesh to avoid any further appeasement or flip-flopping, and support them in resisting these unjust and theocratic demands. They must stand on principle and deny all demands which would erode the secular constitution of Bangladesh and which would destroy the established human rights of both religious and non-religious minorities.

"Government must reject outright these demands to punish, let alone execute, atheists merely for expressing their views on religion as atheists. The right to leave, change or criticise religion is enshrined as freedom of religion or belief in international law and that right must be upheld."

IHEU has called on members and supporters to take action in support of the persecuted bloggers.

Confirmed May 2nd Protests in Support of Atheist Bloggers

London: The British Humanist Association is holding a leafleting protest throughout the day outside or near the Bangladesh High Commission in London. Volunteers are asked to email pavan@humanism.org.uk. 28 Queen's Gate London SW7 5JA