The International Humanist and Ethical Union (IHEU),  Atheist Alliance International (AAI) and the Center for Inquiry (CFI) are dismayed that the US-based Appeal of Conscience Foundation has decided to award President of Indonesia Susilo Bambang Yudhoyono their "World Statesmen Award" at its 2013 Special Awards Dinner.

The Appeal of Conscience Foundation is supposed to work for "religious freedom and human rights throughout the world"'. Indonesia is widely criticised for clear violations of human rights specifically on freedom of religion or belief issues.

The secular organisations have jointly written to the Foundation to protest the award, explaining that "Indonesia's record on human rights and religious freedom is very poor and, as President, Susilo Bambang Yudhoyono bears a significant degree of responsibility for the situation.  We urge the Appeal of Conscience Foundation to re-consider this decision and alter its processes so that a similar mistake is not made in the future."

The international criticism follows local opposition to the award for the president (known colloquially as "SBY"), with the Indonesia-based Human Rights Working Group arguing that, "The failure of law enforcement, the lack of efforts to nurture tolerance and the president’s silence on rights violations have contributed greatly to the current climate of intolerance in Indonesia." 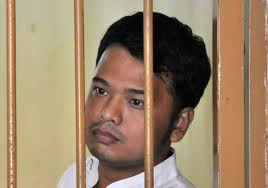 AAI, CFI and IHEU have all campaigned specifically in the case of Alexander Aan, an Indonesian atheist who was attacked and arrested after posting 'there is no God' on Facebook in 2012. The secular organisations note that there are many cases of abuse against religious minorities in Indonesia, as documented by a February 2013 report by Human Rights Watch (Aan's case is on page 81).  Human Rights Watch described President Susilo Bambang Yudhoyono as "inconsistent at best in defending the right to religious freedom".

The Freedom of Thought 2012 report published by IHEU in parternship with allies and members including the American Humanist Association as recently as December,  highlighted Indonesia for its violations of freedom of conscience:

Statistics from Indonesia’s Setara Institute show Indonesia’s worsening track record on religious freedom and human rights: in 2012 there were 264 cases of violation of religious freedoms in Indonesia, up from 244 in 2011 and 216 in 2010.  In 2011 the UN High Commissioner for Human Rights, Navi Pillay, expressed her concern about the increasing reports of violence committed against religious minorities in Indonesia.  In May 2013 the US Commission on International Religious Freedom accused the Indonesian government of violating the right to religious freedom of its citizens and highlighted Indonesia as a country where abuses of freedom of conscience are increasing.

Carlos A. Diaz, AAI President said "The Appeal of Conscience Foundation claims to work ‘on behalf of religious freedom and human rights throughout the world’ and states that ‘a crime committed in the name of religion is the greatest crime against religion’.  Yet, many such crimes are committed in Indonesia by Islamists, against religious and non-religious minorities.  If it genuinely supports these positions, the Foundation cannot award President Susilo Bambang Yudhoyono without substantial damage to its integrity."

Matt Cherry, IHEU International Representative and editor of Freedom of Thought 2012 said, “This award is a slap in the face to prisoners of conscience across the world. While Alexander Aan suffers in an Indonesian jail for posting his beliefs to Facebook, his jailer will be honored in New York as a champion of freedom of belief.  And the Indonesian president will be given the award by a Rabbi who would be forbidden from identifying as a Jew in Indonesia!  It sounds like a piece of Orwellian satire, but unfortunately it’s an example of Orwellian ‘Doublethink’ that besmirches the reputation of everyone associated with it.”

"It is vital that the world continues to remind the Indonesian government to value human rights and to act to protect the freedom of its people to be religious or non-religious as they choose," said Michael De Dora, director of CFI's Office of Public Policy. "All persons, regardless of their geography or nationality, should be able to believe as they choose, and speak freely."

AAI, CFI and IHEU jointly urge The Appeal of Conscience Foundation again to re-consider its decision to award President Susilo Bambang Yudhoyono and to alter its processes so that, in the future, the award will be given to those who actually value human rights and religious freedom.