Reactions to the murder of Narendra Dabholkar

Outrage and huge protests have followed yesterday’s murder of Dr Narendra Dabholkar. The Humanist and rationalist community in India has reacted with dignified anger and sadness, remembering an effective and stalwart campaigner, dedicated to the people of Maharashtra but always ready to cooperate across organizational boundaries. He was one of India’s foremost rationalists, working for social justice, against  caste discrimination, and exposing the so-called miracles of exploititive ‘godmen’. His work was well-known, and some aspect of it is widely believed to have motivated his killers.

An immediate legacy as anti-superstition law is brought forward

Dabholkar also lead the campaign for an anti-superstition Bill in Maharashtra state, and in the space of two days since his assassination, the state government has — after eight years of campaigning by activists and prevarication by the authorities — finally pushed through the Bill which Dabholkar worked so hard to see implemented.

The Maharashtra state government enacted an emergency ordinance to ban rituals, superstition and black magic. A bill similar to which Dr Dabholkar had been campaigning for must still be endorsed by the parliament. Previous versions of the Bill had been approved by the cabinet but lapsed before they could be put to a vote, despite being on the list for eight years. The emergency legislation makes it an offence to exploit or defraud people with ‘magical’ rituals, charms and cures. 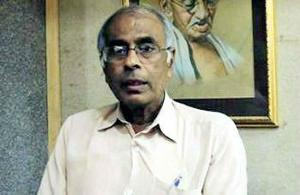 Political tributes to a rationalist “Gandhi”

Maharashtra Chief Minister, Prithviraj Chavan, has compared the murder to the assassination of Mahatma Gandhi, saying, “The way Gandhiji’s voice was suppressed, the same way Dr Narendra Dabholkar’s views and its power were killed by people who did not agree with it. The government will find out the killers and their sources,” the Chief Minister said.

The state’s Nationalist Congress Party president Sharad Pawar also condemned the murder, describing Dabholkar as a dedicated, selfless social activist. “The progressive thought for which Dabholkar gave his life, will not die in Maharashtra,” Pawar pledged.

Tributes from the community

The president of the Federation of Indian Rationalist’s Association (FIRA) Prof Narendra Nayak, is quoted as saying “He was a great activist and had a vision for a superstition and dogma free India. He was a fearless crusader for the cause and his assassination can only make the movement stronger.”

President of the International Humanist and Ethical Union (IHEU), Sonja Eggerickx, said “Our thoughts are with his family and the many rationalist and Humanist colleagues with whom he worked so closely and so tirelessly over the years. Dr Dabholkar’s campaigns brought him onto political territory, but he was always a social reformer motivated by truth and a desire to fight injustice. We urge the authorities to investigate this vile murder and to explore without fear all the possible links to his work.”

IHEU’s international director in India, Babu Gogineni said “Dr. Dabholkar’s work in the past 30 years has been the stuff that legends are made of. He remains a beacon of reason, rationalism and science in India.”

In response to a message of solidarity sent from IHEU to its Members and friends in India yesterday, the Kerala Rationalist Association’s K.N Anilkumar said, “The news of the assassination of Dr. Narendra Dabholkar is really shocking. You have rightly described the iminent danger faced by all similar social activists in India challenging these types of supersticians and godmen. The assassiantion of Dr.Dabholkar is a clear indication that parts of Indian society are becoming more and more orthodox and fudamental with respect to relgion. Dr Dabholkar’s contribution to social reform in India, especially to Maharashtra, is remarkable and will be a part of cultural history of India. I personally remember my acquintance with him. A vacuum will be there for some more time.”

Vidya Bhushan Rawat of the Social Development Foundation told IHEU, “The work carried by him and his organisation is enormous. India and South Asia are not so receptive to free-thinking and we face it regularly in our work… It is a sad day but it can not and should not deter the humanist rationalist activist to work on. India is in danger as religious fascist and Hindu nationalist forces with active support from international and national media, are on the rise. It is a big challenge and we have to fight it. We know much tougher days are ahead. The country is in the grip of hate-mongering people ready to kill people to get their political benefit. We condemn this murder and demand immediate inquiry from the government of Maharastra.”

Innaiah Narisetti, chair of Center for Inquiry India and associate of Indian Radical Humanist Association told IHEU, “Narendra Dhabolkar did wonderful work in Maharastra state. He always colloborated with all Indian rationalist, Humanist, and skeptic institutions. His impact, even though his direct work was confined mostly to Maharastra state, is all-pervading in India. He persuaded the government of Maharastra to introduce a bill in the assembly against superstition. At this crucial juncture [state government had promised to bring the Bill forward in recent days] he was shot dead . Obviously there may be a connection, and thorough investigation as promised by the Maharastra chief minister is the urgent need… Now the effort to spread Humanism should march forward, taking the inspiration from Dr Dhabolkar Narendra.”

“The assassination of Dr Dabholkar was a crime committed against the expression of thought, one day every rationalist who tells the truth will be subjected to such crimes by vested interests,” rationalist Hulikal Nataraj told dna. “I feel the spirit and the journey of right thinking he created from his intellect and hardwork had been cut short.”

Fellow rationalist and a close associate of Dabholkar, Sanal Edamarku, himself in self-imposed exile from India after blasphemy accusations were made against him, said on Facebook that Dabholkar “worked at grass root level to educate common people and helped them to come out of superstitions and blind beliefs. I call upon all rationalist friends to get inspired with his wonderful work and continue our work vigorously. That will be the best tribute to Narendra Dabholkar.” Elsewhere he said, “He was one of the most wonderful soldiers of rationalism in Maharashtra because he was taking the movement down to the villages on one side and the legislature on the other. The rationalist movement has been growing very fast over the last 10 years. I have experienced a lot of threats in my life and so have many others,” he said. “It is not the victims of superstition who are normally against rationalists but the exploiters who are using superstition and are using the gullibility of people, they are the ones against us.”