Syria and the Ethics of Intervention

In the wake of chemical weapons attacks on civilians in Syria, there has been much debate about the ethics of “intervention”, in particular around the possibility of a “limited strike” aimed at Syria’s chemical weapons production and storage sites. The possibility of military action by the United States, United Kingdom, France and Turkey have been discussed. The UK parliament voted last week against action for now, France has said it will not act unilaterally, while the US is apparently preparing to make an intervention. There has been discussion from think-tanks and rights groups, high-profile journalists on the process of authorizating attacks, and religious theologians and ethicists on the rights and wrongs of intervention.

IHEU invited a number of secular thinkers and campaigners for their view on the ethical considerations and implications. Below we publish three of the replies by experts based in America, on the question of whether the US or other powers should intervene.

Zack Beauchamp is the editor of TP Ideas, ThinkProgress‘ section on political thought, and a reporter at ThinkProgress. You can reach him on Twitter at @zackbeauchamp. 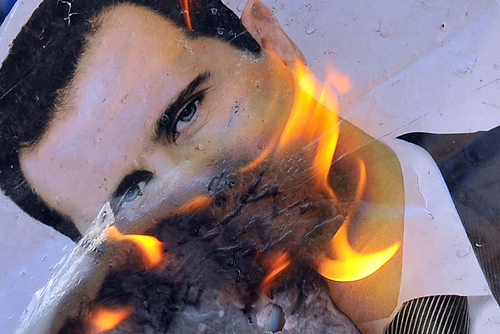 If you want to think clearly about the proposed strikes on Syria, stop thinking about America’s national interests. Contrary to what your average Congressperson will no doubt say during the upcoming debate over authorizing President Obama’s plan to strike, the question of whether the United States ought to lob cruise missiles at Assad’s forces will in no way be answered by appeals to self-interest.

The core principle of modern secular ethics is, to paraphrase an obscure passage, that all people are created equal. Our obligation to respect the rights of others is grounded firmly in their humanity, not their gender, skin tone, religious (dis)belief, or any other arbitrary characteristic humans have historically used as a pretext to discriminate against their fellows. National origin belongs on the list of moral irrelevancies: it’s not like Syrian civilians being gassed by the Assad regime chose to be Syrians. The American government has strong moral obligations to Syrians for the same reasons it has strong obligations to all Americans and not just the white male ones who counted at the nation’s inception.

This means the argument that America should stay out of Syria if it doesn’t have any “vital national security interests” at stake, already made by Sen. Ted Cruz (R-TX), is bunk. Chris Farmer, a former Navy war planner who wrote a public assessment of a strike plan that sounds very similar to the administration’s, believes the US could hit the Syrian military “quickly, easily, with no risk whatsoever to American personnel, and a relatively minor cost” by lobbing missiles from outside Syrian air defenses’ range. Rejecting this kind of cost-free action because it’s not in American “vital national security interests” is morally obscene, plain and simple.

But Obama’s Syria adventure isn’t actually costless: it’s just that the costs if the strikes fail will be born by Syrians, not Americans. Even the most precise weapons often kill innocent civilians, and Assad is already using prisoners as human shields in some military facilities that strikes might target. This is why, in classic just war theory, there’s a presumption against going to war: military action kills people who might not otherwise die. The most important question then becomes whether the proposed action would net save lives by enforcing the norm against chemical weapons use without adverse consequences, like Assad escalating brutality against civilians. Smart analysts disagree on this core point (Farmer, for his part, is skeptical), and the issue of effectiveness, not American interests, is where public and Congressional debate should focus.

But the ethics of war isn’t just about body counts. Just war theorists generally believe in a principle called “right authority,” the idea that warring parties need proper moral standing and authorization before they can justly enter a war. If, as some international law scholars suggest, attacking Assad without UN authorization is illegal under international law, then we need to debate whether any war that violates international law necessarily lacks right authority. We also need to weigh the consequences for the project of making the world a more peaceful place of circumventing one part of the international order (the UN) to reinforce another (the Geneva Protocol and the chemical weapons taboo). These sort of issues, not entitled pieties about “vital interests,” ought to be front and center as Congress debates giving Obama the green light.

Massimo Pigliucci is chair of the Department of Philosophy at CUNY-Lehman College, and serves on the board of NYC Skeptics and the advisory board for the Secular Coalition for America. He tweets @mpigliucci.

It’s a mess with no good option in sight. That said, there are a number of issues to consider. I have read several commentators who just don’t see what’s so special about the (alleged) use of chemical weapons by the Syrian regime. Dead civilians are dead civilians, they say. This is obviously true, but not at all the issue at hand. The issue is that most of the world’s countries (Syria and Israel not among them, incidentally) have agreed to ban the use of chemical weapons because of its horrible effects, particularly on civilian populations, as manifested during World War I. This is similar to the idea of banning the use of atomic weapons, even though one could easily deploy an atomic bomb that kills a much smaller number of civilians than, say, the allied bombing of Baghdad during the Second Gulf War. In other words, the issue is the means, in this case, not just the number of casualties.

From this perspective, the US – as well as any nation that has signed the agreement to ban chemical weapons – has a moral responsibility to intervene. And that’s where things really become messy: what does it mean to intervene? With what likely effects? From what I’ve read so far, the Obama administration is considering a very limited type of air strike, which would amount to little more than a slap on the wrist to the al-Assad regime. That, frankly, seems to be something designed more to feel good about our own moral stand than anything else, and is therefore not sufficient reason to act. Indeed, it could cause the exact opposite effect: if al-Assad (or any other crook in the world who has access to chemical weapons) sees that the worst that can happen is a largely inconsequential air strike, he may actually be emboldened in using chemical weapons again, on a larger scale.

Does this, then, mean that the US should involve itself on a far larger scale, perhaps up to and including committing ground forces? No, for a variety of reasons that include the US’s lack of credibility vis-a-vis military interventions in the Middle East (or elsewhere) recently, considerations of the amount of resources that would be needed, the issue of the likelihood of success, and the question of whether a radical Islamist government that would likely succeed al-Assad would be better for either the US national interest or the very people of Syria.

Here is a different solution, which I don’t expect the Obama administration to consider, but that nevertheless should be on the table: announce that any head of state that authorizes the use of chemical weapons against its own civilian population will be hunted down and killed, bin Laden style. Yes, there are plenty of moral issues to be debated there too, obviously; and no, neither the US nor any other government will ever agree to endorse that strategy, in part because of fear of setting a precedent that could come back and bite them in the arse. But boy, would that be more than just a slap on the wrist.

Michael De Dora: There are more questions than answers and we must start with the facts

Michael De Dora works at the Center for Inquiry as director of the organization’s Office of Public Policy and its representative to the United Nations. He tweets in a personal capacity @mdedora.

Reasoning on all moral and political dilemmas must begin with a surveying of the facts. In regards to the situation in Syria, there are several important facts to consider.

One fact is that the majority of the international community has signed onto the Chemical Weapons Convention (1992), which outlaws the production, stockpiling, and use of chemical weapons. Syria, one of only seven UN member states to not sign this agreement, is in clear violation of international consensus.

Another fact is that evidence strongly suggests Syrian military forces have used chemical weapons on rebels and dissidents, resulting in more than thousands dead, including many children. This should trouble the international communities that have signed on to the Chemical Weapons Convention.

In considering these facts, I am heartened that international leaders are being guided not by religious faith or dogma, but by reason and ethics. In particular, there has been much discussion on just war theory, which proposes military action is justified only if all other options have been exhausted, it is intended to bring about peace, it is proportionate, and it will likely help to solve the problem.

People on all sides of the debate have tried to use just war theory to oppose or justify strikes in Syria. But most of their arguments are problematic.

Proponents of military strikes in Syria have argued that intervention is necessary because all options have been exhausted and “limited, narrow,” strikes would prevent further harm. Yet the UN and many national signatories to the Chemical Weapons Convention, including Germany and Britain, have decided military action is not the correct strategy. This suggests there could be room for more diplomacy. Is the United States really in a position to unilaterally enforce with military might generally agreed upon international law around the world? Also, there is the chance that the strikes could set up a chain reaction of bombings on both sides that will lead to more civilian deaths and, potentially, another war like the one we just conducted in Iraq. Have proponents considered this very realistic possibility?

Opponents of military strikes have argued that intervention is unjustified because diplomacy is possible and the strikes might harm some civilians. Yet this conflict has been ongoing for more than two years, and more than 100,000 people are dead, and millions more displaced. If the regime hasn’t been convinced by now, what are the chances things will change? Also, while some have said strikes could kill more innocent civilians, what will be the result of inaction? Is there any reason to believe Syrian President Bashar al-Assad will stop his attacks?

To me this suggests there are more questions than answers regarding Syria. However, both proponents and opponents of military strikes have made important points. For instance, proponents are correct that there is a serious problem in Syria that must be addressed, and soon. Yet, as opponents have argued, there must be clear and legitimate goals for any military exercise. In addition, goals must be greater than simply gaining moral credibility; they must aim to solve a problem that cannot be solved in any other way, and lessen suffering.

One last thing I would say is this: we should ask ourselves fundamental questions on how situations such as this even begin. Most importantly, what are the factors that allow Syria and other countries devolve into senseless killing? And are there non-military actions we can take now – perhaps even in concert with urgent military action – to prevent us from having to consider military strikes in the future?

All authors above are writing in their personal capacity and views expressed above do not necessarily reflect the policy positions of the organizations they are affiliated to or of IHEU. Photograph by James Gordon.