A partner of the International Humanist and Ethical Union (IHEU) in campaigning against slavery has been awarded the 2013 United Nations Human Rights prize. 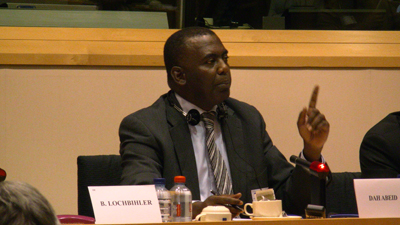 For the past three years, the IHEU delegation at the UN Human Rights Council have been raising the issue of slavery in Mauritania using evidence provided by IRA. In September 2013 during the most recent Council session, IHEU hosted a seminar on the on-going scandal of slavery in Mauritania and the legal and constitutional obstacles to progress in the country.

The award in effect supports the work of IRA, IHEU and other human rights campaigners, in the face of the Mauritanian government’s ongoing claims that since the passage of anti-slavery legislation in 2007, slavery no longer exists in the country. In fact 15% of the population, mainly black Africans from the south of the country, are still living as slaves.

In a statement following the award, Roy Brown, IHEU Main Representative at the UN Geneva said: “This award is a tribute to the courage and tenacity of Biram Abeid and all of his team who, in the face of harrassment, arrest and beatings have continued to fight the scourge of slavery in their country. Conversely it is a slap in the face to the government’s attempts to sweep the issue under the carpet. Congratulations to everyone who has helped raise the plight of these slaves in the UN.”