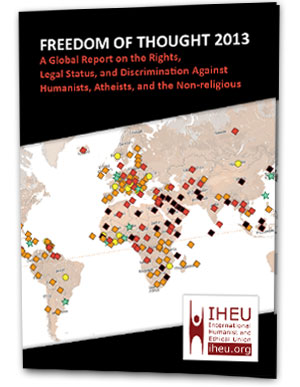 The IHEU Freedom of Thought Report 2013 has been published online today at its dedicated website freethoughtreport.com/download-the-report.

It is the first report focusing specifically on the rights, legal status, and discrimination against Humanists, atheists and the non-religious in every country in the world.

The report found that:

A new report launching today, Tuesday, examines every country in the world for legal discrimination and human rights violations which specifically affect atheists, humanists and the non-religious.

The “Freedom of Thought” report by the International Humanist and Ethical Union, IHEU, found widespread discrimination by governments in every region.

Issues  from children forced to pray in school classrooms, to the most “Grave Violations”.such as death for breaking “blasphemy” laws, are considered in the report’s comprehensive rating system.

12 countries in Africa, 9 in Asia, and 10 in the Middle East, were given the worst rating for committing “Grave Violations”. Some of these governments were found to openly incite hatred against atheists, or authorities which systematically fail to prosecute violent crimes against atheists.

Furthermore, in 12 of the worst-offending states, religious authorities can put atheists to death for the crime of “apostasy” (i.e. leaving religion; in all cases the religion was Islam).

Around the world, the Report found 55 countries with ‘blasphemy’ laws on the books, or other laws forbidding criticism or “insult” to religion. In 39 such countries the law mandates a prison sentence for blasphemers.

Three states, Pakistan, Saudi Arabia, and Iran, can execute “blasphemers”. In another three states, militant Islamists acting as religious authorities in some areas are also dealing out Sharia punishment including death for “offences” to religion: namely Al-Shabaab in Somalia, Boko Haram and other Islamists in Nigeria, and the Taliban in Afghanistan.

The President of the IHEU, Sonja Eggerickx, said, “The opening words in last year’s edition of the report, came from the UN Special Rapporteur on Freedom of Religion or Belief. This year we thought we would flip it around: we asked the victims to introduce our work.”

The report’s opening remarks come from two atheists accused of apostasy and blasphemy and now living in exile or in hiding. (The cases of both Alber Saber and Kacem El Ghazzali are also featured in the report).

In the opening remarks, Kacem and Alber write:

“Freedom of thought and belief must not be compromised. When regimes violently attack people for their ideas and beliefs, all human rights suffer…  In spite of international treaties and conventions, many states discriminate in subtler but important ways. And this has a global impact. Laws against “insulting” religion in relatively secure, relatively secular countries, for example, are not only analogues of the most vicious blasphemy laws anywhere in the world, but help to sustain the global norm under which thought is policed and punished.”

In line with their words, several possibly unexpected nations come out rather badly on the scale of five classifications — which range upward in severity from “Free and Equal”, through “Mostly Satisfactory”, “Systemic Discrimination”, “Severe Discrimination”, to “Grave Violations”.

Four western countries are rated “Severe” because they can jail people for breaking laws prohibiting ‘blasphemy’ and other free speech on religion.

Those countries are Iceland (a sentence of jail for up to 3 months), Denmark (up to 4 months), New Zealand (up to a year), Poland (up to two years), Germany (up to three years) and Greece (up to three years). Jail time could be handed to someone who simply “blasphemes God” in the case of Greece, or “insults the content of other’s religious faith” in the case of Germany.

The Report’s editor Bob Churchill, commented, “It may seem strange to see some of these countries up there with Uzbekistan or Ethiopia (also rated “Severe”) but as Kacem and Alber say in the preface, these laws set a trend.  Failure to abolish them in one place means they’re more likely to stay on the books in another place, where they can be disastrous. And even in the western countries with blasphemy-type laws there is evidence that they chill free expression, and in some countries, like Greece and Germany, people are actually prosecuted and convicted and do jail time under these laws.

“All those six western states outlawing blasphemy only got a Severe rating because of that law. They might not have a completely clean slate, but they wouldn’t have a Severe rating if they abolished that law.”

IHEU hopes the report will help shed light on how lesser but systemic discrimination in most countries privileges religion and that it will drive change on the worst violations.

“Abolition of blasphemy is what the EU Guidelines on Freedom of Religion or Belief are pushing for, it’s what the UN Special Rapporteur on freedom of religion or belief wants: a global repeal of blasphemy to protect everyone’s right to convert.  If these six countries can’t do it, what hope is there for countries that punish insults to religion with death?”