A report released by the United Nation’s Special Rapporteur on freedom of religion or belief has highlighted the need to tackle manifestations of collective religious hatred. In the report, Heiner Bielefeldt, the Rapporteur, specifically focused on the root causes of religious hatred and the political factors which are known to aggravate it. This specific focus was chosen in order to better understand the phenomenon of collective religious hatred and to provide the groundwork for the development of effective prevention and coping strategies. The British Humanist Association (BHA), which met with Mr Bielefeldt in 2013 along with the International Humanist Ethical Union (IHEU), welcomed the report and in particular the focus on dialogue and the support of the Rabat Plan of Action recommendations in relation to blasphemy laws. 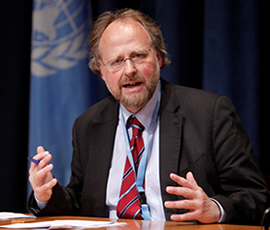 “At the national level, blasphemy laws are counter-productive, since they may result in de facto censure of all inter-religious or belief and intra-religious or belief dialogue, debate and criticism, most of which could be constructive, healthy and needed. In addition, many blasphemy laws afford different levels of protection to different religions and have often proved to be applied in a discriminatory manner.”  The Rabat Plan of Action therefore recommends that “States that have blasphemy laws should repeal them, as such laws have a stifling impact on the enjoyment of freedom of religion or belief, and healthy dialogue and debate about religion.”  The Special Rapporteur would like to confirm that, according to his experiences, blasphemy laws typically have intimidating effects on members of religious minorities as well as on critics or dissenters.”

The report argues that collective religious hatred is not a natural phenomenon, but is something that can be dealt with through widening the public sphere and developing trusting relationships between different communities. Crucially the report does not see legislation as the answer for preventing this from occurring, instead it argues that for collective religious hatred to be a thing of the past what is most important is the bringing together of the communities and the institution of discourse and dialogue.  Several recommendations are made including the institution of trust-building exercises, both at the institutional level by establishing trustworthy public institutions, and at the community level by promoting meaningful communication between different religious or belief communities.  The report insisted that such activities should always be based on respect for freedom of thought, conscience, religion or belief.

Andrew Copson, BHA Chief Executive and First Vice President of IHEU commented ‘Whilst the calls for such moves towards peace and reconciliation are always to be applauded we must remember that whilst the foundations for such moves are being made people around the world fall victim to religious and belief based hatred on a daily basis. While the report focuses on the development of trust between institutions, we must remember that on a short-term basis it is legislation that keeps people safe, and so the pursuit of effective legislation should be seen as an equal priority with the trust-building exercise the report recommends. We particularly welcome the Rapporteur’s support for the Rabat Plan of Action in relation to blasphemy, our recent Freedom of Thought report highlighted how blasphemy laws are often used to place restrictions on freedom of speech, and on the ability to criticise religious institutions. They have no place in a free and democratic society and the abolition of blasphemy laws must form part of efforts to strengthen human rights around the world.’

Report of the Special Rapporteur onfreedom of religion or belief, Heiner Bielefeldt:
http://www.ohchr.org/EN/HRBodies/HRC/RegularSessions/Session25/Documents/A-HRC-25-58_en.doc

Freedom of Thought 2012 – A Global Report on Discrimination Against Humanists, Atheists and the Nonreligious:
https://humanists.international/files/IHEU%20Freedom%20of%20Thought%202012.pdf

This story is re-published with permission from the British Humanist Association.