The world may not have seen the last in terms of the inane witch hunting campaign being waged by pentecostal pastors in Nigeria. New Christian witch hunters-pastors and churches- are emerging with force and ferocity. Another ‘Kill the Witch’ miracle crusade has just been announced to take place next week. It will be held in Calabar, the capital of Cross River State in Southern Nigeria. 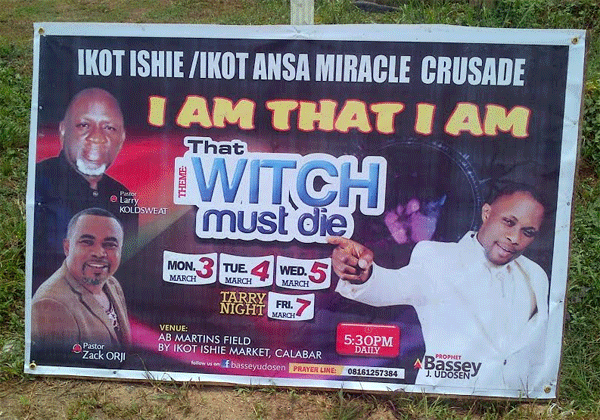 According to a poster being circulated in the city, the event :”Ikot Ishie/Ikot Ansa Miracle Crusade I AM THAT I AM” is to be held on March 3-5 with a ‘Tarry Night’ on Friday March 7 at AB Martins Field by Ikot Ishie Market in Calabar.

The theme of the event ‘That Witch Must Die’ is a clear indication of what the program is all about- an event to incite violence and hatred against innocent citizens.

The poster has this telephone number ‘08161257384’ as the ‘prayer line’. Prophet Bassey J. Udosen is the main organiser while Pastor Zack Orji, a Nollywood actor and Pastor Larry Koldswaet, one of the actors in Helen Ukpabio’s notorious movie ‘The End of the Wicked’ will be preaching at the event.

Calabar is the headquarters of Helen Ukpabio’s Liberty Gospel Church. Belief in witchcraft is very strong in the city. Vulnerable persons particularly children are often targeted and abused in the name of sorcery. The activities of pentecostal churches and pastors have been linked to the persecution of child witches in the region. Efforts to bring these dark age minded evangelists to book have proved ineffective as demonstrated in the recent announcement of this ‘Kill the Witch’ crusade.

Organising church programs that literally say ‘That Witch Must Die’ expressly undermine efforts to end child witch hunting in the region. Nigeria will not win the war against witchcraft-related abuse of children if it continues to turn a blind eye on church programs like this that sanction the killing of witches.

This is because these programs reinforce the link between misfortune, sorcery and these vulnerable innocent members of the population. They recharge the superstitious notion that witchcraft is evil and any alleged witch is dangerous to the society, deserves no mercy and should be killed.

Witch hunting is a traditional practice which has been appropriated by pentecostal church entrepreneurs in their quest for evangelical relevance and capital.

The theme ‘That Witch must die’ is inspired by the Biblical injunction in Exodus 22.18 which says ‘Suffer not a witch to live’. So, the Christian connection to this modern day witch hunt is evident.

A ‘Kill the Witch’ miracle crusade is not an exercise in freedom of religion as many people may think. It is actually an abuse of the right to freedom of religion. Such a crusade promotes witchcraft accusations which are illegal in Nigeria. It incites hatred and violence against accused persons, which is a criminal offence. Unfortunately, we have yet to see any church or pastor prosecuted for this offence in Nigeria.

That notwithstanding, we shall not let up the pressure on the authorities in Calabar, Cross River State and Nigeria to take action and bring these witch hunters to justice. We shall not abandon the campaign to protect children from the vicious and virulent campaign of Nigeria’s pentecostal pastors who are trapped in a medieval mind warp.

We shall continue to shine the light on the schemes of these charlatans who are masquerading as pastors, using churches as fronts and witchcraft belief as a power base to demonize innocent children and exploit poor ignorance members of the community.

So join efforts with us to stop this ‘Kill the Witch’ Miracle Crusade in Calabar. Contact the organisers through their Facebook or Twitter accounts or better through the telephone/prayer line contact on the event poster. Let these evangelical con artists know that the world is watching, and will hold them accountable someday.

Witch hunting by pentecostal churches in Nigeria must stop.