The president of Uganda, Yoweri Museveni, has more or less promised to sign the infamous Anti-Homosexuality Bill, this morning, citing input from “scientists” in Uganda. The International Humanist and Ethical Union challenges the interpretation that Museveni has placed on the short scientific paper he received. 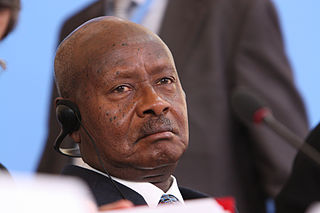 Yoweri Museveni, president of Uganda since 1986

Museveni’s interpretation is that: “Their unanimous conclusion was that homosexuality, contrary to my earlier thinking, was behavioural and not genetic.”

This is plainly contradicted by the report itself, which repeatedly states the role of genes in forming sexuality including homosexuality.

Museveni further states that his decision is pending on only one point: “I have now received their signed document, which says there is no single gene that has been traced to cause homosexuality.  What I want them to clarify is whether a combination of genes can cause anybody to be homosexual. Then my task will be finished and I will sign the Bill.”

The International Humanist and Ethical Union (IHEU) disputes the accuracy of Museveni’s reading of the paper. The paper in fact needs no such clarification as it already states that genetics is a factor.

Most media commentators have failed to report the scientific paper accurately, and Museveni’s interpretation seems to be based on a single sentence from the report, namely “Genetic studies have attempted, though unsuccessfully to pinpoint to one specific homosexual gene.”

However, the full paper can be found online (PDF).

In fact the actual document states repeatedly that sexuality is determined by a number of factors including biology. It states:

“Sexuality is determined by biology (anatomy, physiology, biochemistry) and how one relates to others which is a function of psychology, sociology, and the culture in which one lives…”

“Ultimately, these functions are determined by genes and their interactions with the environment.”

“Homosexual behavior has existed throughout human history including in Africa.”

This is hard to account for if — as some proponents of the anti-gay bill argue — homosexuality is culturally imported and acquired behaviour.

“Studies in the animal world have also shown homosexual practices to exist in animal and insect species.”

Again, it’s impossible to argue that homosexuality is reducible to a “lifestyle choice” given this fact about non-human animal behaviours.

As Musevni stated, the report does assert, correctly, that “Genetic studies have attempted, though unsuccessfully to pinpoint to one specific homosexual gene.” However that doesn’t mean there is no genetic influence. Rather, as the report immediately goes on to say:

Sonja Eggerickx, president of IHEU, said, “The basis on which Museveni is supposedly making this decision is false. He has possibly been badly advised about the content of the paper, which plainly does state that genetics has a role in determining all our sexualities, including homosexuality. We make this point because Museveni has said his decision depends on it.

“But in reality, I do not think it matters, morally, how much our sexuality is determined by “genetic” or “cultural” factors, or by “nature” or “choice” or “culture”. It is already a mistake to fetishize the origin of homosexuality: The focus should be on disputing the insidious myths spread about gay people in Uganda and all countries which criminalise homosexuality. In a free society which respects human rights, the focus should be on defending privacy and the assertion that the sex lives of consenting adults are no business of the state.”