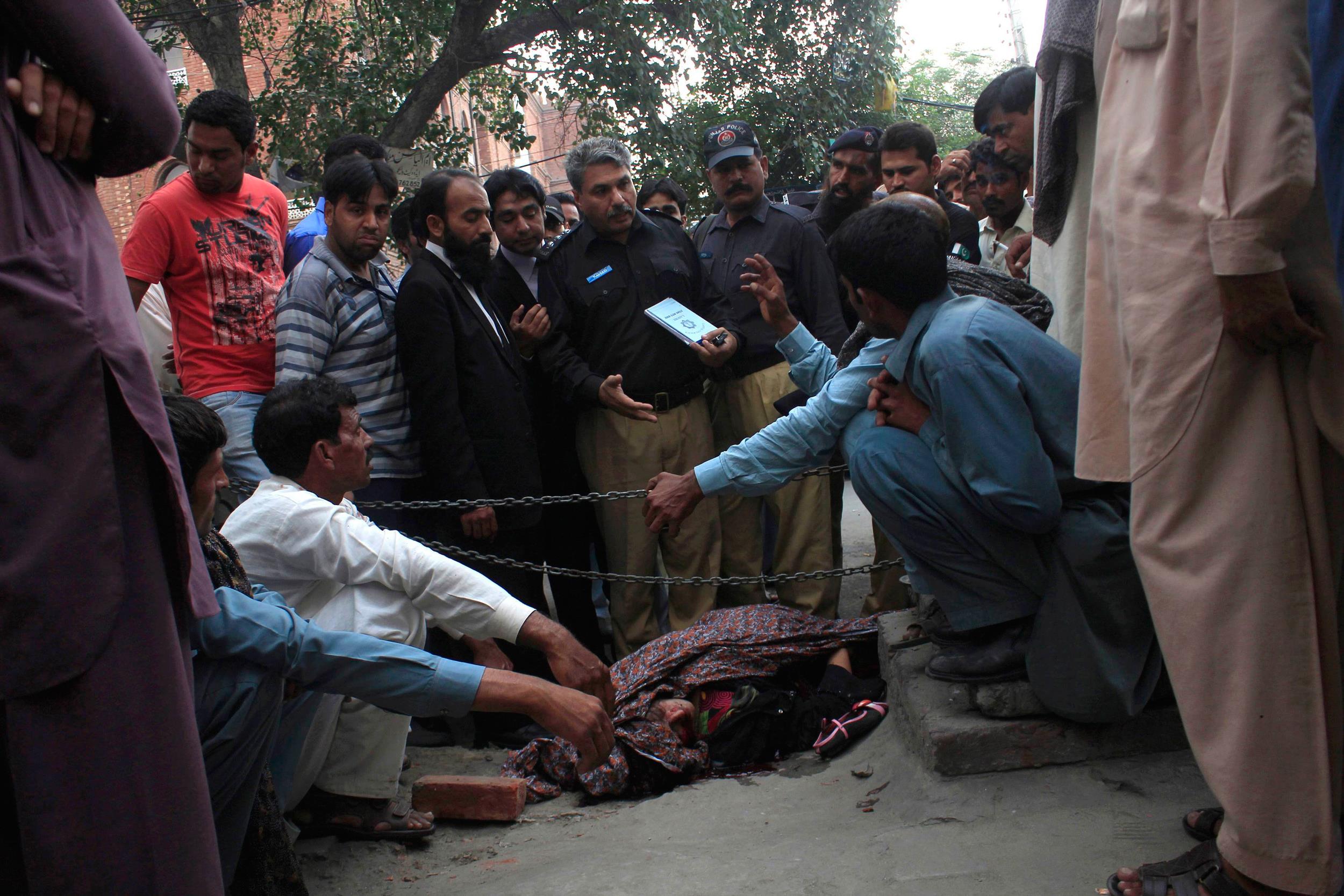 Farzana Parveen was murdered with bricks by relatives outside court in Lahore, Pakistan

The International Humanist and Ethical Union (IHEU) has spoken at the UN Human Rights Council about how gender stereotyping, the desire to control women, and impunity for criminals, all contribute to the entrenchment of “honour”-based violence and oppression.

The full text of Elizabeth O’Casey’s statement follows below:

As noted by the OHCHR commissioned report on the issue, wrongful gender stereotyping is a contributing factor in the violations of many rights, including freedom from gender-based violence[1]. The Special Rapporteur on violence against women has observed that gender stereotypes dictating that men should control women are forms of gender-based structural violence[2].

One common way in which this stereotyping underpins male control of women, often manifesting itself violently, is through the notion of ‘honour’. Honour-based violence[3] is understood to derive from a desire to control the behaviour of the female, with the honour of a family vested in her body. Honour-based violence reflects interpersonal and structural violence simultaneously which the Special Rapporteur has identified in terms of gender ideological- based violence[4].

The societal propagation and acceptance in a number of states of a woman’s role as the honour-bearer of the family was demonstrated in the most tragic and abhorrent of manners recently when a Pakistani woman was stoned to death by her own family for marrying a man of her choosing, whilst others looked on[5]. Likewise in India, it has been suggested that the recent gang-rape and hanging of two girls might have been honour-motivated[6]. The ways in which gender stereotypes can have a disproportionate negative impact on minority groups of women, such as those from lower caste groups is evidenced also[7].

The cases highlight the multi-faceted nature of violence against women grounded in gender ideology, where societal acceptance and impunity feed the phenomenon. Notably, some recent comments at the political level in India[8] have revealed the work that needs to be done to eliminate the casual misogynist frameworks holding up discriminatory and violent structures oppressing women. We suggest therefore, that along with a desperately needed legally-binding instrument combatting violence against women, the Council needs to concurrently encourage a transformation of the gender-stereotyping frameworks so many women currently live and suffer under. We thus extend our gratitude to the Council for its highlighting of the issue as part of this Annual day on the rights of women.

[3] The UN has estimated that at least 5,000 women are murdered by family members each year in “honour killings”. See https://www.unfpa.org/swp/2000/english/notes.html#3-31. According to women’s advocacy groups the figure could be around 20,000. In general, given the difficulty surrounding the reporting of these crimes, official statistics are understood to be grossly underreported (see A/HRC/20/16).

[5]This case was merely one amongst hundreds each year in Pakistan, http://www.theguardian.com/world/2014/may/27/pregnant-pakistani-woman-stoned-to-death

[7] See p2 of Concept Note for Annual full-day discussion on the human rights of women (HRC res. 6/30), 26th Session of the UNHRC

[8] E.g. Following the case being brought to light, the home minister of Madhya Pradesh, Babulal Gaur, said that rape was a “social crime […] sometimes it’s right, sometimes it’s wrong.” Other politicians were also accused of trivializing the crime with comments including an observation that rapes “happen accidentally,” while another suggested “boys make mistakes”. See http://edition.cnn.com/2014/06/12/world/asia/india-rape/