What is free expression when journalists and activists are “banned or punished by lashes, prison or the death penalty”?

International Humanist and Ethical Union (IHEU) spoke yesterday afternoon at the UN Human Rights Council on how many states are failing to uphold free expression, in particular for human rights activists and journalists. 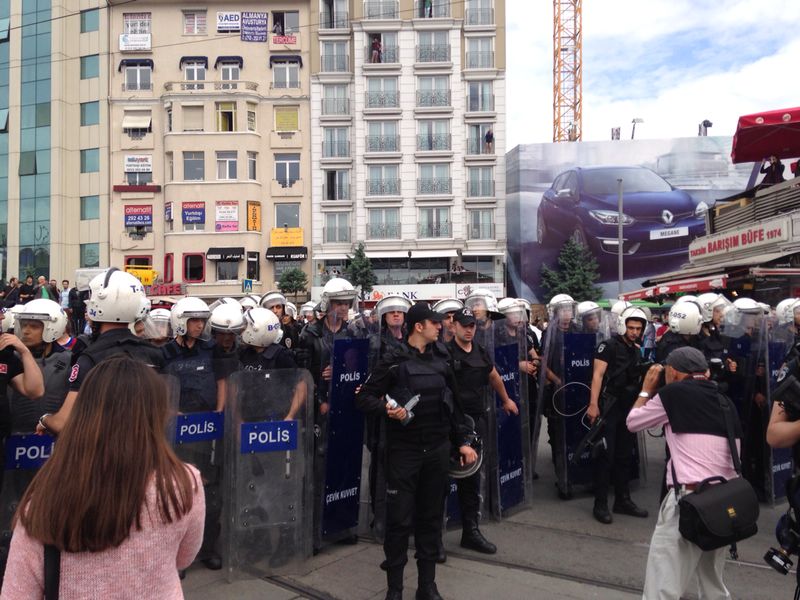 Taksim Square anniversary protests, Turkey, May 31st 2014, at which protesters were barred from entering the square

Hannah Bock, who was present at the Taksim anniversary event in Istanbul last month which was widely reported for the authorities’ suppression of protesters, told the council that the United Nations’ aspirations to freedom of expression were excellent.

However these aspirations are being tarnished by states which harshly restrict and punish reporters, protesters and human rights activists.

Her full statement follows below:

Freedom of expression for Human Rights activists and journalists

We welcome the reports by the special rapporteurs Maina Kiai[1] and Frank La Rue[2] and would like to put on record our appreciation for their remarkable work. Mr Kiai noted that Human Rights defenders and journalists are at risk[3], whilst Mr La Rue underlined the importance of the work of these defenders in guaranteeing freedom of expression in the electoral process[4]. But how can we have true free expression when the independent and peaceful work of journalists and activists is banned or punished by lashes, prison or the death penalty in a number of states, some of whom are members of this council?

On the 31st May, I was an observer at the anniversary of the Taksim protest where CNN reporter, Ivan Watson, was arrested when talking about the fact that protesters were not allowed into the square.

In Saudi Arabia Mr Al-Khair, director of MHRSA (Monitor of Human Rights in Saudi Arabia) is currently in prison and reported to be suffering from torture[5]. Neither his wife (a fellow Human Rights defender) or European and US diplomats were allowed at the hearing of his case. Officially the reason given was security. Mr Al-Khair has been accused of insulting a judge, the king and prejudicing public order[6], however he has done nothing other than share information on Human Rights situations.

Over the past three months, and since legislation against terrorism in Saudi Arabia was passed, we have witnessed more journalists and human rights defenders like Mr Al-Khair being accused and imprisoned. In the case of Raif Badawi, whose crime was to facilitate respectful discussions about Human Rights situations, we saw his sentence lengthened and his lashings increased to 1,000.

The United Arab Emirates has banned for life Ms Meads of Garden Court Chambers in London from entry to work as a human rights advocate for several NGOs like GC4HR (the Gulf Centre for Human Rights) and ANHRI[7]. Khalid Ibrahim, co-director of GC4HR, was detained and denied entry into Jordan in March because of his activism[8].

Mr President, states who have ratified the Arab Charter on Human Rights, and/or Article 19 of the UDHR or the ICCPR have a duty to guarantee the right to freedom of expression. Furthermore, under the UN GA’s Declaration on the Rights of Human Rights Defenders, everyone has the right, individually and in association with others, to impart or disseminate to others, information and knowledge on all human rights and fundamental freedoms[9].

We urge the Council and the international community to protect fully the rights of Human Rights defenders and journalists to speak freely and protest in peace.

Hannah Bock is also a volunteer of GC4HR. [This statement by Hannah Bock was delivered by Elizabeth O’Casey on her behalf.]