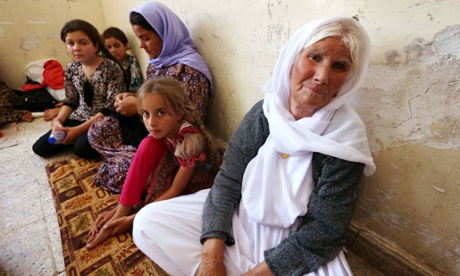 Yazidi women and girls from Sinjar province who fled ISIS violence an the threat of abduction (photo: Guardian)

There are more than 29 million people living in slavery across the world.

From Sudan to Pakistan, there are people being held against their will, whether as domestic slaves, sex slaves or as victims of forced marriage. The crisis in Iraq has led to Yazidi women being abducted and used as sex slaves, in Sudan and Mauritania there are still grave problems with slavery where black Africans are enslaved by Arabic Africans; this despite government protestations to the contrary.

At the 27th session of the UN Human Rights Council, IHEU representative Hannah Bock spoke out about this issue and called on the international community to do more to combat the shameful and widespread practice. Her full statement follows below.

We would like to welcome the new Special Rapporteur, and thank her for her detailed reports.

In accordance with the report of the Mission to Mauritania[4] the IHEU urges the Mauritanian government to do more to practically eliminate the “mark of slavery” in every day life and to enforce anti-slavery laws, without corruption or hesitation.[5]

Whilst we were pleased to hear of the improvements being made in Kazakhstan, and await the mission report, we remain concerned given its record on forced and bonded labour[6].

We would also like to draw attention to the situation of the thousands of Dinkas in Sudan, many of whom are under 18. Dinka slaves are sometimes beaten, raped and even killed. Many are forced to convert to Islam, giving them Arabic names and often calling them “dogs”, “dirty” or “abeed” (slave)[7].  We are also informed that slaves’ sons are being publicly raped by masters – or a master’s family and friends. We share the Special Rapporteur’s particular concern over the high prevalence of children living as slaves[8]. Like 15 year-old Garan John Aguot Tong, thousands of children grow up as children of slaves, living without education and in extremely impoverished conditions.[9]

Everyone has a right to a free and independent life, Mr President; the IHEU urges all states and the international community to do more to extinguish slavery from the world.

[5]     [IHEU has reported and spoken out over the last 3 years on the slavery situation in Mauritania.]