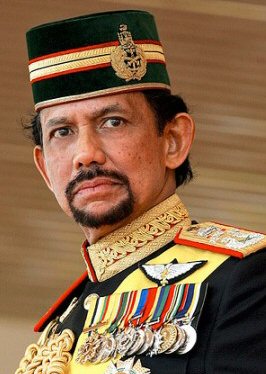 Earlier this year, Brunei started the process of introducing Sharia law into its penal code. The new Penal Code contains a range of provisions that restrict the right to freedom of thought, conscience and religion. They include harsh penalties for not performing Friday prayers or observing Ramadan and expanded restrictions on the rights of individuals to hold or change their religious beliefs or to speak freely about those beliefs.

The revised laws also criminalize printing, disseminating, importing, broadcasting, and distributing of publications deemed contrary to Sharia. When fully implemented, the code will include the punishment of stoning to death, and the criminalisation and application of the death penalty for consensual sex between adults.

During its Universal Periodic Review at the UN Human Rights Council, the International Humanist and Ethical Union (IHEU) expressed its deep concern at these developments in Brunei and urged it to suspend the implementation of its Penal Code and Brunei to introduce a justice system that is fully compatible with its international human rights commitments.

Our statement delivered by Imogen Schon follows below.

In the UPR report, a majority of States raised serious concerns regarding Brunei’s adoption of the Syariah penal code[1]. We join this chorus. Those who comply with the code, and those who contravene it, are liable to suffer gross human rights violations.

Amongst other infringements, the Syariah penal code disregards Bruneians’ rights to freedom of religion and belief. Brunei’s constitution states that “all…religions may be practised in peace and harmony” [2]. This is not the case. Speaking freely about religious belief, and non-belief, is prohibited[3]. Non-Muslims cannot say ‘Allah’[4]. This may seem innocuous, but Bruneian Christians use ‘Allah’ where in English Christians say ‘God’[5]. Moreover, apostates will lose all rights to custody of children[6]. All this shows the lie that is the constitution’s claim of a life of ‘peace and harmony’ for non-Muslims.

The Syariah penal code threatens all Bruneians’ human rights, but women and children require particular mention. Women not wearing the hijab face up to 6 months in prison and/ or a $1600 fine[7]. If the government’s plans are realised, adulterers will be punished by stoning. Women, including victims of sexual violence and assault, are convicted disproportionately in Brunei’s adultery trials[8]. Finally, marital rape is permitted by the Syariah Code, an abhorrent situation and one which we call upon the government to change immediately.

The code deems children as young as seven criminally responsible, with punishments for minors including life imprisonment and corporal punishment. [9] This violates article 5 of the UDHR, as well as articles 3, 6, 37 and 40 of the UNCRC. We join Germany, Mexico and others in calling on Brunei to raise the age of criminal responsibility, and to prohibit the punishment of minors in this way. [10]