“Do not punch your critics.” Humanists defend free speech under attack

It has been a bad time for freedom of expression the past two weeks.

Last Friday, liberal Saudi writer Raif Badawi was assaulted by the first batch of 1,000 floggings, a sentence he was given last year, to be metered out over a torturous 20-week period, for the crime of “insulting Islam”. This apparently didn’t prevent the Saudi ambassador to France making an appearance on Sunday’s rally for free speech in Paris!

Yesterday. the Pope was widely quoted as having told reporters, in response to a question about  the Charlie Hebdo attacks, that words deemed to “insult” or “make fun” of religion should be outside the limits of free expression: “There is a limit… Every religion has its dignity. I cannot mock a religion that respects human life and the human person… If my good friend Dr. Gasparri says a curse word against my mother, he can expect a punch… It’s normal. You cannot provoke. You cannot insult the faith of others. You cannot make fun of the faith of others.”

In the aftermath of the massacre on the streets, at Charlie Hebdo‘s offices, and at a kosher supermarket in Paris last week, there has been an outpouring of solidarity, but also a great many commentators focusing on “limits” to freedom of expression or cautioning against “insult” to beliefs. 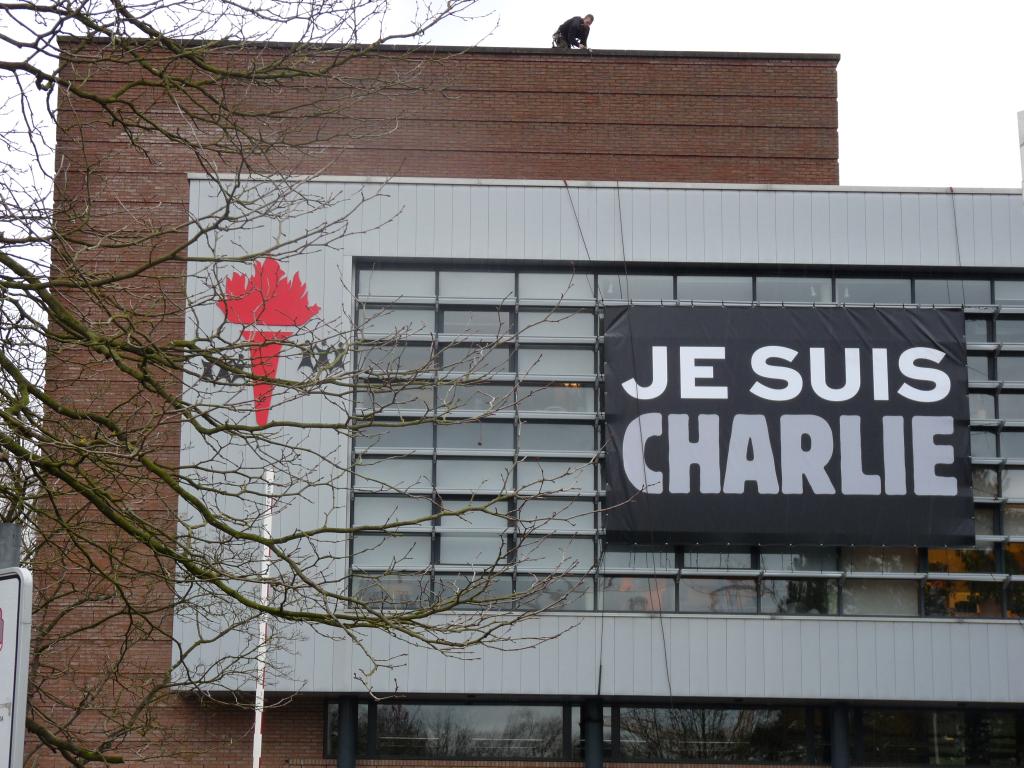 Offices of Centre d’Action Laïque and the European Humanist Federation, in Brussels

In contrast, humanist organizations in many countries have steadfastly restated their commitment to freedom of expression, to the value of open honest debate, and in particular to the value of humour, satire and even ridicule in such debate, as well as variously emphasising the need to live and debate peacefully together in society.

“This reference to punching someone, if it is a joke, is in poor taste. He says it is ‘normal’ to lash out if you are offended. He should instead be saying that if you feel like being violent, restrain yourself! Listen to what people are saying to you. Maybe try to explain your views again. If they are truly being malicious, then walk away. But do not punch your critics!

“In particular at this time, it is an atrocious message to send out, the idea that you should ‘expect‘ some violence if you offend someone. So-called insult to beliefs will happen in an open society; if we truly have free speech in any substantial way, then sometimes people will read things or hear things, even about their deeply held beliefs, which they do not want to hear. Then you can choose to turn away, or put the paper down, or talk to someone else. What you cannot do is ban criticism or put ‘insult’ to religion outside the limits of free speech, as the Pope suggests it should be. And you shouldn’t go around punching people whose contrary views upset you! Actually, I can’t believe I’m having to say this.”

Humanists united for freedom of expression

IHEU’s statement on the Charlie Hebdo attacks last week, said that “No person who genuinely recognises the humanity of their fellow citizens, or who is remotely interested in the good of society at large or for any section of society, could ever justify this terrorism. Reading words and seeing images that satirise your beliefs is as far removed from a warrant to murder as it is possible to get.”

IHEU Members and kindred organizations in many countries responded spontaneously in a show of unity and solidarity for the same values.

“…Our thoughts are with the Charlie Hedbo staff and their families.

“As an organization committed to defending freedom of speech, thought, and expression, the American Humanist Association strongly condemns these horrific acts of violence. Those who break the law to enforce religious codes must be brought to justice. Religion isn’t and shouldn’t be protected from criticism, and we will continue to stand with those who will defend our basic human right of free speech.”

“No words can adequately condemn the brutality of this disgusting attack. Our thoughts have of course been with the people of France throughout this truly terrifying ordeal.

“We must also be clear that the ones to blame here are the terrorist perpetrators. Those who cry out for further censorship of cartoonists and writers in the wake of tragedies like this will only embolden the murderous outrages of these criminals.

“The right to free expression is a universal one, and it lies at the foundation of our every liberty. It must always be defended.”

DeMens.nu (Belgium): (in a joint-statement from various belief and philosophical organisations):

“The atrocities in Paris constitute a direct attack on our universal human rights. We are deeply shocked and alarmed.

“The right to freedom of expression and press freedom are universal. They are the basis of all our freedoms were enshrined in the Universal Declaration of Human Rights. Human Beings have the freedom to think and act according to their own beliefs while respecting the other and respect for the dignity of others…

“We want to work together to build a tolerant humane society. We hope that our appeal will peacefully following in our society.”

“In the face of the horror and the hatred, we feel deeply saddened but also a profound anger.

“We strongly condemn this ferocious attack against freedom of expression and freedom at all and express our deep solidarity to those who continuously and bravely defended our core democratic values with their drawings and words.

“With all the defenders of democracy and fundamental liberties, we offer our sincere condolences to the relatives and families of the victims.

“Satirizing and mocking religion is sacred. In face of violence, we call everyone to use their words, drawings and voice to defeat obscurantism.”

“Tragedies such as these, that shock and confuse, can make easy answers attractive to us, in that they can lend themselves to stereotype and simplistic analysis. This is not the time for either of these.

“Instead, this is the time for two simple things: to express our sympathy to all who are affected, and second, to recognise that we are all affected, in that freedom of speech is a cornerstone of civilised society, and is slightly more under threat to us all in the wake of the Charlie Hedbo attack.”

“This is an attack on freedom of expression, freedom of thought and a right to life that are all universally recognized as fundamental human rights. … In Africa, we have always experienced similar attacks in Nigeria, Cameroon, Somalia, Kenya and Uganda among others.We have lost thousands of lives at the hands of people who claim to be ‘avenging’, killing others in the name of God or Allah and this has and continues to stifle freedom of thought, expression and belief. As an organisation, we have gone through such attacks and we totally feel and appreciate the pain all the victims of such attacks go through. We call upon all peace loving individuals, human rights defenders, defenders of civil liberties, political actors and state authorities through out the world and all international organisations and world bodies such as the United Nations to join hands in ending such attacks.

“…We are calling for peace not war, we are calling for life not death. It is being alive and having a peaceful environment that will enable the world be reasonable, be a good place to live on in this one life we have. We mourn with all the affected families and we hope that justice will be done.”

“The Humanist Association of Northern Ireland is horrified by the murderous attack committed on the offices of Charlie Hebdo, the French satirical newspaper. This barbaric act is a serious assault on democracy and freedom of expression. We wish to express our condolences to all the relatives of those killed and our solidarity with the staff of the newspaper”.

“The Humanist Canada Board of Directors shares the global rejection of extremist religious positions.

“The Humanist position remains steadfast in its support of critical thinking and dealing with alternate ideology in an inclusive manner, regardless of disagreement. Violence and disrespect have no place in our modern world.

“As the historic, cultural connection to a religious commitment declines around the world, Humanist Canada is ready to serve Canadians and the global community as they evolve to a secular, non-religious future.”

“We wish to express solidarity with the family and friends of those involved.

“The freedom to openly discuss and criticize ideas is crucial to liberal democracy, and any moves to censor or restrict those freedoms will only ever be counter-productive.

“The rights to freedom of thought and expression are fundamental, and we will resist all attempts to silence it through violence and intimidation.”

“These Islamic extremists do Muhammad a disservice by avenging satire of him. Who really makes a caricature of Islam, you might ask. They are out to sow fear and want to silence criticism and dissent. In response to such an attack on freedom of expression the only answer is: more satire, more jokes, more debate about Islam. Including by Muslims themselves.”

“The extremists try increasingly to terrorise us into silence and often the state conspires with them, blaming the victims for ‘bringing it upon themselves’.

“But in an open society, free expression is more important than any religious dogma. Without free expression, our democracy will not function, as it does not in many Muslim countries. Religion will be permitted to go unexamined, even when it is a threat to life and limb.

“We must stand together and refuse to be cowed into silence by the threats of terrorists and the cowardice of politicians. We cannot, as a society, place religion beyond the reach of satire or critical examination.”

“Humanists condemn Wednesday’s attack against the satirical magazine Charlie Hebdo in Paris… Our thoughts are with the victims’ families, friends and colleagues.

“…It should be obvious that religion just like everything else should be the subject of satire and exposed to criticism. Religions can never be permitted to remain out of reach of freedom of expression. Humanisterna invites all who cherish our democratic rights and freedoms to use their voices, drawings and words to resist all forces that are hostile to freedom.”

“This morning’s events are a direct attack on the fundamental values ​​of our society, to universal human rights… Muslim leaders have a duty to condemn what happened… though we must avoid falling into the trap of the narrative of a ‘clash of civilizations’. What really is urgent and necessary is that for societies to function successfully, we identify the principle of secularism as a guarantor of cohesion and freedom for all: majorities, minorities, and of course, as we remember the sad case today, journalists.”