Publish and be damned – Charlie Hebdo pledges to return

Following yesterday’s horrific attacks, the International Humanist and Ethical Union (IHEU) in solidarity with the campaign by Index on Censorship, PEN International, Reporters Without Borders, and other free speech advocates, is republishing a selected image from the magazine Charlie Hebdo. As the campaign states:

We believe that only through solidarity – in showing that we truly defend all those who exercise their right to speak freely – can we defeat those who would use violence to silence free speech. We ask media organisations, individuals and everyone who supports free speech to join together in this action.

Each publication will select a cartoon, a range of cartoons, or covers that they believe best reflect the right to free expression and publish at the same time globally. The idea is a moment of unity in which we show that together we stand up for journalism and the right to free speech, no matter what, and to show our support and respect for those killed on January 7. 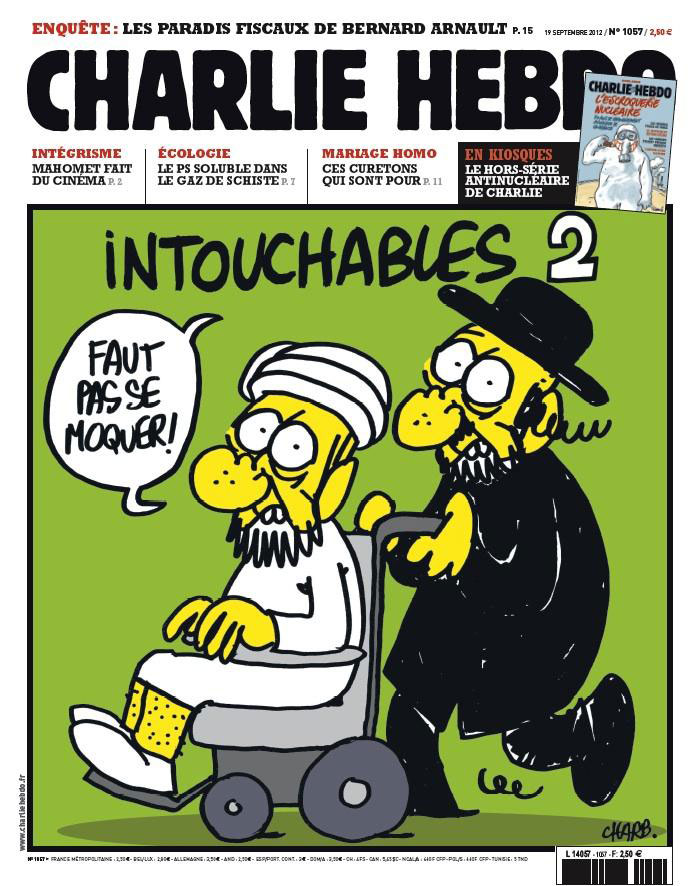 IHEU is publishing a cover image from September 2012 (right). With reference to the film The Untouchables, and in the aftermath of the “anti-Muhammad” Youtube clip Innocence of Muslims, which caused an overblown furore in 2012, the cover features cartoon religious stereotypes, the wheelchair-bound Muslim possibly representing Muhammad injured by the video, and satirising the impulse to shut down ridicule by griping, “Shouldn’t mock!” or “You mustn’t laugh!” It’s an image which speaks closely to the heart of the issue: the right to criticise and ridicule, as part of the right to free expression.

“All the time when we met we tried to make fun and joke about the crazy stupid people who were violent enough to be afraid of a simple cartoon… They can continue to be afraid, because there will be more cartoons.

“We have all decided, the journalists who survived and their ex-colleagues, that we are going to have a meeting tomorrow to publish the next Charlie Hebdo, because there is no way, even if they killed 10 of us, that the newspaper won’t be out next week.”

You can donate to the publication Charlie Hebdo via:
https://www.donspep.caissedesdepots.fr/?journal=CHAR