Humanist organizations have been among the chorus of human rights groups, activists, and governments internationally, calling for the release of persecuted Saudi liberal, Raif Badawi. With news that Raif received the first round of 1,000 lashes last Friday, the International Humanist and Ethical Union (IHEU) and many of our Member Organizations, have been among those rallying individuals on social media (IHEU’s most widely shared social ‘meme’ ever put pressure on King Abdullah to reverse the sentence) and elsewhere to highlight the gross injustice of his sentence.

There was news this morning that today’s planned flogging was delayed “on medical grounds”, which as Amnesty pointed out, only goes to “expose the utter brutality of this punishment” and “underlines its outrageous inhumanity. The notion that Raif Badawi must be allowed to heal so that he can suffer this cruel punishment again and again is macabre and outrageous. Flogging should not be carried out under any circumstances,” an Amnesty spokesperson said.

This evening it has been confirmed that Raif’s case has been referred back to the Supreme Court by the king’s office. [Update 19 January: Sources close to the case confirm that the Supreme Court referral in fact took place some weeks, not in the days after Raif was first flogged. This was widely misreported on Friday.] IHEU Communications Director, Bob Churchill, said:

“The medical postponement was better than nothing, but very difficult to assess in terms of the direction or intentions of the authorities. It may have been entirely non-political. The news that his case is to be ‘reviewed’ though is — I say this very cautiously — a sign for hope: it means hope that the highest authorities in the country are hearing the voices of concern from around the world and acting to reverse this unjust decision. But it is no cause yet to celebrate. Raif Badawi remains in prison, must be in great pain, and is living under constant threat of further floggings very soon.

“So this is a very cautious welcome for a very tentative sign of hope. We hope that the Supreme Court review will take into account the fundamental human rights objections: that the crime itself was in fact merely exercise of entirely legitimate free expression, the charge of “insulting Islam” is neither legitimate nor accurate, and that the flogging sentence is needlessly cruel and constitutes torture. We must remain vigilant and hear Raif’s family, local supporters and fellow human rights advocates, who believe international pressure is essential to achieving true justice in his case.” 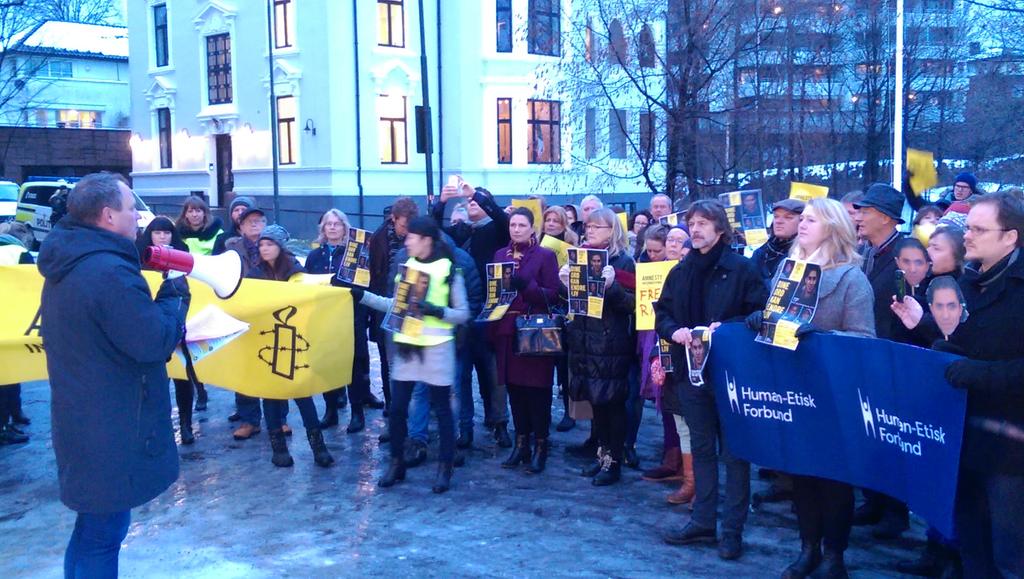 Humanist and human rights groups in many cities have protested at Saudi embassies in the past few weeks.

This morning the Norwegian Humanist Association (NHA) and Amnesty protested in Oslo. Chair of the NHA, Tom Hedalen, addressed the crowd.

His speech follows below in English translation:

Most people are not actually Charlie. Being Charlie is to challenge the limits of freedom of speech.

– To break down boundaries.

– To stand up for what you believe, regardless of danger to your own life and health.

– To uncompromisingly follow your own ideals and values and to be a role model for all others who seek integrity and holding to their principles.

In some parts of the world, we are able to deliver biting satire and confrontational rhetoric to “be Charlie”. Elsewhere, to be Charlie one must first make a stand for freedom of expression in principle. Saudi Arabia is one such place!

While that country has attempted to condemn terror in Paris as an attack on free expression, the state also punishes the blogger Raif Badawi with imprisonment and repeated floggings, for writing about free speech itself.

Risking his own life and health, he has challenged the limits of what is accepted in Saudi Arabia. He has stood up for freedom of speech and pays now price…

Authorities in Saudi Arabia believes Badawi has insulted Islam and that he therefore must be punished. The thinking behind this stems from the same ideology as those behind the terrorist attacks in Paris. Both concern resorting to physical violence against anyone who violates their interpretation of Islam.

We can never accept that religious forces should determine a framework for disallowing expression on certain topics.

People who of their own free will follow a religion are free to live their lives as they want, but we can never accept the requirement that those rules must also apply to all the rest of us – particularly in terms of free expression.

The religious requirements of extreme groups are bad enough. They are especially daunting, however, when it is not just an extremist organization, but a state that is the bearer of this hostile ideology.

Norwegian politicians have been crystal clear regarding the attack on freedom of speech we saw in Paris last week. They have also endeavoured to improve cooperation with Saudi Arabia in recent years. Principles are only principles if they apply regardless. They have met with rich oil states. Yet the principles that apply in the condemnation of IS, or to terrorist attacks in Paris or to Boko Haram, certainly also apply to Saudi Arabia.

We are all Badawi. Badawi is freedom of speech. Badawi is democracy and Badawi is the just state with rule of law [rettsstat].

There is no excuse for lashing Raif Badawi. Free Badawi!