The Co-President of the European Parliamentary Intergroup on Freedom of Religion or Belief and Religious Tolerance has called for greater recognition of the rights of the non-religious under “freedom of religion or belief”, which are increasingly violated by many states. 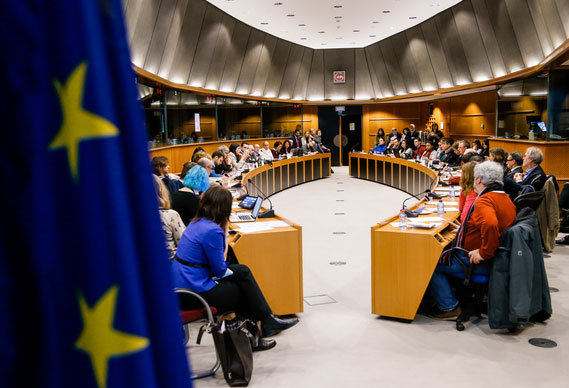 A meeting of the Intergroup on FORB and RT

The Intergroup is a cross-party group of MEPs who support and promote Article 18 rights in the European Union’s “external actions” (internationally outside the EU). The letter was written with input from the International Humanist and Ethical Union (IHEU) and the European Humanist Federation (EHF) and cites the IHEU Freedom of Thought Report as a major source of evidence.

The letter to Federica Mogherini, High Representative of the European Union for Foreign Affairs and Security Policy and Vice-President of the European Commission, was a response to growing hostility to the non-religious and an appeal to the EU to promote the rights of non-religious believers in the world.

The letter (available as a PDF from the Intergroup website) further makes specific practical recommendations, including that the High Representative should look to implementing the 2013 EU Guidelines on Freedom of Religion or Belief, and working with the few organised groups representing non-religious persons including IHEU.

“We truly welcome this initiative by the Intergroup. It is not just welcome, but essential, that the institutions of Europe, as well as international human rights instruments, assert positively the rights of atheists, humanists and those who simply have no religion. We must be allowed to express dissent from religion and to assert our own values and worldview, without fear of being marginalised or suppressed by the state. Non-religion must not be regarded as secondary to specifically “religious freedom”. Freedom of thought, conscience, or religion is one and the same right for all.”

“I would like to thank the Intergroup for its commitment to the rights of all believers and nonbelievers in the world. I would also like to stress that the abolishment of blasphemy laws within EU member states themselves would ensure more coherent and efficient EU external and internal policies on this issue.”