On Saturday afternoon a gunman targeted a blasphemy seminar at a cafe in Copenhagen, Denmark. Despite significant security measures already in place, the gunman killed one man in his forties, and injured several police officers. The probable main target appears to have been cartoonist Lars Vilks from Sweden, whose cartoons depicting Muhammad with the body of a dog have previously sparked debate (as intended); the French ambassador to Denmark, and a Femen activist were also present but survived. The participants reportedly continued with the meeting in a show of defiance, despite the killer fleeing and remaining at large. 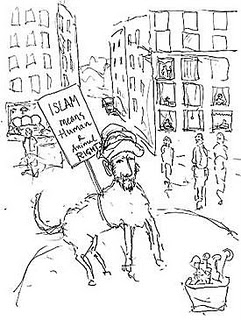 One of Lars Vilks’ “Modoggie” cartoons, a potential target of the attacks in Copenhagen that have left two victims and the gunman dead

Shortly after midnight there was a further attack, on a synagogue in central Copenhagen, police believe by the same lone gunman. A young man who reportedly had been acting as a door guard, was shot repeatedly and killed.

Police later saw the suspected perpetrator at an address under surveillance, and after he opened fire on police, he was killed.

“These shootings are a senseless, tragic act of hatred. It must be condemned without any equivocation, without any quibbles, without offering any excuses for violence on the basis of alleged “insult”.

“Unfortunately we saw all such pathetic responses after the Charlie Hebdo massacre. There were those calling for new international blasphemy laws, and there were those falling back to proclamations that cartoonists should expect or even to blame for murderous rampages! But the Copenhagen cafe shooting shows that the terroristic impulse to kill is broad. Even to meet for a discussion about “blasphemy” itself is deemed a sufficient reason to riddle the venue with bullets and take lives, according to this gunman.

“And, as in the Paris attacks, the next target is: arbitrary Jews. With utmost clarity this gives the lie to the notion that killings such as this are simply a personal response to a deeply felt offence, as with the infamous example of hearing an insult against one’s mother. No. These are premeditated crimes of hatred, calculated to deter free expression about religion, yes, and acts of wanton hatred in their own right, intended to exhibit hate and to stoke more hate.

“Let us be clear: There can be no policing of mere offence to religion without shutting down free expression. Surrendering into silence under threat of murder is not going to happen in Europe. The terrorists’ aim, to respond to ridicule with rampage, in the hope others will respond to rampage with silence, or with an equal hatred, will fail. We must hope, also, that terrorists will fail to turn communities against one another, as they clearly intend. What does that leave them, then? They achieve only murder, which any coward can accomplish.

“There is no good, easy answer here. Easy, extreme answers are to shut down any expression on Islam that Islamist gunmen might claim to find offensive, a recipe for silence and betrayal of every other value; or in the other direction, to foster anti-Muslim bigotry, which the terrorists appear to want, and is even more repugnant than silencing free speech about religion. There is only the difficult answer, bringing no immediate resolution, but the only right way: To live, and defend, the values of the open society. The participants at the Krudttønden cafe proceeded with their meeting after the shooting. Yes, the right and brave thing to do is simply this: continue.”