At UN, IHEU raises issue of hate campaigns against those with no religion

In a written statement to the UN Human Rights Council, the International Humanist and Ethical Union (IHEU) has raised concerns about hate campaigns against those with no religion around the world. 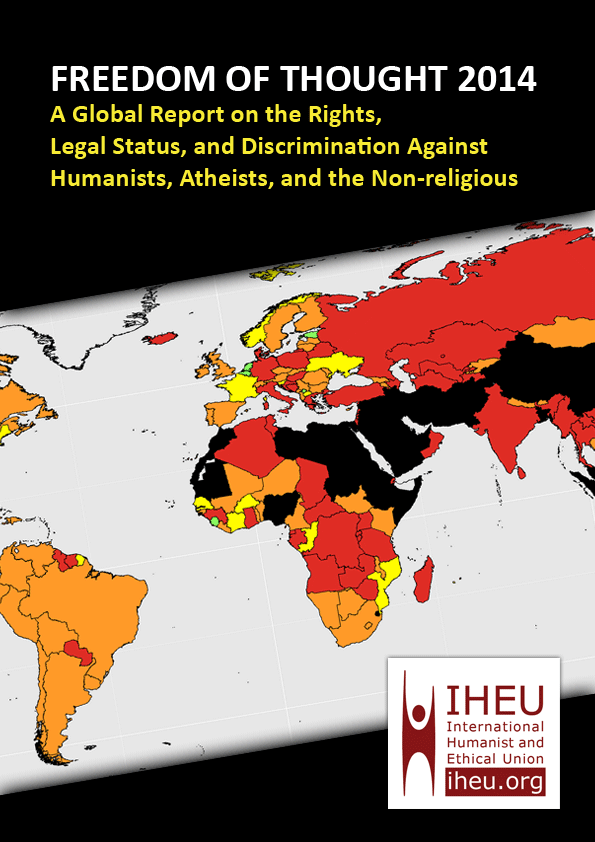 The latest edition of the IHEU Freedom of Thought Report, published December 2014, examined issues of non-religious discrimination and persecution in countries around the world

Based on the findings of its Freedom of Thought Report 2014, IHEU highlighted the surge over the past year in ‘hate campaigns’ and incitement to violence against those with no religion coming from vigilante actors and political leaders themselves – including heads of state.

In January, Saudi Arabia enacted a new law equating “atheism” with “terrorism”; in May, the Malaysian Prime Minister branded “humanism and secularism as well as liberalism” as “deviant” and a threat to Islam and the Malaysian state itself; and a month later, in Egypt the authorities carried out an organized backlash against young atheists, with a campaign to spread awareness of “the dangers of atheism” and why it is “a threat to society”.

In its statement, IHEU argued that it beggars belief that there are some state-leaders who are not only failing their irreligious population by not protecting them as they are obliged to do under international law, but are actually complicit in creating a climate in which acts of violence against them happen.

It is also noted that non-believers as a minority are far from alone in suffering persecution and violence from state and non-state actors – there are countless examples of other groups suffering horrifically in the same way – but that the statement’s focus on those with no religion was because others have not raised the issue. The non-religious are a group often forgotten by those concerned with “religious freedom”; a group too often wrongly assumed to be immoral or amoral, and deprived of human rights.

IHEU called on members of the Human Rights Council to condemn those country leaders who use incitement against any religious or belief minority, and argues that concrete action must be taken to implement the Rabat Plan of Action, which seeks to prevent incitement to discrimination, hostility and violence whilst protecting free speech.