As many as 19 victims have been killed in a terror attack at the Bardo Museum, next to the parliament building in Tunis, today. 17 foreign tourists and  2 Tunisians were shot dead, before two gunmen were killed in security operations. The foreign nationals reportedly include victims from Italy, Germany, Poland, Spain, and possibly the United Kingdom.

Tunisia’s prime minister has said, “All Tunisians should be united after this attack which was aimed at destroying the Tunisian economy”.

Social media accounts associated with ISIS have claimed responsibility for the attack, explicitly stating that it was an operating designed to disrupt tourism and mark the beginning a wave of further attacks in Tunisia. 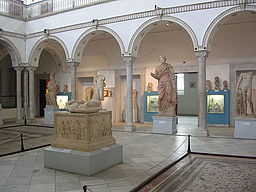 The Carthage Room at the Bardo Museum, Tunis

“After so much violence conducted by ISIS and their sympathisers and imitators, both in Iraq and Syria, in Nigeria, and recently in Paris and Copenhagen, as well as the recent destruction by ISIS of the cultural inheritance of Erbil, Khorsabad, Mosul and beyond, we must ensure that we do not become numbed to reports of such outrages. Jihadists want attention – and to provoke terror – however, we must neither overreact and be terrorized, nor accept attacks such as these as a ‘new normal’. They are not normal, nor to be expected, nor justifiable responses to any set of circumstances.

“Our thoughts are with the Tunisian people and the families and friends of all those killed in today’s heinous and wasteful violence.”

“This deadly attack, which in itself is utterly deplorable, must not be allowed to derail what many regard as the region’s most successful transition from authoritarianism to the rule of law and respect for human rights… The best answer to this atrocity would be bringing those responsible to justice in fair trials. A return to the draconian measures of the Ben Ali years which trample over human rights would compound the tragedy of this crime and is likely to play into the hands of those trying to undermine Tunisia’s transition.”