In a statement to the UN Human Rights Council, the International Humanist and Ethical Union (IHEU) has raised its concerns about the inconsistent and hypocritical ways some state leaders and officials profess support for the right to freedom of expression, whilst denying such rights to people in their own countries. 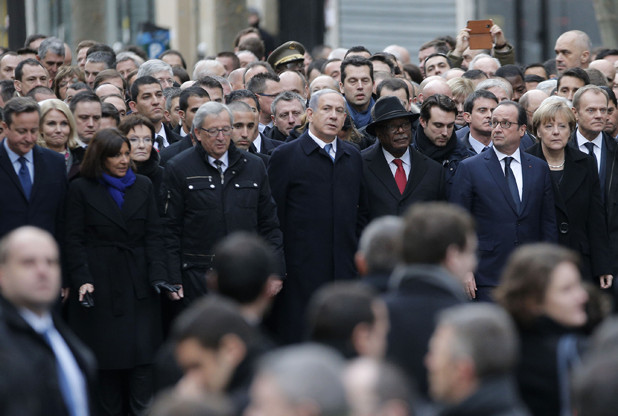 World Leaders at the Free Speech Rally in Paris, January 2015

Whilst this hypocrisy is evident in international fora, such as at the Council itself, we argued it was particularly highlighted by the spectacle of seeing leaders from countries such as Egypt, Turkey, Russia, Algeria, United Arab Emirates and Gabon marching for free speech in Paris, in the wake of the Charlie Hebdo killings.

According to Reporters without Borders’ Annual Press Freedom Index, Egypt is ranked 159th out of 180 countries in the index, Turkey 154th, Russia 148th, Algeria 121st, the United Arab Emirates 118th and Gabon 98th.

The IHEU also raised the inconsistencies on the right to free expression that exist in many EU member states’ policies – currently, 13 EU countries have laws outlawing blasphemy, or the similar offence of ‘religious insult’. As reported by us, Denmark used this March session of Human Rights Council to announce its intention to retain its anti-blasphemy law.

We called for an end to the empty rhetoric and hypocrisy on the issue of free expression, particularly in the area of expression on religion or belief. We argued that it seems free speech is easy to support when it’s a vague and theoretical concept; but it must also be upheld when it means allowing people to dissent, mock beliefs, or criticise regimes – and this is precisely where it matters most.

Our statement was delivered by Hannah Bock and follows below in full:

Despite this, over the past few months we have witnessed inconsistencies and hypocrisy when it comes to free expression in the context of religious belief, as personified by those state leaders who jumped at the chance in January to march in the Parisian limelight for the right to free speech, only to maintain laws criminalising blasphemy and offensive expression at home.

Notably such types of laws have all too often been applied selectively; punishing and silencing dissenting or unpopular viewpoints, with the first victims of such violations being those giving voice to independent thought.

Examples of this throughout the world abound; in India and Pakistan, blasphemy laws are often used to persecute those from minority communities, and just a couple of weeks ago in Russia, it was announced that the Russian Orthodox Church is suing a theatre director for directing an opera that “offends the feelings of believers”.

Within the EU too, inconsistencies exist; despite its excellent guidelines on freedom of religion or belief, which note that no religion or belief should be guaranteed protection from criticism or ridicule, there are 13 member states with laws relating to blasphemy, or to the similar offence of ‘religious insult’.

There needs to be an end to inconsistencies, empty rhetoric and hypocrisy on free expression in the context of freedom of religion or belief. Instead, a clear commitment must be made; and that must start with this Council. A good place would be through strengthening consensus around resolution 16/18 and Rabat, whilst ensuring the Istanbul process is not sabotaged by those Council Members set on stalling the Plan of Action.