“Breaking through with reason and Humanism” was the theme of PATASCon, the conference of the Philippines Atheists and Agnostics Society (PATAS), held today in Manila, and sponsored among others by the International Humanist and Ethical Union (IHEU). The Philippines is a predominantly Catholic country, and this was PATAS’s second atheist and agnostic conference.

The conference was introduced by outgoing IHEU president Sonja Eggerickx, and Tess Termulo, president of PATAS, who spoke on themes that were echoed throughout the day, with many speakers discussing the need to be bold and speak out as atheists in the Philippines, especially because relative to the region there are so many rights and freedoms, despite the sometimes religiously oppressive social background. The harm caused by church influence on politics and Catholic moral teaching in Philippines was another recurring topic. 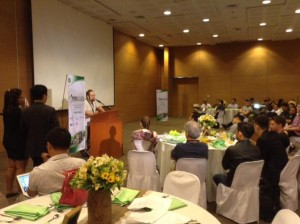 Speakers included Eric Julian Manalastas, professor of psychology specialising in LGBT psychology, who spoke about the importance of understanding and the threat of stigma to sexual minorities; Willie Poh Kaw Lik who spoke on the distinction between learning and education; and Bob Churchill of IHEU who spoke on the failings and dangers of “blasphemy” laws, and the work of IHEU and the End Blasphemy Laws campaign in favour of free expression, and Rodion Herrera on the importance of scientific literacy.

PATAS screened the following film about their important medical work.