An important message from our friends and members, the Society for Humanism (SOCH) Nepal. 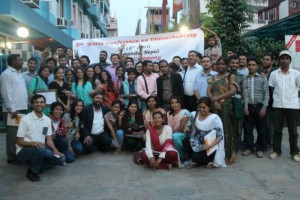 SOCH Nepal members mark the World Conference on Untouchability in 2014, supported by IHEU

A devastating earthquake of magnitude 7.9 has killed more then 7000 people in Nepal (an estimate being revised upwards almost every day) and more than 200,000 people are seriously injured. The United Nations has said the earthquake has directly affected more then 8 million people.

As the citizens of one of the poorest countries in the world, Nepali people are not able to reconstruct lost property by their own effort. The damage has been most severe in remote mountainous regions of the country.

Currently, about 90 percent of the population in affected areas are living without medical treatment, food or shelter, despite rain and cold. Pregnant women and children are mostly affected. The monsoon season is approaching very soon in Nepal. People won’t be able to rebuild their houses before monsoon. They will need a shelter to live for some months.

As a social organization, Society for Humanism (SOCH) Nepal has started to support needy people for shelter and food by mobilizing more then one thousand volunteers throughout nation.

We appeal to our national and international friends to support us on following account to assist victims.

Your donation will be used for food and shelter for victims.

The International Humanist and Ethical Union (IHEU) is collecting online donations as an intermediary to support SOCH Nepal in their earthquake relief work. All funds received via this facility will be donated directly to SOCH Nepal.

[The appeal has now ended and the Donation button has been removed.]

Society for Humanism (SOCH) Nepal can be contacted via:
www.sochnepal.org
[email protected]