At the 29th session of the Human Rights Council, the High Commissioner for Human Rights, Zeid Ra’ad Al Hussein, presented a report on discrimination and violence against people on the basis of their sexual orientation or identity. In it, he detailed the ways in which LGBT people are subjected to violence, persecution and discrimination and set out a number of recommendations to improve the human rights situation for LGBT people. 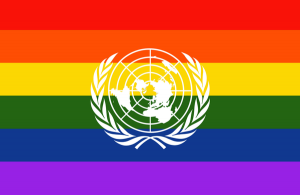 When the report was debated, a number of states, including those belonging to the Organisation of Islamic Cooperation (OIC) and Gulf Cooperation Council, opposed the subject of the report entirely arguing that it talked about non-universal issues.

Saudi Arabia stated its support for human rights instruments, but only in accordance with the Islamic Sharia. It accused the High Commissioner’s report of having no respect for the right of others to live their lives in “accordance with their own cultural and religious specificities.” The Saudi Arabian Ambassador said, “we do not support this thing of homosexuality,” arguing that the recommendations in the High Commissioner’s report on preventing discrimination and violence against LGBT people constitutes a violation of Saudi’s sovereign right.

Nigeria was particularly vocal in its opposition to the High Commissioner’s report, emphatically rejecting it. The Nigerian Ambassador noted that Nigeria rejects unreservedly same-sex marriage, lesbians and gays in its population. He argued that gay rights “limit population” and that Nigeria has a “duty to protect family values, religious and cultural values, which are the bedrock of society”. He concluded by stating Nigeria’s “abhorence of LGBT rights,” recommending that they be condemned by Human Rights Council.

Qatar, on behalf of the Gulf Cooperation Council, argued that LGBT practices go against Sharia Law.

In response, the International Humanist and Ethical Union (IHEU) made a statement to the Council to put on record our dismay at the stated views, arguing that they blatantly contradict these states’ claims that they support the universality of Human Rights. We argued that where LGBT practices do not accord with Sharia law human rights must always prevail.

During the same debate, the IHEU also co-sponsored, along with a number of other NGOs, a statement by the International Lesbian, Gay, Bisexual, Trans and Intersex Association (ILGA) which called on the Council to end violence against LGBT people.

We welcome the statement by the High Commissioner [A/HRC/29/23] on discrimination or violence against people on the basis of their sexual orientation or identity. But we were dismayed at the opposition expressed by the representative of the Organisation of Islamic Cooperation (OIC) and by several other States to any discussion of this issue[1], claiming inter alia that the statement by the High Commissioner went beyond his mandate.  We object most strongly to the idea that discussion of the human rights of anyone should be off limits in this Council or that they should for any reason be denied the full protection of their human rights.

Some speakers questioned why this group was being singled out for special consideration. The answer of course is that – like people with albinism who have also been singled out – LGBT people are suffering widespread persecution and discrimination.

The spurious argument that there is no agreement within this Council regarding LGBT rights brings no credit to the OIC and its allies. It is a tacit admission that, despite its claims to the contrary, the Islamic states do not accept the universality of human rights.

The Gulf Cooperation Council representative stated that LGBT practices do not accord with Sharia law[2]…. But, Mr President, this Council was not created for the promotion and protection of Sharia law but for the promotion and protection of human rights.  If there is any conflict between the two then surely – in this Council above all – human rights must prevail.

[1] These statements were expressed during the General Debate on Item 2/3, 22nd June 2015 – by, for example, the OIC countries, the Gulf Cooperation Council countries, Saudi Arabia, and Nigeria.