Guatemalan Humanists resist bill that would force religion into all schools

Humanists are pushing back against a proposed law in Guatemala that would require religious teaching in all schools, public or private, with a “literal” Biblical interpretation. 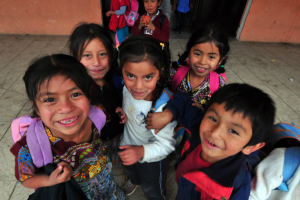 The Guatemalan Humanist Association (AGHS, Asociación Guatemalteca de Humanistas Seculares) is leading the fight back. At a public meeting addressing the bill in Congress the AGHS representative Carlos Mendoza was booed out (video), having barely been able to put his case, namely that the bill violates the National Education Act and the Act on the Integrity of Children and Adolescents, which ensures that the education in the country should be secular. The meeting was stacked with religious representatives, with other human rights, secular and sexual equality groups “actively excluded and denied access to the event”, AGHS told IHEU. Mendoza gained access to the meeting during a protest against the bill outside Congress organized by the Humanist association.

The AGHS launched last year with support from humanists internationally, including the International Humanist and Ethical Union (IHEU). Dan Barker, co-president of the Freedom From Religion Foundation in the US, and a keynote speaker at the AGHS 2014 inaugural conference, this week called Carlos Mendoza a “humanist hero” for the Congress intervention.

The AGHS have launched a campaign against the bill and to keep education secular at Indiegogo:

AGHS have been countering the bill through public lobbying and protest events, and are considering legal action. A spokesperson told IHEU, “Today they presented the bill, so we organised a protest outside Congress, and one of our members managed to sneek in the presentation… He (Carlos Mendoza) bravely… started arguing against the bill, which sparked a heated and intolerant reaction from the various pastors and evangelicals that were invited to the presentation. … This bill cannot pass, we will oppose it with all our strength!”

In a public statement, AGHS argues: “The imposition of Bible reading in all public, private and cooperative schools at all levels is an arbitrary measure based specifically on the religious beliefs of proponents and an alleged “divine revelation” of one of them ; not for the common good of all citizens. Far from creating unity and positive staff and general reforms, [the bill] could generate intolerance, division, disputes and conflicts between students, teachers, administrators and parents .”

AGHS Vicepresident Oscar Pineda told IHEU: “The proposed bill presented to Congress last Wednesday aims to force all schools in Guatemala, both public and private, to teach a weekly “Biblical Values” class. All students, regardless of their religious beliefs, are required to attend and obtain a passing grade. Effectively violating the right to religious freedom and freedom of conscience, and eliminating every option for parents that want their children to get a strictly secular education. If this bill passes, all education in Guatemala will have a religious element, based on a “literal and grammatical” interpretation of a particular Protestant version of the Christian Bible. If this isn’t a flagrant enough violation to religious freedom, freedom of conscience and to the separation of Church and State, the bill states that Government must allocate resources to pay for all this in the National Budget.”

The IHEU’s Director of Communications, Bob Churchill, commented: “Democracy is not about enforcing a majority view. We must rate democracies by their treatment of minority positions, by their respect for individual human rights, and this includes the rights of the child to a broad education, allowing them to explore and develop their own view of the world for themselves. The current education proposals are regressive, undermining the freedom of thought and belief of children, and reducing equality of access to education for non-religious and minority religious families.” 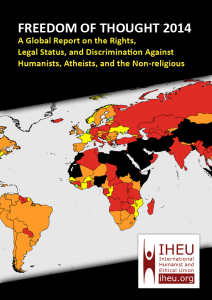 Guatemala was rated as having some “Systemic Discrimination” in the 2014 IHEU Freedom of Thought Report, in part for meeting the condition: “State-funded schools offer religious instruction with no secular or humanist alternative, but it is optional”.

Bob Churchill commented, “If this bill went through then the religious instruction would be more dogmatic, more narrowly-defined, and it would no longer be optional. Therefore Guatemala would be given a ‘Serious Discrimination’ rating for further compromising its mainly secular constitution and for narrowing the inclusivity of its public education system. Education must not be a tool for religious recruitment.”

You can donate to support the AGHS campaign via Indiegogo.