In the past few days the International Humanist and Ethical Union (IHEU) has written to senior figures in Nigeria urging them to pardon and release nine members of the Sufi Tijaniya minority sect who were accused of “blasphemy” and sentenced to death last Thursday.

In the open letter (below), IHEU and the Nigerian Humanist Movement raised a series of objections to the sentencing on human rights grounds, both against the charge of “blasphemy” and the death sentence in principle, as well as highlighting the particular circumstances of the case that constituted a violation of the right to a fair trial. 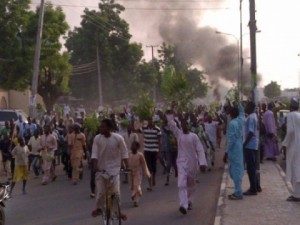 “Blasphemy” protests in Kano in May

The condemned men were arrested following accusations in May that their religious celebrations honouring the founder of their sect were “blasphemous”, prompting riots in Kano, with a large number of Muslim men rallying against the accused and setting fire to a building.

With no regard for international standards of due process the head of Kano state’s Islamic religious police said after the mob violence, “We quickly put them on trial to avoid bloodshed because people were very angry and trying to take law into their hands.”

An Upper Sharia Court has subsequently upheld the convictions and parts of the Kano population are said to be “jubilant” at the verdict. However, today the hashtag #SaveKanoNine is trending on Twitter in Nigeria.

The open letter from IHEU follows in full below:

We are writing from the International Humanist and Ethical Union, a human rights advocacy organisation accredited as an NGO at the United Nations Human Rights Council. We write to express our distress and deepest concerns over the death sentences reportedly handed down to nine individuals in Kano state this week. Our concerns include the following:

We are appalled that a death sentence should be considered a legally enforceable punishment in any circumstance. In this case where the “offence” committed appears to be little more than the expression of a minority religious belief, the death sentence is particularly disproportionate and constitutes an egregious violation of the right to life.

We object fundamentally to the notion that “blasphemy” is treated as a criminal offence. The UN Special Rapporteur on Freedom of Religion or Belief and numerous other bodies and experts, have repeatedly called for the abolition or repeal of laws prohibiting “blasphemy”, which in practice criminalize the expression of religious beliefs. The fact that some religious ideas conflict with other religious ideas, or cause offense to other religious believers, is no reason to curtail the right to freedom of religion or belief, and to freedom of expression, and yet under the Sharia courts’ “blasphemy” prohibition, both these human rights are clearly being violated.

We understand that Abdul Inyas, Hajiya Mairo Ibrahim, and the other seven convicted of blasphemy this week are all of the centuries-old Sufi Tijjaniyya sect, whose annual Maulud ceremonies are sometimes regarded as blasphemous or provocative by other Muslims who perceive the sect as elevating Tijjaniyya religious figures above the status of the Prophet Muhammad. Reliable local reports of the mob violence surrounding the initial arrest of Abdul Inyas, and of ongoing threats of violence should Abdul Inyas and his co-accused have been acquitted, constitute serious pressure on the judiciary and raise the most severe doubts about both the decision to prosecute, and the trial itself. The trial was conducted in secret, with no transparency, many of the names of the co-accused not released, nor the name of the judge. The initial and ongoing threat of violence and the closed nature of the trial, the obscurity around the exact nature of the charge, and the doctrinal basis of the court, lead us to conclude that the right to a fair trial has been violated.

Our understanding is that federal intervention, citing the constitution (Section 38, subsection 1) which is superior to any court, could enable these horrendous and illiberal convictions to be lawfully overturned in a civil court. We urge you all to do whatever you can to seek true justice, respecting and restoring the human rights of those accused, and to work to end the malicious and unjust use of “blasphemy” as a criminal prohibition anywhere in Nigeria.

Andrew Copson,
President of the International Humanist and Ethical Union

The International Humanist and Ethical Union is a founding partner in the End Blasphemy Laws campaign.