In the wake of the white supremacist killing of nine African-Americans in Charleston, and the fatal shootings of four unarmed black men -Trayvon Martin, Michael Brown, Tamir Rice and Eric Garner, in most cases by police – the International Humanist and Ethical Union (IHEU) has highlighted, at the UN, the issue of systemic racism in the American criminal and justice system. 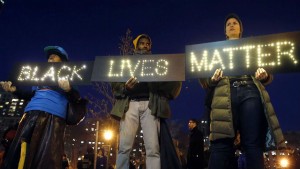 Protesters after the police killing of Eric Garner

Talking during a discussion on racism at the UN Human Rights Council, Elizabeth O’Casey raised the IHEU’s concerns about police brutality, lax gun controls and racial injustice in the United States – describing them as “trends which have entrenched a potent and lethal threat to human rights and equality.”

She urged the US government to take the institutionalised racism in its criminal justice system far more seriously and “to make decisive and wide-ranging reforms aimed at reducing the easy availability of guns.”

Our statement follows below in full:

A crisis of institutionalised racism is being exposed in the United States. Statistics show that on average black youths are shot dead by white police officers almost twice a week, and that those black Americans killed by police are more than twice as likely to be under age 21, compared to white Americans. Furthermore, when lethal police shootings (caught on camera) show the deceased to be unarmed and the death prima facie unwarranted, still few of the perpetrators are found guilty.

In one recent case, a police officer who shot an unarmed black couple 49 times through the windscreen of their car was acquitted on the grounds that it could not be ascertained whether his bullets or those fired by 12 other police officers had actually killed the victims. In a case in August last year, a police officer shot dead an unarmed black youth who was listening to music. The guilty officer was not charged because he was said to have “reasonably perceived a threat”.  The victim had been wearing headphones and walking away from the police officer.

The extremely relaxed gun control laws in the United States have created the most well-armed country in the world, with around 10,000 shooting homicides a year – a rate exceeding almost every country outside war zones – and the victims of shooting are disproportionately black.

Incarceration rates tell a similar story of deep-rooted racial inequality and discrimination. According to recent data more than a third of all black male high-school drop-outs are currently incarcerated.

We thank the US Ambassador for his comments during this debate but urge his government to take far more seriously the institutionalised racism in its criminal justice system and to make decisive and wide-ranging reforms aimed at reducing the easy availability of guns – often at the most extreme in the states with the worst histories of racial violence and prejudice – trends which have entrenched a potent and lethal threat to human rights and equality.