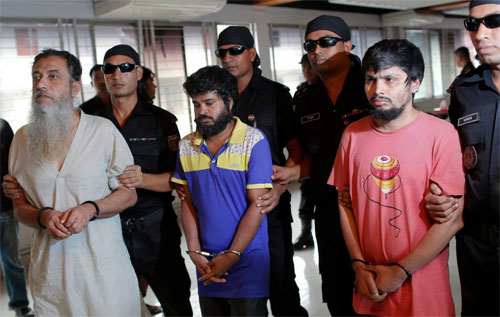 The International Humanist and Ethical Union (IHEU) is urging caution and some skepticism in reacting to reportage on the process of justice in Bangladesh.

A further arrest has been in connection with two of the Bangladeshi blogger murders in 2015, according to reports. Touhidur Rahman, 58, was said to have “told” police he was a British citizen, and it has established in a press conference in Bangladesh in the past few hours that he had dual British and Bangladeshi citizenship. He was reportedly arrested alongside two “active members” of Ansarullah Bangla Team, named as Sadek Ali, Aminul Mollick.

The IHEU has previously urged caution regarding information coming from Bangladesh media and authorities on the killings. Any genuine progress is of course to be welcomed, and arrests based on good evidence should be followed by fair trials; however the IHEU remains cautious as to the nature of the disparate are long-awaited arrests. It should be noted that:

The burden is on the Bangladeshi authorities to demonstrate, fairly and lawfully, that any of these arrests is credible and justiciable.

Responding to the news, Andrew Copson, President of the International Humanist and Ethical Union (IHEU), said: “If there is sound evidence that these individuals, including a Briton, are responsible for the brutal, mindless murders of Avijit and Ananta then they must face trial and justice without delay. Humanists are living in a culture of fear and intimidation in Bangladesh, certain that more lives will be taken simply for expressing a view opposing the Islamists.

“The Bangladeshi Government must do more to protect all its citizens from brutal fundamentalist thugs who would kill another human being for daring to think outside the confines of dogmatic religion. If it is true that a Briton is responsible, then it is clear that the UK government must also do more to combat any culture of impunity developing here for Islamists operating globally and visiting their violence on the humanist citizens of other states.”

[This article was updated 27 August, to make the emphasis of the story clear with a new opening sentence.]