The International Humanist and Ethical Union (IHEU) has highlighted the increasingly grave situation for civil society in Russia, including for one of its member organisations, the Russian Humanist Society. 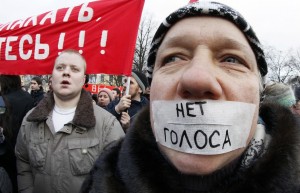 In an address to the UN Human Rights Council, IHEU representative Roy Brown drew on a written statement the IHEU had submitted to the UN ahead of the September session. In both statements, the IHEU described the pressure on civil society in the country, which has intensified considerably over the past few years and goes against all understanding of the right to freedom of expression and freedom of peaceful assembly.

The government intimidates and harasses NGOs by claiming that protest movements are foreign conspiracies, and requiring that any NGO engaging in political activity and in receipt of any funding from abroad should register as a “foreign agent”. As a result many NGOs have been forced to close.

This comes in conjunction with attempts by Russia at the Human Rights Council to promote anti-universalism, an anti-LGBT and ant-woman agenda.

The IHEU urged the Council to offer explicit support to civil society in Russia, and called on the government of Russia to cease its harassment of NGOs and start complying with its obligations under international law.

Repression of Civil Society in the Russian Federation

We wish to draw attention to our written statement [A/HRC30/NGO/39] which details government repression of civil society organisations in the Russian Federation.

Pressure on civil society in Russia has intensified considerably since legitimate anti-government protests against electoral fraud began in 2011. The government response has been to claim that protest movements are foreign conspiracies, and to require any NGO that engages in political activity and receives any funding from abroad to register as a foreign agent. ‘Political activity’ is deemed to include any protest against official actions, proposing improvements in legislation, or even participating in educational events. Failure to register as a foreign agent can lead to a fine of 300,000 rubles.

The effect of designating an organization as a foreign agent (equivalent in the public mind to “spy”) is to isolate it morally and socially. As a result many NGOs have been forced to close
or suspend programs, including in education, as happened with the foundation “Dynasty”.

In May the government adopted an enabling law to ban the activities and freeze the assets of foreign and international NGOs deemed “undesirable in Russia”. Twelve foreign NGOs, most of which are involved in humanitarian projects and engaged in protection of human rights, have fallen under this label and some of them have already announced the closure of their offices in Russia.

These actions of the Russian Government run counter to its obligations under the ICCPR and numerous Council and General Assembly resolutions.[1]

We urge the Council to express unequivocal support for Russian civil society, and we call upon Russia to end its campaign of intimidation against NGOs, and to bring its legislation into line with its international obligations.