IHEU calls for strong universalism from UN, in face of ISIS brutality

In its final statement at the 30th session of the UN Human Rights Council, the International Humanist and Ethical Union (IHEU) called on the Council to clearly defend and promote universalism in Human Rights. 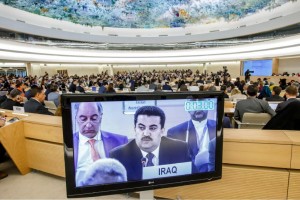 During a discussion which included a UN report on Iraq, IHEU head of delegation, Elizabeth O’Casey highlighted the Council’s failure to robustly defend the types of human rights which are being violated there daily.

She pointed out that whilst ISIS’ actions are more extreme in nature, a number of the Human Rights Council members and observers openly deny the universalism of human rights when it comes to LGBT people and women.

O’Casey argued that we cannot realistically expect change in countries like Iraq if the Human Rights Council refuses to categorically champion the very rights that ISIS is violating. She called on the Council to commit clearly to the human rights of all, regarding of sexual orientation, gender or belief.

The extreme cruelty and violence we are witnessing in Iraq [ref A/HRC/30/66] is so revolting and inhuman that it highlights the Council’s relative impotence to act in the face of such brutality. It also reminds us of our failure to help foster a human rights climate in the affected region. For, this violence is not without context. We might recall that prior to the debauched brutality of ISIS against homosexual men, in Iraq such men were subjected to death threats and torture. Previous to ISIS’ sexual enslavement of women, the Iraqi Parliament drafted a law that sought to legalize rape, prohibit women leaving home without their husbands’ permission, and legalize marriage for 9-year-olds.

The Council’s failure to do more in the face of ISIS is one thing; and indeed, as recognised by the High Commissioner, its resources are severely limited, but its failure to speak out in defence of universal human rights in the face of such demonstrative denial by ISIS [that is, for the human rights of LGBT people and women] is quite another. Its words have normative force. And it owes the Iraqis to use them wisely.

Of course no representative in this forum would say it is OK to throw a man off a building because he is gay. But they would, and have, expressed their abhorrence of LGBT rights.

Of course no representative in this forum would say it is OK to force women into sexual slavery, but they would, and have, denied the existence of marital rape, and continue to include a country with gender apartheid as a member.[1]

The Council needs to say with one clear voice: We are all equal agents in possession of the same human rights, regardless of our gender, what we believe, and whom we love. It needs to promote clear universalism, because without that there is a very slippery slope – a slope that more young gay men will be pushed off to meet their death…