IHEU’s Freedom of Thought Report 2015… “Why should we pamper Saudi Arabia for oil?”

The International Humanist and Ethical Union (IHEU) produces and publishes the annual Freedom of Thought Report, a flagship survey on the legal status and human rights of humanists, atheists and the non-religious in every country of the world.

Hosted by Dennis de Jong MEP, co-chair of the Intergroup on Freedom of Religion or Belief, the IHEU launches the Freedom of Thought Report 2015 at the European Parliament in Brussels (10 December 2015), with Bob Churchill and Elizabeth O’Casey from the IHEU, alongside threatened Bangladeshi blogger Siddhartha Dhar and UN Special Rapporteur Heiner Bielefeldt

As well as press coverage, notably religious media sources (such as Ecumenical News) and coverage from national press in some of the most severely criticised states (such as Malaysia’s Malay Mail), the Report was “clearly and unambiguously” welcomed by the UN Special Rapporteur on Freedom of Religion or Belief, Heiner Bielefeldt.

This year for the first time the Freedom of Thought Report was simultaneously launched in Brussels, Amsterdam and Washington, on International Human Rights Day – 10th December. 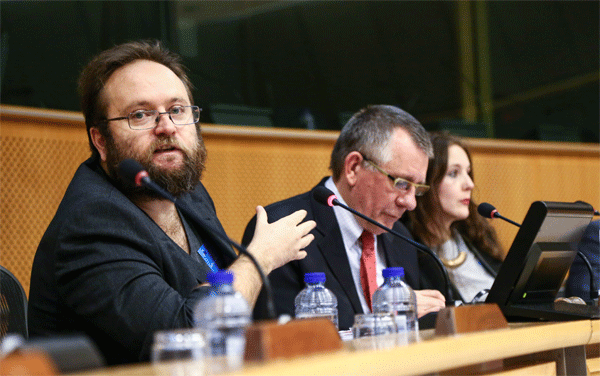 At the European Parliament in Brussels, the Report’s editor, Bob Churchill, outlined the worsening situation for humanists, atheists and the non-religious in many states as described in the Report.

“Recent hate crimes against atheists include kidnapping in Maldives, state harassment in Malaysia, and of course the horrific string of blogger murders in Bangladesh. We record hate speech against “humanists” and advocates of “secularism” and “liberalism”. We record 21 states in the world criminalizing people who change or leave their religion (under “apostasy” laws), and in 13 countries this “crime” in principle carries the death penalty.” 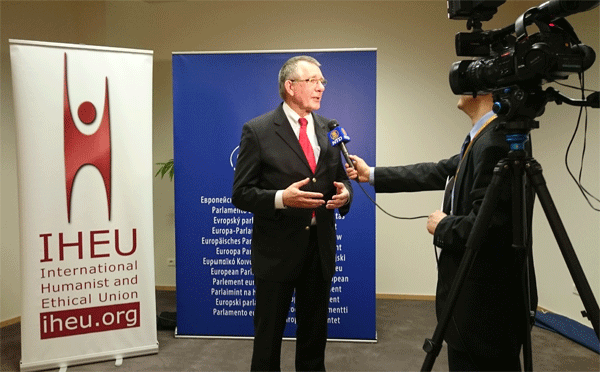 Dennis de Jong speaking to media at the launch event

Responding to the report, Dennis de Jong MEP, chair of the European Parliamentary Intergroup on Freedom of Religion or Belief, said:

“It is unacceptable that not only do states offer insufficient protection against extrajudicial violence, but some states actively engage in the persecution of the non-religious, simply because they express their beliefs, or have adhered to a religious belief in the past.”

Mr de Jong expressed frustration with the “tame” response of Europe in relation to human rights abuses in some of the countries awarded the worst ratings by the Report. Rejecting the political arguments for appeasement from economic necessity, he said:

“Why should we pamper Saudi Arabia for oil? We can be too sweet and moderate, and it’s time the EU gets tough.”

The case of Raif Badawi was raised. Detained in Saudi Arabia since 2012 for “insulting Islam”, Raif was lashed for the first time in 2015, and his lawyer Waleed Abulkhair was moved to an isolated prison. (On the day after the launch, there were reports that Raif himself was moved to a more isolated prison, and was going on hunger strike.)

In response to the evidence of violations presented in the report, the Intergroup has pledged to:

“…put pressure on the European External Action Service to step up its efforts to promote and protect the rights of the non-religious on the basis of the formally established EU Guidelines.” 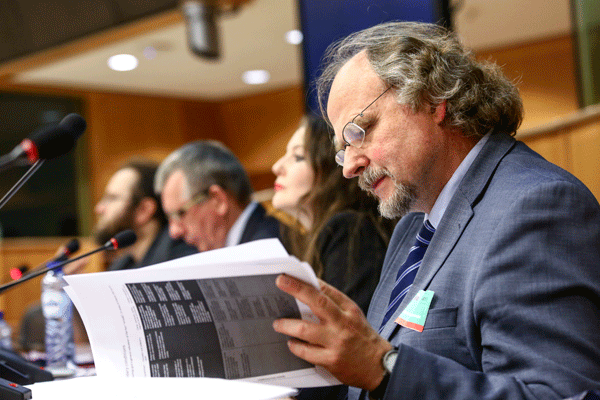 UN Special Rapporteur on Freedom of Religion or Belief, Heiner Bielefeldt, told the meeting that he “clearly and unambiguously” welcomed the report under his “religion or belief” remit. He also stressed that:

He subsequently told the IHEU:

“In all my reports (country-specific or thematic) I quote General Comment no. 22 which clarifies that article 18 of the ICCPR [International Covenenat on Civil and Political Rights] protects theistic, non-theistic and atheistic beliefs as well as the right not to profess any religion or belief.

Formulations such as “religious freedom” obfuscate the scope of this human right which covers the identity-shaping, profound convictions and conviction-based practices of human beings broadly.”

Elizabeth O’Casey, IHEU’s new Director of Advocacy agreed that this ‘thought’ component to Article 18 must include social and political stances, the protection of individuals who dissent from received wisdom and mainstream belief, and those who advocate new ideas, as is so often the case among humanist and secular thinkers, writers, and activists who are targeted. 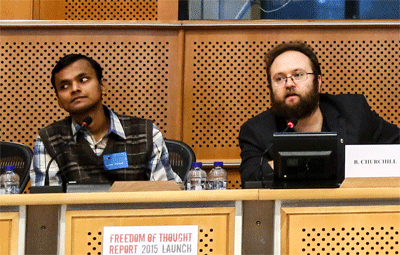 Siddhartha Dhar is a Bangladeshi blogger who escaped the threat to his life by moving to Europe in 2015. He told delegates that, in the face of a string of murders of humanist bloggers and one secular publisher in 2015, “The Bangladesh government maintains a guilty silence as it clings to its policy of appeasing the extremists.”

Remembering in particular his close friend Ananta Bijoy Das who was killed last May, Siddhartha said that Bangladeshi freethinkers would not lose heart:

“For the secular blogging community of Bangladesh, well-being isn’t enough and would become a sordid burden if it was bought at the price of mortification and subordination. We are willing to trade our well-being to attain our goal of establishing fairness, justice and equality. Our resistance has cost us dearly, for so many bright minds lost their lives. Yet the prudent course will be continuing to resist the perpetuating vicious circle of injustice, oppression, degradation and bigotry. Despite all the tragic losses, we are united in our grief and we remain undefeated.” 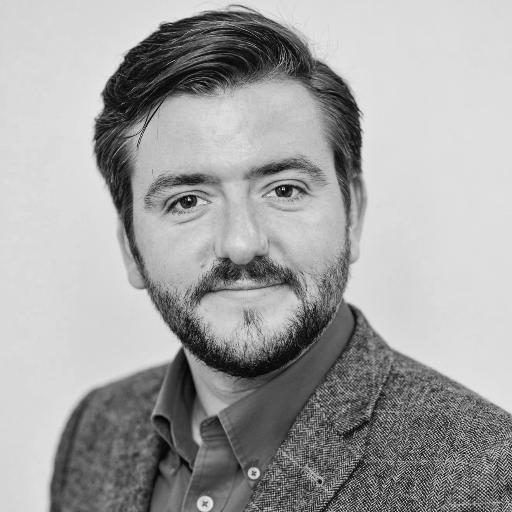 “It was very important to bring together the UN Special Rapporteur, an expert in this field, and an elected European representative who has consistently defended the rights of both religious and non-religious, as well as a Bangladeshi blogger who has escaped the demonstrable threat to his life. This event and the overwhelming weight of evidence as presented in our Report shows that many states are continuing to discriminate against humanists and the non-religious generally in law, and many of the states most egregiously violating the rights of the non-religious are getting worse.

“The human rights consensus is firm, the moral case is clear, the victims of outright persecution are real, and each person who is threatened, killed or imprisoned for their beliefs represents many, many more who are simply unable or too afraid, quite understandably, to speak their minds. I echo Mr de Jong’s call to stop putting human rights in second place to diplomatic niceties and supposed economic realities.” 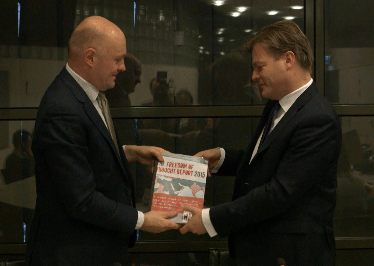 Several people who have suffered the violation of their freedom of belief also told their stories.

Fauzia Ilyas explained how her forced marriage to a man who sexually abused her in the name of Islam made her question religion itself. She founded the Atheist and Agnostic Alliance of Pakistan (now an IHEU Member Organization), and soon after had to flee the country because her family members threatened her life, and the authorities threatened to arrest her for “blasphemy” and being the leader of an atheist group.

Two atheist bloggers, invited by the Dutch Humanist Association for the event, discussed the series of killings of their secular colleagues, urging the Human Rights Ambassador and parliamentarians to lobby the Bangladesh government to protect atheist bloggers.

Fatima El Mourabit, a Dutch-Moroccan ex-Muslim, explained that even in a free country like the Netherlands, rated “Free and Equal” by the Report in terms of formal discrimination, ex-Muslims hesitate to express their (dis)beliefs, out of fear of rejection and social exclusion, or worse, the threat of violence.

The Human Rights Ambassador promised to take up the issue in his forthcoming visit to Bangladesh. Members of parliament were also impressed and promised to continue to press for anti-blasphemy laws at the European Parliament and the United Nations. They also pledged to examine discrimination against non-believers in domestic centres for asylum seekers.

In a leading daily newspaper article (translated here) Boris van der Ham urged religious leaders, politicians and all citizens to express their support for the right to change or leave religion.

The American Humanist Association (AHA) has worked closely with U.S. legislators to raise awareness of the persecution faced by atheists and humanists abroad as well as in the United States. It was work undertaken by the AHA which was developed into the very first edition of the Freedom of Thought Report, and they continue to be a major driving force behind it.

In June, the American Humanist Association hosted a congressional briefing on international religious freedom to raise awareness about threats to the human rights of atheists and religious minorities. The AHA also supports U.S. House Resolution 290, introduced by U.S. Representative Joseph Pitts, which calls for the U.S. to support the repeal of blasphemy laws.

The American Humanist Association pledged to use the Freedom of Thought Report 2015 to continue its campaigning work, lobbying the U.S. State Department, the U.S. Commission for International Religious Freedom and members of Congress. 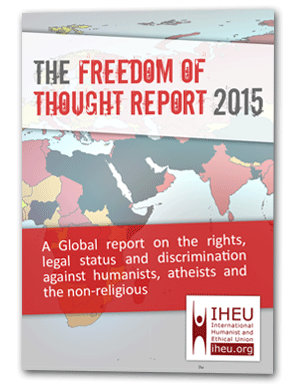 Freedom of Thought : Next steps

The Report is compiled from extensive research around the world, supported by the IHEU’s Member Organizations, and is free to download, especially for use by human rights groups, campaigners, and  policy makers. And in the coming year the IHEU will be making the Report even more accessible, with a dedicated webpage for each country maintained with all the latest developments (not only violations but also any signs of progress).

Following the launches, IHEU Chief Executive, Carl Blackburn, is urging Member Organizations to use the Freedom of Thought Report 2015 to raise the plight of the non-religious and increase the awareness of the press, policy makers, politicians and general public in their own countries. 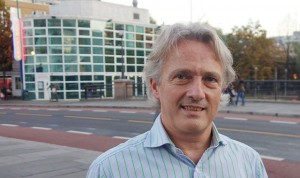 “This important Report is the only one of its kind, and highlights the growing discrimination and persecution of non-religious people in many parts of the world. There are still countries where the “crime” of apostasy (changing or rejecting one’s religion of birth) is punishable by death, and a great many countries still have blasphemy laws which prevent free speech and seek to stifle free thought.

“This is a balanced and well-researched Report, but its findings are far too important for it to simply adorn the shelves of politicians and diplomats. Instead, it should be a campaigning tool and a rallying cry for everyone who believes in fairness, equality and freedom of thought.

“The IHEU is committed to continue the fight for the rights of humanists, atheists and the non-religious everywhere.”