Secular bloggers who fled Bangladesh in fear for their lives, and two survivors of machete attacks, joined human rights organizations at the Bangladesh Solidarity Book Fair in The Hague, Netherlands (Sunday 21 February). 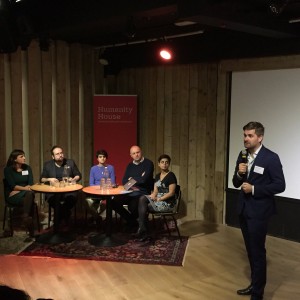 Panel discussion on what can be done about attacks on proponents of humanism and secularism in Bangladesh, with (left to right) Pritha Belle of Hague Peace Projects, Bob Churchill of IHEU, Aura Freeman of Amnesty International, Boris van der Ham of Humanistisch Verbond, campaigner Rafida Bonya Ahmed, and Jakob de Jonge chairing.

The idea for the Solidarity Book Fair originated with a recently exiled Bangladeshi humanist blogger now living in Europe, and the one-day book fair and conference was organized by Hague Peace Projects with support from the IHEU and the Dutch Humanist Association, Humanistisch Verbond.

The public audience met several Bangladeshi bloggers and activists now relocated to Europe. A first panel discussions with the bloggers was chaired by IHEU’s Bob Churchill, followed by a second panel with Rafida Bonya Ahmed and organizational representatives discussing the threats faced by secular intellectuals in Bangladesh, and what the international community are doing now – and could do more – to help.

The bloggers called for more to be done to bring pressure on the Bangladesh government, which is accused of failing to do enough to protect those named on Islamist “hit lists”, or to bring the killers to justice. Rafida Bonya Ahmed spoke about how no one from the Bangladeshi authorities had ever contacted her after the death of her husband in Dhaka last February. In response to atheist bloggers being targeted and killed in the string of attacks, several police and government officials have reminded writers that “insulting” Islam or “hurting religious sentiments” was a punishable offence; the bloggers told the Hague meeting how they were therefore trapped between “a rock and a hard place”, facing the twin threat of violence on the part of Jihadist hit squads, and the risk of charges for “hurting religious sentiments” on the part of the police. 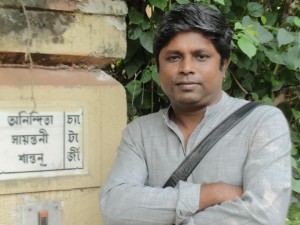 Ahmed Rashid Tutul survived the most recent targeting of secular interests, when his publishing house was hit in by a machete and gun attack on 31 October 2015. He survived multiple machete blows to his head and body.

For IHEU Bob Churchill said, “It was a great honour to meet some of the most at risk bloggers, named on “hit lists”, who have been able to come to Europe, often with the assistance of IHEU and various humanist, human rights, or academic programs. To be able to critically discuss religion is an essential part of confronting some of the extremes of Islamist politics and Jihadi militants. Yet those who do so, face the all-too-clear risk of being targeted by hit squads, or being arrested if their work is deemed “insulting” to religious interests and beliefs.

“Bangladeshi authorities, through their appeasement of Islamist extremists and their complicity in the silencing of critical voices, continue to foster the conditions for violence.”

The Hague event was designed to reflect the national Ekushey Book Fair held annually in Dhaka University, Bangladesh. The Ekushey book fair has long been a focal point for Bengali language rights and literary freedom, but it is also a nexus of opposing forces: the fair is a key event in the calendar for Bangladeshi intellectuals, writers, and readers, and has been the scene of attacks on secular writers — Avijit Roy was killed leaving the book fair last year, echoing the 2004 assassination attempt on Humayan Azad also at Ekushey — prompting secular security measures this year. Police at this month’s Ekushey fair also shut down at least one book stall and arrested three people over a book on Islamic history which they deemed “insulting to Islam”.

You can watch an interview in English with Bonya Ahmed from the Solidarity Book Fair, and there is coverage of the event in Dutch via nrc.nl and at humanistischverbond.nl, and further media in Bengali and English via dw.com. Photography of the bloggers is being obscured to protect some identities, but we hope to make edited videos of the panel events available soon on iheu.org.

The IHEU has been very vocal publicly on the issue of Islamist extremist violence against humanists and freethinkers in Bangladesh during this crisis; we have been speaking on the issue at the UN, organizing an unprecedented joint open letter (reported in Bangladeshi national media) and monitoring and lobbying on the response by the authorities. At the same time, behind the scenes, we have built and maintained an intelligence network of secular Bangladeshi contacts enabling us to monitor, analyse and verify all aspects of the crisis. We have been working with verified individuals under serious threat and with some Member Organizations able to provide local support for relocation. We met with the European External Action Service both to lobby and to advise them. And we were a founding member of a new informal organizational network coordinating between various support and relocation and human rights organizations. Together we are verifying, referring and supporting at-risk persecuted freethinkers whenever we can.

The book fair was followed on the Monday by a closed strategy session with the bloggers, which was fruitful.

Note: Photographs and videos are being obscured to protect some of the bloggers’ identities and we hope to publish edited footage on this site soon.