On International Day for the Elimination of Racial Discrimination, the International Humanist and Ethical Union (IHEU) has called on the UN Human Rights Council to do more to combat and condemn the harmful and exclusionary ideology of populist nationalism. 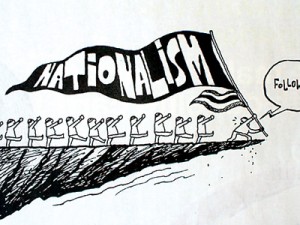 Elizabeth O’Casey, IHEU’s Director of Advocacy, highlighted the dangerous hijacking of religion by some states to create an exclusionary and discriminatory nationalist identity and a destructive use of nationalism to suppress speech and dissent.

With a focus on Russia and Hindu nationalism in India, O’Casey noted how state leaders have been instrumental in whipping up anti-minority sentiment, and fuelling the often extremely violent intolerance of such minorities.

The UN High Commissioner recently noted that when the UN Charter was drafted, it was partly done so in response to a world that had been thrown “violently into imbalance” by “feral nationalisms.”

That was 70 years ago. Yet, we live in a time again when leaders [as observed by the High Commissioner] “are pandering to a simplistic nationalism,” mirroring the “simplified and destructive ‘us’ versus ‘them’ mind-set of the extremists”, and fanning “a rising wind of prejudice and fear.”

Notable is the rise we have seen in European political parties with ideologies grounded in nationalism and populism, and their response to the migration crisis.

State-led aggressive nationalism has been particularly stark in India and Russia. In both instances, we have witnessed a dangerous hijacking of religion to create an exclusionary and discriminatory nationalist identity and a destructive use of nationalism to suppress speech and dissent.

A rise in Hindu nationalism in India under the presidency of Narendra Modi has seen a continuation in the increase of attacks on religious minorities. Statistics on inter-communal violence show a 30% increase in the first half of 2015 with a total of 330 attacks, of which 51 were fatal. This violence has happened against a backdrop of a number of BJP politicians making deeply derogatory remarks about minorities.

The colonial charge of ‘sedition’ has even been imposed recently, in response to the union of students at the JNU University critiquing government policies.

In Russia, a government-led nationalism tightly interlinking state and Orthodox Church – and selectively limiting free speech – has been instrumental in whipping up anti-migrant sentiment, and fuelling the often extremely violent intolerance of religious minorities, such as Muslims from the Caucacus, and LGBTI minorities.

The Durban Declaration is clear in its condemnation of “violent nationalist ideologies based on racial or national prejudice” (para 84). On International Day for the Elimination of Racial Discrimination, we call on the Council to do more to combat the harmful and exclusionary ideology of populist nationalism, particularly in the two aforementioned member states.