Role of secularism must not be overlooked in human rights

The principles of political secularism must not be overlooked as a factor is promoting democracy and human rights, a meeting at the United Nations in Geneva said yesterday. 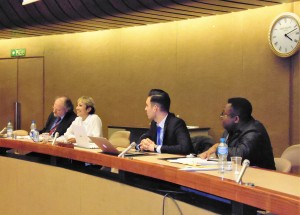 The side-event at the UN Human Rights Council was organized by the International Humanist and Ethical Union (IHEU) and the Center for Inquiry (CFI), cosponsored by Muslims for Progressive Values (MPV) and Christian Solidarity Worldwide (CSW). It was chaired by Elizabeth O’Casey (IHEU), and featured (from left to right) Professor Heiner Bielefeldt, Special Rapporteur on Freedom of Religion or Belief; Ani Zonneveld (MPV); Michael de Dora (CFI); Leo Igwe, human rights activist.

The Human Rights Council has previously adopted a number of resolutions highlighting the interdependent and mutually reinforcing relationship between democracy, rule of law and human rights. But a further component having a role in the realisation of human rights has been far less attended to, namely political secularism.

Though largely ignored by the international human rights discourse, secularism is nevertheless held by many to be necessary (but not sufficient) for guaranteeing inclusivity and ensuring the principles underscoring human rights, such as freedom, equality, dignity and universalism. The aim of Tuesday’s event, “Where politics & religion meet: the intersection of the state and religion within the human rights framework”, was to initiate that discussion on the role of secularism in supporting the achievement of human rights.

Professor Heiner Bielefeldt, United Nations Special Rappporteur on Freedom of Religion or Belief, began the discussion with observations on the phenomena of the ‘politicisation of religion’ and ‘religionisation of politics’. There is a necessary balance, he said, between a public space enabling religious manifestation and influence, whilst not allowing the monopolisation of that public space by any one belief group.

Michael de Dora, UN representative for the Center for Inquiry and president of the NGO Committee on Freedom of Religion or Belief in New York, addressed the case of secularism in Bangladesh and the religionisation of politics there. Reflecting on the Special Rapporteur’s recent report on the issue, de Dora discussed the use of the label ‘atheist’ in the case of many Bangladeshi bloggers under threat, and showed why the situation in the country has been misrepresented by media sources as being between atheism and Islam.

Leo Igwe, a Nigerian human rights activist, looked at secularism in the African context, with a particular focus on evangelical lobbying and witchcraft accusations in states such as Uganda and Nigeria. He discussed the secularist approach that he feels best achieves the balance of the human rights of all within these contexts.

Ani Zonneveld, founder and president of Muslims for Progressive Values, discussed the contention that Islam is incompatible with secularism, and looked at the secular model in terms of human rights and Islamic texts. She argued that Shari’a is incompatible with anti-blasphemy laws and the unequal treatment of women.

Summing up, Elizabeth O’Casey (director of advocacy at the IHEU and vice chair of the UN NGO Committee on Freedom of Religion or Belief in Geneva) said, “As proponents of freedom of religion or belief for all, and critics of those seeking to deny the universalism of human rights on religious and cultural grounds, we have long argued that secular democracy provides a backdrop essential for the prevention of human rights violations and helps ensure that people are seen as human rights agents and not defined primarily by their beliefs or arbitrary characteristics.

“Accordingly, I have found the absence of a discussion of secularism at the international level, particularly with reference to human rights, notable and regrettable. W 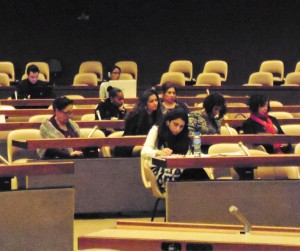 e were therefore delighted to have the UN Special Rapporteur, Professor Bielefeldt, with us in order to effectively engage with the issue in terms of international rights law on freedom of religion or belief. We hope that the event was the first step in raising and mainstreaming the issue of secularism at the UN level.”

The event evolved out of a written statement, submitted by the IHEU ahead of the March session of the Human Rights Council and an oral statement delivered to the Council in September 2015. You can read our statement, “Secularism and the Realisation of Human Rights”, and our oral statement on the issue.