A Masters student, Nazimuddin Samad (28), has been killed in Old Dhaka, earlier tonight by suspected Islamist militants chanting “Allahu Akbar” as they hacked him to death.

According to local news reports, Nazimuddin, was attacked around 8:30pm Bangladesh time (6 April 2016), while walking home after classes with a companion. Three men intercepted them on a motorbike, hacked at Nazimuddin with a machete, then shot him while he lay on the ground. The whereabouts of Nazimuddin’s companion are currently unknown, and despite the area being described as crowded, the attackers all fled the scene.

Nazimuddin was from Bianibazar, Sylhet, a law student and activist of Gonojagoron Moncho’s Sylhet wing. 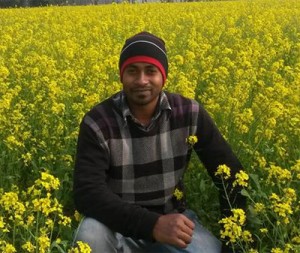 Tributes and alarmed messages are flooding in on Nazimuddin’s personal Facebook page, where he regularly posted atheist and feminist criticism of Islam. He was critical both of the Islamist political parties, and against the failings of the current government. Shortly before he was killed, he wrote a post implying that the ruling Awami League party would fall if it did not make swift changes, writing (in Bengali): “The situation of the country, deterioration of law and order in the country, speak that maybe you cannot stay long in power.”

In earlier posts, Nazimuddin responded to a cleric’s violent speech against women which referenced the Quran, contrasting the speech with the claim that “Islam is the highest honor given to women!” He asked for justice for a girl known as Tonu, who had been raped and killed in the military area of ‘Cantoment’, Comilla.

Nazimuddin recently criticised Prime Minister Sheikh Hasina’s support for madrassa (Islamic schools), which are increasingly associated with Islamist radicalism and militancy in the country. Nazimuddin had also shared posts from Washiqur Rahman Babu who was killed last year in a similar attack, carried out by two madrassa students who claimed they were acting on orders from someone associated with their Islamic schools.

In another post, he proposed a satirical strategy to overcome the aggressive push toward Islamism in the country, writing: “Please let’s have Sharia Law for just five years in Bangladesh. Rule the country with Medina Law. I guarantee you, after this 5 years, no Muslim of Bangladesh will ask for Islamic law! The loss and damage we will have after five years, it will take 1400 years to restore us to a modern country.”

Nurul Amin, assistant commissioner of Sutrapur division police, is reported as saying that the assailants must have kept an eye on Nazim’s activities ahead of the attack, and were aware of his route home. “We are investigating the case sincerely to know the motive of the murder,” he said.

“It is clear from Nazimuddin’s Facebook posts and protest activity that he was a politically and socially engaged young man. He offered criticisms of certain radical religious figures and doctrines, thoughts of a kind that many people, not just atheists and humanists but also many religious people, express all over the world, every day.

“Every time a thoughtful and honest person like Nazimuddin is hacked or gunned down, apparently for doing nothing more than speaking their minds on secularist, political and religious topics, we and others will make a point of finding out what he said, what he did, what he wrote about, and sharing it. It will be seen by more people than ever would have seen it before. And we will remember his name and the growing list of names of those who were singled out and killed, by small-minded, hateful extremists who appear to think that words can be killed. They cannot.”

A post on the Bangla secular blogging platform Mukto-Mona (“Free Mind”) has responded to tonight’s attack saying, “Even though nobody has claimed responsibility for this murder, the modus operandi was very similar to all the killings carried out by the extremist Islamist militants in Bangladesh.”

In 2015, four bloggers variously identifying as humanist, atheist and freethinkers, as well as one publisher of secular books, were killed by groups of men in machete attacks. These men in their writings or ations had all defended freedom of expression and belief, and criticised radical Islamism or particular religious ideas (which they variously regarded as prejudiced or socially detrimental). While this kind of writing and activism, especially where it contains humanistic, atheist or secularist criticism of Islamism, appears to most likely to attract the hit squads, the range of hatred encompassed by Bangladeshi radical Islamists also extends to foreigners and other religions; an Italian aid worker and a Japanese investor were killed in September and October 2015 respectively, an Italian priest was shot in November but survived, and ISIS claimed responsibility for the stabbing of a Christian convert last month ostensibly as a “lesson to others”.

In August 2015, the IHEU coordinated a huge open letter signed by human rights groups, secular and religious civil society groups, and numerous Bangladeshi academics, writers and others, demanding action from the Bangladeshi government to protect those under threat and bring the killers to justice. No response was received, and despite several arrests, no one has been found guilty of last year’s murders. Officials including senior members of the governing party have repeatedly blamed secular activists for “hurting religious sentiments”, which is a crime in the country under the ICT Act.