A young Mauritanian writer, Mohamed Cheikh Ould M’kheitir, sentenced to death for “apostasy” in 2014, will have his appeal heard later this month. However, it has emerged that he will have no lawyer to represent him in the appeal.

The IHEU has learned from a local source that M’kheitir has not been allowed to have visitors or receive books during his imprisonment. We also understand that he has no lawyer for the appeal process (owing to the fear of retribution against anyone who defends the accused ‘apostate’). (Even M’kheitir’s first lawyer during the first hearing had felt obliged to explain to the court that he was compelled to represent the defendant.) 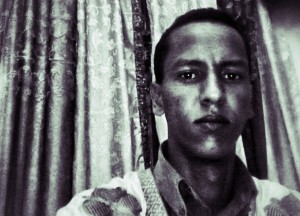 There was a public campaign for the death sentence when M’kheitir’s writing first came to public attention, and a number of religious clerics and political parties have applauded the sentence. A Mauritanian businessmen during one of the protests against M’kheitir reportedly but a bounty of 10,000 Euro on the writer for anyone who could kill him.

Though one news website has recently suggested that M’kheitir might be pardoned, public opinion is still strongly against M’kheitir and presidential intervention seems very unlikely. President Mohamed Abdel Aziz has made something of a political scapegoat out of M’kheitir, previously telling protesters gathered in front of the presidential palace, “I thank you from the heart for your massive participation in a demonstration against the crime committed by an individual against Islam, the religion of our people, of our country. The Islamic Republic of Mauritania, as I have said in the past and I will reemphasize today is not secular and never will be… I assure you that the government and I will spare no effort to protect and defend this religion and its sacred symbols.” The political pressure is broad; after the sentencing, Jemil Ould Mansour, chairman of the ostensibly moderate Islamist opposition party Tewassoul, told a press conference: “This is the case of a criminal who got what he deserves”.

“The treatment that Mohamed Cheikh Ould M’kheitir has received under the Mauritanian justice system is abhorrent. Mauritanian authorities should be aware that the world is watching this appeal and expects that any truly just court will overturn the conviction. Given the level of public acrimony against him, the authorities must also act to guarantee his security upon his release.

The criminalization of ‘apostasy’ is fundamentally an attempt at compulsion toward a particular religion. Everyone has the right to freedom of thought, religion or belief: to consider, to question, to think for themselves, to form their own view of the world, and ultimately to leave or convert between religions or beliefs. By imprisoning and sentencing to death Mohamed Cheikh Ould M’kheitir, Mauritania is fundamentally violating this human right. Mauritania’s penal code Article 306, which establishes the crime of ‘apostasy’ punishable by death, must be abolished.”

When, at the Human Rights Council, the IHEU highlighted the initial trial against M’kheitir in March 2014 (prior to the death sentence being handed down), the Mauritanian delegation responded that there was no need to discuss the death penalty, since he had only been arrested for his own protection. An acrimonious trial, while under lengthy imprisonment, is of course already an unjust way of providing “protection”. And ultimately, if the government every really considered his imprisonment a matter of his own protection, the courts did not get the message…

On 24 December 2014, the criminal court in Nouadhibou sentenced Mohamed Cheikh Ould M’kheitir to death. The trial when it finally came was heard in a single day. The basis of the accusation was an article penned by M’kheitir (see below) which was said to be an “insult” to the prophet Muhammad.

Article 306 of the Mauritanian Penal Code establishes the crime of apostasy punishable by death, with an opportunity to “repent”. M’kheitir denies apostasy and denies that his article was intended as an “insult”, however the court found that the article evidenced apostasy as it  spoke “lightly of the Prophet Mohammed“.

The article over which M’kheitir was accused of “speaking lightly of the Prophet” is Religion and religiosity for “Maalemine” (“الدين و التدين و “لمعلمين). (While derived from the high Arabic for ‘teacher’, maalemine in the Mauritanian context refers to usually darker-skinned people descended from blacksmiths, carpenters and other skilled laborers regarded as “low caste” and still subject to discrimination.)

In the article, M’kheitir compared the ongoing oppression in Mauritania, to the Prophet Muhammad’s own treatment of the Jews of the Hijaz, and questioned other decisions and strategies of the Prophet Muhammad at war. In particular, the article begins by distinguishing religion itself from the claim of religious behavior, then presents stories from Islamic narration, questioning why, in one story, a freed black slave who tried to kill a cousin of Muhammad appears to be unforgivable, whereas others committing similar acts were forgiven. M’kheitir again questions the justice of the Prophet in relation to the story of two tribes; one of them, the Quriash (from which the writer himself descends), the second the Banu Quraidah, primarily Jews. While the Quriash fought against Muhammad, the Banu Quraidah did not, but when Muhammad took Mecca he pardoned Quriash, and killed the Banu Quraidah, calling them pigs and monkeys.

The article concludes by asking Mauritanians to be honest and to admit that religion, religious books, and clerics play a role on all the social issues including issue of slavery, which he refers to by reference to Haratin (a “low caste” ethnic group still enslaved, or informally dependent and indentured to former masters)

The court of appeal set the appeal for Monday 18 April according to local media.

Several Mauritanian websites have previously suggested that the delay in enforcing the execution encouraged the rise of atheism in the country and there remains strong public pressure against M’kheitir.

The People’s Initiative for Nasra, a fundamentalist group, has issued a press release calling for M’kheitir’s death and for the implementation of a comprehensive campaign against atheists in the country on “security” grounds.