Welcome to the IHEU General Assembly 2016

President of the IHEU, Andrew Copson, welcomed delegates to the IHEU General Assembly in Malta today (Sunday 22 May). The prepared remarks follow below.

Welcome to Malta and to the International Humanist and Ethical Union General Assembly.

Malta has seen some incredible social progress in recent years, and I know that the Malta Humanists have been among the progressive voices consistently calling for change, writing letters to the press, and saying the things that need to be said. And their work very much appears to be paying off:

It’s been a few years now since divorce was legalised, in 2011 [October], by a majority referendum. Which I believe means only the Vatican and the Philippines now continue to outlaw divorce.

Then, same-sex civil unions and adoption by same-sex couples was introduced in 2014. In fact we’re just coming up to the two year anniversary of the first same-sex unions in Malta [June 2014].

However! I understand, though, that access to IVF and surrogacy are still banned for same-sex couples. And of course abortion remains illegal in all circumstances – the last country in Europe in which that is the case.

I think all this goes to show two things. One is that progress is being made. I won’t say it is inevitable, but secularization and the humanization of society and therefore politics has been proceeding here in Malta very quickly.

The other thing it shows us is that the Catholic Church will make us fight for every last victory, of course! You get one thing at a time and no more!

There’s a similar story to tell in South America. There is sure and steady secularization, a lot of disenfranchisement with the traditional hierarchy, and of course we’ve seen a big outpouring of democratic sentiments about corruption in recent months. Yet along with the progress, the churches are hardening, there is a new wave of religious fundamentalism – not just in Brazil but in Argentina for example – and perhaps we’ll be looking in depth at that story next year at World Humanist Congress in Sao Paulo. 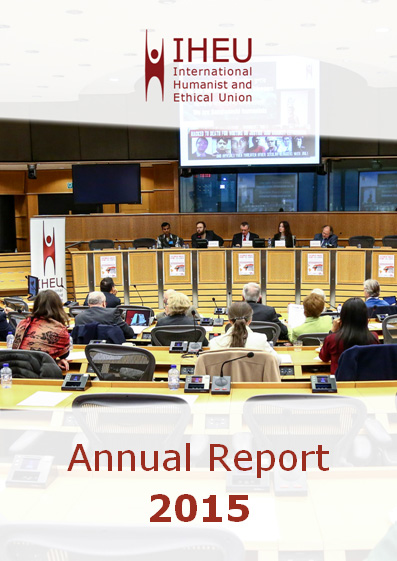 But today we are looking at the workings of the IHEU and the rest of my comments today will focus on that.

As Sonja Eggerickx told you at the beginning of last year’s General Assembly in Manila, after many months of considerations, we were about to advertise for a new Chief Executive role. As of course you know already, Carl Blackburn was appointed in October last year and many of you will have met or talked with him before today. [Hello to the room!]

In addition, Elizabeth O’Casey – who will be familiar to many of you as our voluntary Head of Delegation to Geneva the past few years – has joined the staff team as Director of Advocacy, currently half weeks, mostly around our United Nations sessions. With Carl and Elizabeth working alongside Bob Churchill our Director of Communications, and Colin Divens the IHEU Administrator, this means that we have nearly doubled the staff from two, to three-and-half employees, since the last General Assembly!

We have a lot on the agenda and you have received the new-style 2015 Annual Report alongside your papers, and Carl will be taking us through that later in the day. I’ll just take a minute to show you one element. 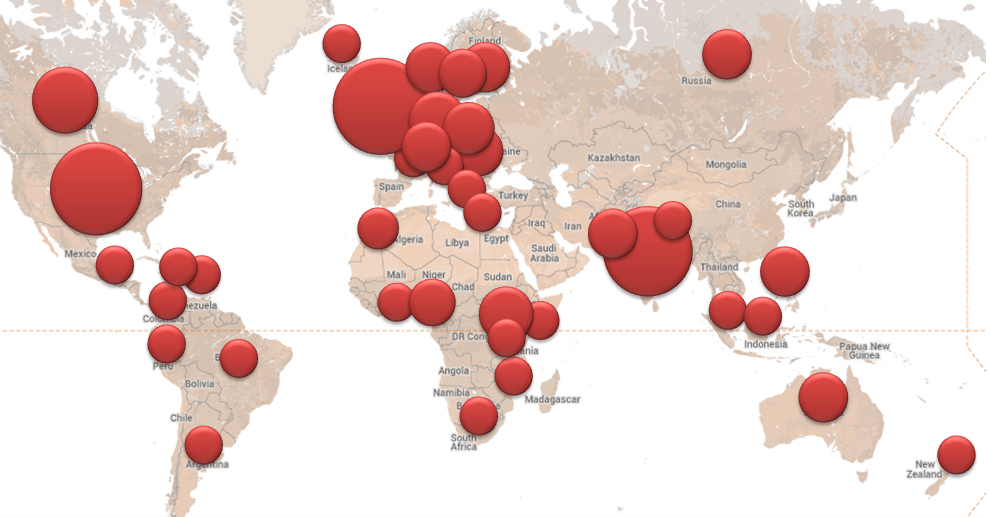 The map here [slide, see the image adjacent] which you can also find in the Annual Report shows the spread of the IHEU membership. The size of the circles represents the actual number of member organizations (of whatever size) in each country. Now, a similar map even just a few years ago would have had smaller circles in several countries and in particular Africa and South America would have been much more sparsely populated. There is still a lot of work to be done, in particular as we continue to develop how we work with humanists in countries across the MENA region and central and eastern Asia. There are really a lot of “ex-Muslim” people and non-religious people in the region, but they are banned from formally registering Humanist organizations for example. IHEU is more and more speaking with and working with individuals and unofficial, online communities there.

Planning for the future

As we move forward today I think it’s worth remembering this map and what it represents. There are the new groups that we must find the right ways to support going forward. And perhaps even more important we must think about the gaps on the map. Bangladesh is one such gap – and who would want to risk being the founder of a humanist association in Bangladesh at the moment! As was discussed in the Bangladesh session yesterday afternoon, this is a trying time for humanists, not just in Bangladesh but across South Asia really. The situation may not be as bad as Saudi Arabia or Iran – yet – but I think it’s right that we must pay particular attention to countries where conditions are deteriorating – and of course not least when our friends and allies are being targeted so horrifically.

We all agree I hope, that we want to continue to grow as an organization, and we want to be working – and working fruitfully – with members in new regions. For over six decades now IHEU has been on a long-term trajectory toward inclusiveness, valuing universality and common humanity, and that desire has always been there in theory. Now, I think that that mission is more important than ever. We want to take the next steps toward greater reach, diversity and inclusion, and we must do that in a way that is strategic, that is secure in the long term, and that best guarantees continued, sustainable growth and support. I’m looking forward to working all that out with you today.

IHEU GA has started with an address by the President, Andrew Copson #Humanists2016 @LondonHumanists pic.twitter.com/cerWr3DkXB