Humanists to Greece: It is past time to abolish “blasphemy” law

Consecutive Greek governments have pledged to reassess or abolish the country’s outdated “blasphemy” laws but have failed to achieve any progress, campaigners have said this week.

In an open letter to the Ministry of Justice, dozens of humanist and secularist organizations from around the world, including the International Humanist and Ethical Union (IHEU) and the Humanist Union of Greece (HUG), have called on the Greek government to follow through on its commitment to freedom of thought and expression, and finally abolish its “blasphemy” laws.

Should Greece waste years prosecuting people for posting images like this? A detail from the satirical Elder Pastitsios Facebook page, one of Greece’s most famous “blasphemy” cases in recent years

“We stand solidly with our member the Humanist Union of Greece in demanding an end to the pointless and unjust legal harassment of people who simply wish to speak their minds.

“Every reputable human rights authority and the EU’s own guidance on freedom of religion or belief agrees that laws against ‘blasphemy’ should be abolished. Such laws are always a mess of contradictions that cannot be applied consistently. When they are applied, usually to prosecute minority voices within society, they always contravene human rights standards by punishing or deterring free expression.

“This is not an abstract problem in Greece – victims of the “blasphemy” laws are being subjected to lengthy prosecutions, trials, and in some cases are found ‘guilty’ of this victimless crime.” 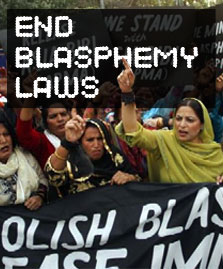 Around the world ‘blasphemy’ laws and taboos may have even worse consequences. As recently as yesterday evening (Thursday 2 June) there has been another ‘blasphemy’-related mob killing, this time in Kano state, northern Nigeria. A woman was reportedly “beheaded” in the marketplace where she worked after being accused of insulting the Prophet Mohammed by an enraged mob.

Andrew Copson comments, “Blasphemy laws must be abolished everywhere but it is particularly inexcusable that any European state, given that the EU supports abolition of blasphemy laws outside of Europe, should still implement them at home. This hypocrisy fans the flames of persecution around the world.”

Last year the IHEU together with dozens of other human rights, free expression and humanist organizations formed an International Coalition Against Blasphemy Laws, running the campaign to End Blasphemy Laws worldwide <end-blasphemy-laws.org>.

The full letter to the Greek Ministry of Justice follows below.

Mr. Kostis Papaioannou
Secretary-General for Transparency and Human Rights at the Ministry of Justice

Subject: Abolition of blasphemy articles from the Greek criminal code

Our organizations have appreciated that, in your concluding statement during Greece’s review by the Human Rights Committee on 20 October 2015, as head of the Greek delegation you made the unprompted commitment that Greece will extend civil partnership to same-sex couples, legally recognize gender identity, as well as abolish outdated criminal provisions such as unnatural indecency (347 Criminal Code) and the articles on blasphemy (198 and 199 Criminal Code).[1]

We welcome the fact that with Law 4356/2015 civil partnership was extended to same-sex couples and the crime of unnatural indecency was abolished, while an experts’ committee was set up to produce a draft law on the recognition of gender identity.

We have been concerned however that the articles on blasphemy were not abolished, while new charges for blasphemy are pressed by prosecutors, for example on 1 February 2016,[2] and the trial on appeal of blogger Philipos Loizos (aka “Elder Pastitsios”), convicted at first instance for blasphemy to a suspended prison sentence of ten months on 16 January 2014, has yet to be scheduled almost two and a half years later.

We therefore appreciated that the delegation to the UN Human Rights Council that you headed for Greece’s Universal Periodic Review expressed on 9 May 2016 its support inter alia to the recommendation by Brazil that Greece “Ensure[s] religious freedom and tolerance, by measures such as decriminalizing blasphemy and protecting the rights of religious minorities, atheists and agnostics.” [3]

We now urge you to see to it that the government promptly tables before Parliament the abolition of the two blasphemy articles 198 and 199 from Greece’s Criminal Code[4] and that prosecutors or courts drop all related charges pending before them.

We thank you in advance for your attention to this appeal and are looking forward to your reply.