On the first day of the 32nd session of the United Nations Human Rights Council, the International Humanist and Ethical Union (IHEU), called on the UN to do more to protect human rights activists, their right to free expression and their engagement with the UN system itself. 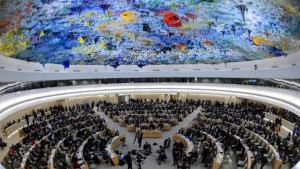 During a dialogue with the UN High Commissioner for Human Rights, Zeid Ra’ad Al Hussein, IHEU Director of Advocacy, Elizabeth O’Casey, highlighted the situation for many individuals seeking to promote human rights across the world, and noted how some suffer from intimidation, threats, and reprisals as a result of attempting to engage with the Council’s work. At the Council itself some states have even been seeking to exclude certain civil society voices from participating in UN meetings, such as those groups advocating LGBTI rights.

O’Casey argued that it is critical that the Council addresses threats suffered by those human rights defenders lobbying the UN once they have returned home. She concluded her statement by paying tribute to those who died and were injured in the attack on the Pulse nightclub on the 12th June.


We thank the High Commissioner for expressing his acute concern about the harassment of civil society organisations and journalists. As he has noted, effective engagement with, and empowerment of, civil society is vital to “give people, including the marginalised, a way to make their voices heard.”

Yet, some of those seeking to engage with this very institution have been targeted, via intimidation, threats, and reprisals, because they highlight human rights abuses in their own countries. Human rights defenders in China, Cambodia, Kuwait, and Sri Lanka have suffered reprisals. Just this weekend, Bahrain, following a predictable pattern, prevented at least six activists from travelling to Geneva to participate in this Council.

In addition, a number of states have made concerted efforts to exclude specific civil society voices from participation at the UN generally; ahead of a UN meeting on ending AIDS this month, the OIC blocked 11 gay and transgender organizations from attending.

Freedom of expression and the right to peaceful assembly are not just rights to be emphasised for individuals across the world within different states, but also for those representing NGOs at the institutional level. Without them, we lose our capacity to stand up for the rights of others and our only current hope of bringing all states to account for their human rights abuses across the world.

This Council has a responsibility to protect those who engage with it from intimidation and reprisals. It also has a duty to ensure the protection of the all-too-vulnerable rights of free expression and assembly. If, as the High Commissioner suggests, civil society engagement can be viewed as a “threshold issue,” it is not at all clear whether this Council currently meets such a threshold…

The High Commissioner mentioned the horrific attack in Orlando. I deliver this statement in memory of its victims; those seeking to exercise their fundamental right to express themselves freely, and lose themselves, on a Saturday night out.